The more visible aid is to Americans, the harder it is for right-wing media to spin racist stories 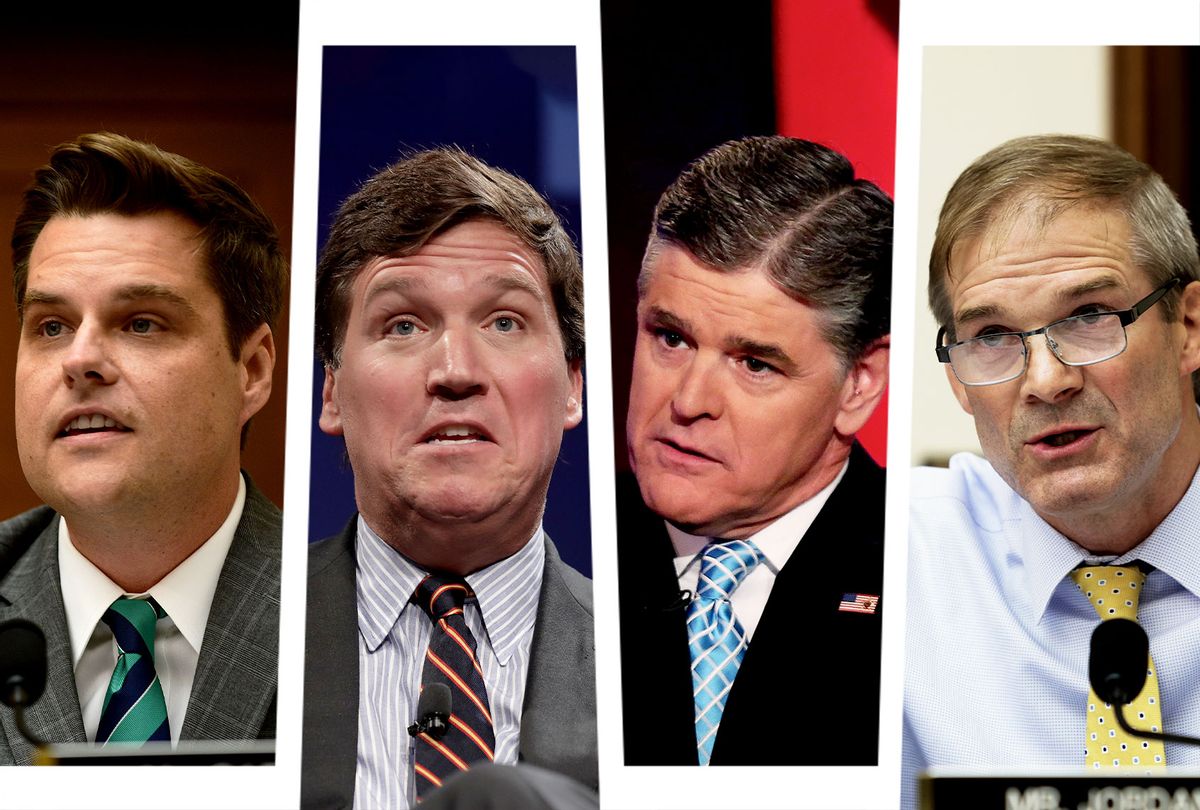 The House of Representatives just passed their final version of the American Rescue Plan, a $1.9 trillion package aimed at ending the pandemic and restoring the economy to a hopefully better condition than it was when the coronavirus first hit American shores one year ago. President Joe Biden, whose White House proposed the draft that was largely adopted by Congress, is expected to sign the bill on Thursday ahead of a primetime address marking the somber anniversary of pandemic lockdowns.

Republicans in Congress, for their part, hate this bill.

Not a single GOP lawmaker voted for this COVID relief bill in either the House or the Senate. One would think that their propaganda apparatus, from Fox News to OANN to right-wing talk radio, would be hair-on-fire furious about it. But instead of trying to form a new "Tea Party", the nickname given the widespread conservative temper tantrum that rose up in the wake of Barack Obama's 2009 economic bailout bill, the response has been relatively muted. This is despite Biden's bill being more targeted towards aiding ordinary Americans and less of a corporate bailout than Obama's economic stimulus more than a decade ago. Instead of throwing fits about the bill, however, the right-wing noise machine would rather talk about anything else.

On Wednesday, Media Matters published an analysis noting that "Fox News devoted just one segment to the" coronavirus relief bill on the same day that this historic legislation passed. As Matt Gertz wrote the day before at Media Matters, this is in contrast with how Fox News reacted to Obama's American Recovery and Reinvestment Act, which was vilified "with an ideological misinformation campaign aimed at convincing the public that Obama was a dangerous radical pushing a Soviet-style vision that would enslave Americans while killing jobs, not saving them."

If you consumed exclusively right-wing media this week — which is normal in red state America — you'd get the impression that the Amerian Rescue Plan is a minor bill, and that the biggest problem facing this country is the onslaught of "woke" people that are stepping on the god-given right of every red-blooded white American to be shielded from criticism for saying racist and sexist things.

This week, Tucker Carlson used his popular primetime show on Fox News to spread racist lies about the death of George Floyd, repeatedly attack a female journalist as supposedly ungrateful for being upset by misogynist harassment, suggest that only emasculated men care about not spreading the coronavirus, and demagogue about the evils of letting pregnant women serve in the military. Fellow Fox News star Laura Ingraham, meanwhile, devoted her Wednesday night show to attacking Prince Harry and Meghan Markle for speaking out against racism, and insisting that the real victims are conservatives because they have to endure criticism for saying racist things. Sean Hannity, meanwhile, kicked off his Wednesday night show floating a conspiracy theory accusing Biden of faking his stutter.

It was the same story at the conservative National Review, whose front page has more stories about the supposed evils of anti-racism and the utterly imaginary threats against Dr. Seuss than about the coronavirus relief package. And the Fox News challenger Newsmax? Well:

Congress passed one of the largest and most transformative pieces of legislation in a lifetime this afternoon.

Here are the top stories on Newsmax's 5 PM show. pic.twitter.com/AvkEyQkZDG

And while there are some half-baked efforts among congressional Republicans to get limp talking points about prisoners getting checks or whining that it's a giveaway to the poor, folks like Rep. Jim Jordan of Ohio and Rep. Matt Gaetz of Florida clearly believe the move is distractions.  They've focused largely on whining about "cancel culture" and trying to start a hearing about Britney Spears being under a conservatorship. While there is much to be said about the latter issue, there is no reason to believe Jordan or Gaetz — both stalwart supporters of forced childbirth — have suddenly developed a concern about women's freedoms. Instead, it's just a naked bid to use celebrity to change the subject from the American Rescue Plan.

As clear of a pattern as is displayed, it remains unclear why Republicans and the conservative media are so scared of talking about the American Rescue Plan. One theory is they don't want to cross their own voters, nearly half of whom support the plan.

NEW FROM @CBSNewsPoll: Three in four Americans approve of Congress passing the American Rescue Plan. Large majorities of Democrats and independents, along with nearly half of Republicans, approve of passage. pic.twitter.com/9Y1b8K6htV

But this explanation is unsatisfying, as right-wing media has a long track record of convincing their audiences to be angry about stuff they didn't care about before. After all, it's not like right-wing audiences were particularly worried about obscure Dr. Seuss books or the branding choices at Hasbro, until Fox News told them to care. Conservative media has a well-worn strategy on how to take popular economic programs and rebrand them so that their audiences grow to hate them: Race-baiting and lying.

The Tea Party was formed because right-wing outlets lied to their audiences, falsely telling them that Obama's economic rescue package was paying mortgages for Black and Latino homeowners, and forcing white people to foot the bill. This was a lie — the banks were bailed out, but the homeowners they cheated were not — but the idea that people of color were getting a benefit they were denied appealed to conservative voters. Similarly, the right-wing talking points about the Affordable Care Act — attacks on the birth control benefit, lies about "death panels" — were about convincing aging white people that the Black president was taking away "their" health care and giving it younger and supposedly less deserving people.

So far, however, conservative media seems to believe they can't just lie and race-bait about this bill until their people hate it. And maybe the explanation for why is a simple one: It's harder to bamboozle their audiences about the American Rescue Plan because Democrats have finally learned to make the aid more immediate and visible.

Biden's plan is a contrast to the economic bailout money of 2009, which flowed in ways that didn't seem to immediately impact the pocketbook of everyday Americans. And while Obamacare eventually became popular, it struggled for years because of the slow rollout of subsidies and Medicaid, the latter aided by Republican governors refusing the Medicaid expansion. Biden's bill, however, wisely starts sending out checks within days of the ink on his signature drying. The vaccination rates are escalating and will likely do so even more so after the money starts to flow from this bill. Biden is hitting the road to highlight the immediate benefits to communities. In fact, the bill is so robust and timely that at least one Republican who voted against it, Sen. Roger Wicker of Mississippi, is already out there trying to take credit for it:

Independent restaurant operators have won $28.6 billion worth of targeted relief.

This funding will ensure small businesses can survive the pandemic by helping to adapt their operations and keep their employees on the payroll.https://t.co/Ob4pRb9Xh4

Now, things may change. Given some time and commitment, right-wing media may finally find some race-baiting narrative to turn their audiences against this bill. But the fact that they seem to be struggling — and talking about anything else, if possible — is a lesson for Democrats: Keep it simple, stupid.

The more visible the aid is to Americans, the harder it is for right-wing media to spin elaborate racist stories implying someone is getting free stuff their audience isn't getting. And the faster people experience the positive effects of a bill, the harder it is to confuse the public about what's in it. Which is all the more reason Democrats needs to eliminate the filibuster and keep passing meaty legislation that makes it harder for the right to change the subject.