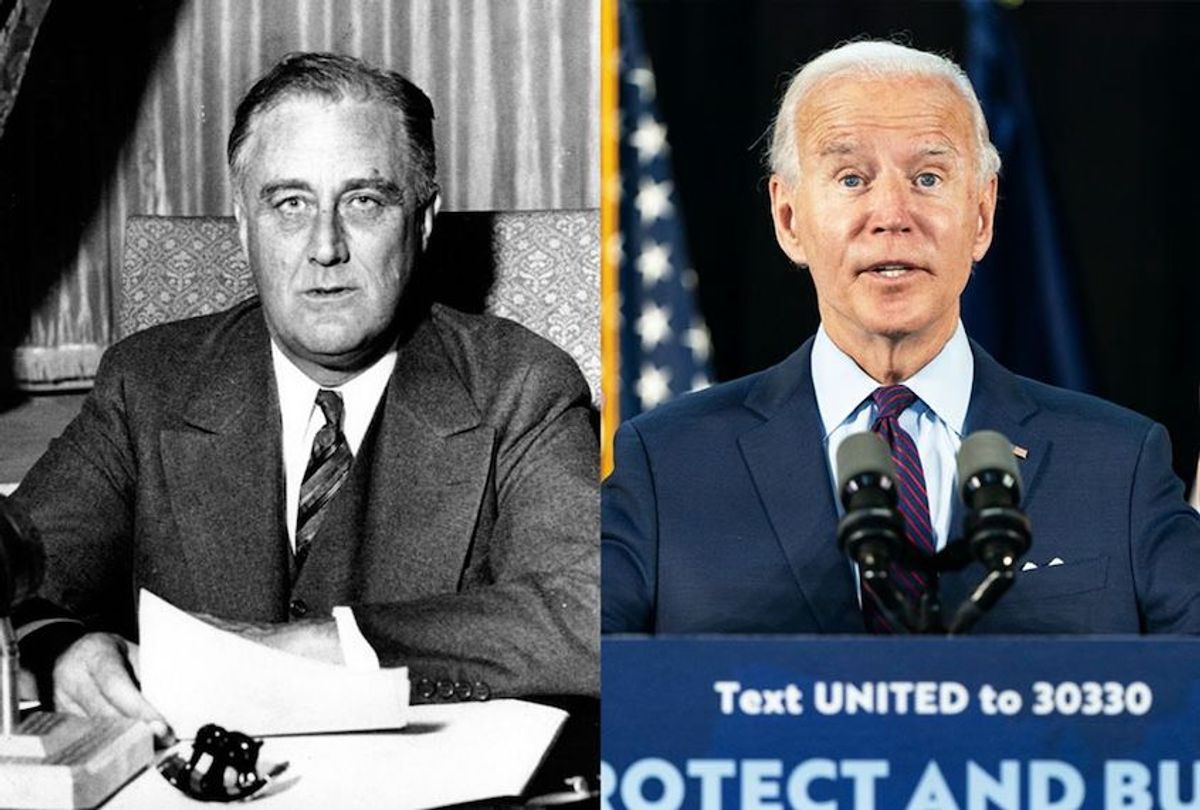 A new book by Jonathan Allen and Amie Parnes about Joe Biden's campaign for president is called "Lucky: How Joe Biden Barely Won the Presidency," which seems like an unnecessarily disparaging title about a man who won a decisive popular vote victory in the midst of a global pandemic. But, I guess, that's just the way politics goes these days. I haven't read the book but early reviews focus on the fact that nobody, even Biden's former boss Barack Obama and former presidential candidate Hillary Clinton (whom the authors call the "vampire in the bullpen") thought he had a chance and were, apparently, not afraid to say so. It sounds like the typical campaign book gossip, which is fine as far as it goes, but the truth is that in 2019 I don't think anyone but Biden's family and team thought he was the strongest candidate to beat Donald Trump.

It was assumed that the 2020 campaign would be a bare-knuckled brawl and that the Democrats should put up someone who would relish going toe-to-toe with Trump. It was going to be a very big show and Biden's old school political style didn't have the razzle-dazzle most people thought would be necessary to compete with The Trump Show. But, as we know, everything changed in the first months of 2020 and the world suddenly got very serious. I don't know if the Democratic electorate had some sort of collective instinct or it was, as the title of the book implies, just a matter of luck, but in that moment of great fear and anxiety, Joe Biden, with his years of experience and what felt like calm, compassionate wisdom, rose to the top of the field and eventual victory.

That weird political moment provided an opening for a leader with empathy, the word that's so often referenced in relation to coverage of Biden that it's become like his middle name. But I wouldn't call it lucky.

With the country reeling from five years of a bizarre political circus topped off by over half a million dead and an economic catastrophe for tens of millions, good presidential leadership requires equal measures of humanity and competence. And while I think most people had confidence in Biden's ability to handle the first, the second was harder to predict. So far, it's looking pretty positive on that front as well.

Because Trump couldn't bear to admit he'd lost and insisted on contesting the election, Biden didn't have a normal transition. And the congressional Republicans' outrageously undemocratic behavior during the post-election and insurrection did not bode well for any kind of productive cooperation between the two parties. Nonetheless, Biden confidently proposed the American Rescue Plan and invited Republicans to the table to offer their ideas. When they showed they had no intention of negotiating in good faith, he accepted that and gave the green light for the Democrats to move the bill as quickly as possible. We are, after all, in the middle of a crisis. Biden signed the bill on Thursday and as Salon's Jon Skolkik reports, it is very popular.

Biden gave his first primetime address to the nation after signing the bill to note the one year anniversary of the pandemic and announce some new goals for his administration, namely that vaccines would be available to every American by May 1st and, if all goes well, we should be able to gather together with some degree of confidence and safety by July 4th, Independence Day.

The White House also announced that checks will start going out to people this weekend. It's been an impressive, productive, 50 days.

Last week Bloomberg reported that Biden has quickly reshaped the presidency in his own image as a contrast to his predecessor. And polling shows that the public approves of what they are seeing — a return to a traditional presidency. But that anti-Trump style doesn't mean that Biden simply plans to undo all of Trump's policies so he can restore the Obama legacy. As Bloomberg's Jennifer Epstein puts it, Biden's so far "unobtrusive presidency masks his desire to dramatically reshape the country." While we don't know how possible it's going to be, that appears to be true, and I don't think that's something most of us expected of him. He just doesn't seem like a transformative guy. And maybe that's his secret weapon.

The truth, however, is that we are in a period that would offer this opportunity to any leader who has the guts to pursue it. Republican "small government" ideology is moribund and they have cast their lot with demagoguery and manipulation of the voting system to fill the void. More importantly, many of the economic assumptions that undergirded that ideology have proven to be useless at best and destructive at worst, particularly in a crisis. Zachary D. Carter, the author of "The Price of Peace: Money, Democracy, and the Life of John Maynard Keynes" wrote in the New York Times this week that the only reason the US economy didn't completely collapse this past year is because the government rediscovered Keynes' fundamentals:

Trump was worried that an economic crisis would destroy his re-election prospects and because the stock market was crashing and their donors were panicking, the Republicans did the right thing for a change, despite their self-interested motives, and the first couple of rounds of coronavirus relief passed with bipartisan support. They staved off disaster using traditional Keynesian principles and the Biden administration has taken the necessary next steps with the American Rescue Plan to restore the economy as we emerge from the crisis.

But it's the latter part of Carter's comment about the government getting out of the way for decades that pertains to this big Biden agenda. He points out that while the worst of the possible economic disaster was headed off by government action, the overwhelming disaster of Trump's response to the public health crisis was driven by decades of government neglect, largely due to the dominance of right-wing laissez-faire economics:

The trouble was not spending too much ahead of the crisis, but spending too little — on research, infrastructure and manufacturing capacity...[T]here is more to Keynes than deficits: He was, above all, a thinker for an age of crisis. No one could predict the future, but maintaining state-of-the-art information, transportation and medical infrastructure through sustained public investment could prevent a problem from becoming a calamity.

President Biden has a big agenda that includes working toward equity in race relations, repairing America's relationship with its allies, immigration reform, etc. His role as consoler-in-chief is obviously a priority for him and the country. But his clunky campaign slogan "Build Back Better" seems to be what animates him on a policy level.

If this president who was elected as a return to traditional politics follows that part of the Keynesian model he could end up being the most transformative president since FDR. If that happens, the lucky ones will be our kids and grandkids.