How many GOP House members are mired in conflicts of interest? No one knows 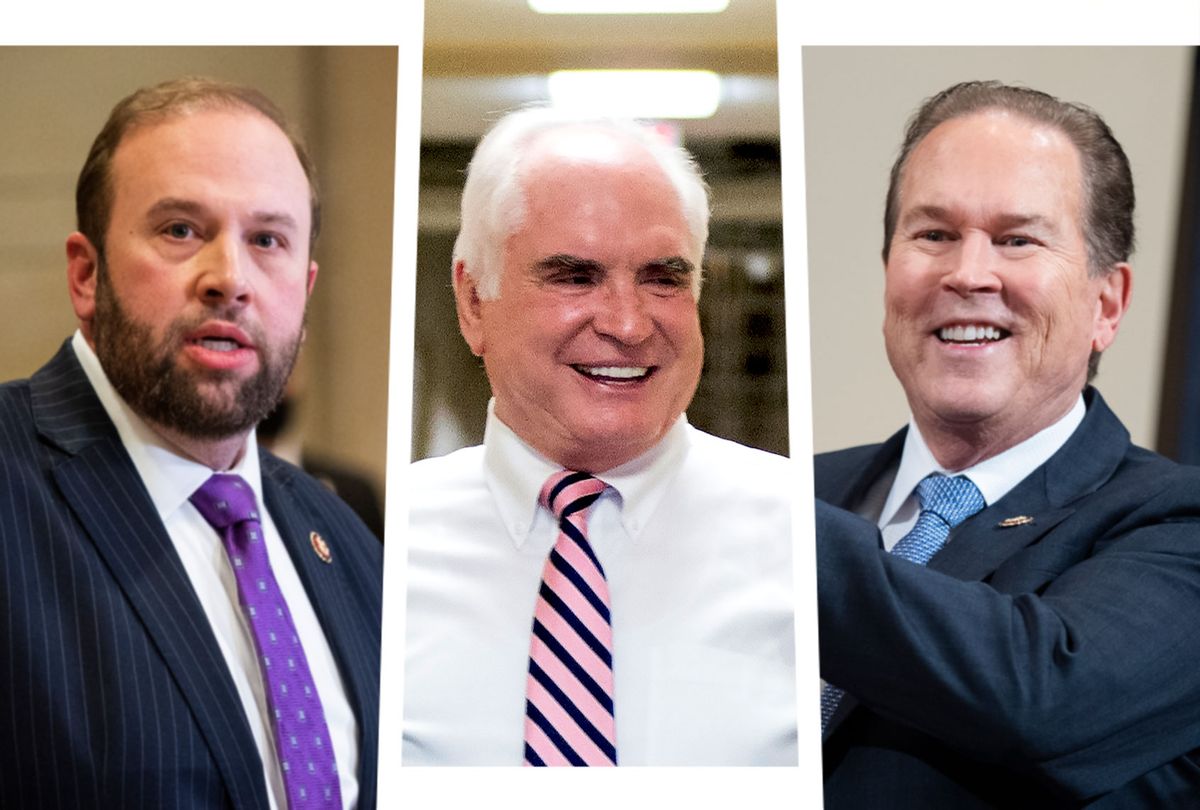 After Congress passed the Paycheck Protection Program last year, pumping billions of dollars into small businesses struggling under the weight of the pandemic, reports surfaced that sizable chunks of that money went right back into the pockets of Congress. A slew of members, many of them already wealthy, received millions in federal aid for their personal businesses ventures under the auspices of job-saving. That reanimated debate about a longstanding, conflict of interest entrenched within the legislative branch: Members of Congress can hold positions in for-profit corporations while officially serving their constituents in Washington.

Senate ethics rules address this conflict —but the House does not. Senators are prohibited from "from serving as officers or members of the board of any publicly held or publicly regulated corporation, financial institution, or business entity." No such stricture applies to members of the House. Rules restrict all members of both chambers from making 15% in excess of their salaries in "outside earned income," but passive income derived from investments and holdings doesn't necessarily count.

According to a six-month investigation released by Sludge in early February, about a quarter of all House members hold positions in private, for-profit companies, serving as partners, board members, vice presidents or even presidents in corporations that span the industrial spectrum, including finance, agriculture, the automotive sector and more. It's no huge surprise that Republicans are disproportionately represented in these roles.

In 2017, for example, Rep. Vern Buchanan, R-Fla., held significant positions in 29 small businesses, according to the Sludge report. Buchanan, who worked in business for 30 years before his 2012 election to Congress, earned as much as $20 million in 2018 and has an estimated net worth of $74 million, eighth-highest in Congress.

In 2016, Buchanan sponsored the Main Street Fairness Act to "ensure that small businesses never pay a higher tax rate than large corporations." No doubt that sponsorship was intended to make the congressman appear to be looking out for the little guys, but Buchanan — who represents an affluent district on Florida's central Gulf Coast — never mentioned that the bill could have personally saved him millions in taxes.

Rep. Mike Kelly, a Pennsylvania Republican who received a PPP loan of up to $1.5 million, offers another interesting case study. In a research paper published in 2018, the Democratic Congressional Campaign committee found that Kelly had made anywhere from $669,000 to $2.1 million from his auto dealerships between 2011 to 2017. In 2015, Kelly spoke on the floor of the House in support of a bill that would have allowed his business to rent or lease cars under recall. "There is not a single person in our business that would ever put one of our owners in a defective car or a car with a recall. But that could happen. That could happen," he assured the House. In 2019, Action News Investigates discovered that indeed it had happened: Kelly had offered for sale at least 17 vehicles with active recalls.

In 2018, Kelly also fought for a tax reform bill that decreased the burden on auto dealerships. The bill — termed the "Kelly Kickback" by opponents — passed the House after the National Automobile Dealers Association named it the group's "highest priority." The association, perhaps not coincidentally, has donated some $55,000 to Kelly's congressional campaigns.

Many these conflicts of interest, however, go unnoticed. For example, in November of last year, Rep. Jason Smith, R-Mo., sponsored the FAIR Meat Packing Act to "provide incentives for livestock processing facilities." The bill sought to credit "an amount equal to 25 percent of the basis of each livestock processing facility property." According to Smith's financial disclosure forms from the previous year, he has an ownership interest in Smith Land & Cattle Company, LLC, which is registered under his name. Until now, no one appears to have noticed this apparent conflict of interest, and there was no discussion of Smith's commercial background or business interests when the bill he sponsored was debated in Congress.

Liz Hempowicz, policy director at the Project on Government Oversight, told Salon it would be "incredibly naive to assume" that House members' business interests are "not playing any role in the decisions members are making."

One reason these conflicts are underreported, Hempowicz said, is because the information is so "decentralized." Identifying such conflicts "would really require going through each member's voting record, every floor statement they're making, and all the various ways we have to try and understand what's going on in their minds when they're making decisions."

The legwork required to unveil every member's possible conflicts of interest would be nearly insurmountable, Hempowicz said, both because there are so many ways officials can support bills and also because there are layers of opacity that prevent the average person from pulling back the curtain. For example, many of the corporate entities listed in financial disclosures have generic or nondescript names, making them especially difficult to track down. Furthermore, privately held companies are not required to disclose their financial activity to the public, which makes it nearly impossible to prove beyond a doubt that they have benefited from a particular member's voting record or policy positions.

This lack of transparency in how members of Congress conduct their business dealings is particularly salient now, in a historical moment when trust in democratic institutions is abysmal. According to a Gallup poll conducted last year, just 25% of the American public held "confidence in the institutions" of government.

"It's no secret that there's this perception that members of Congress are driven by their own incentives — whether those are financial or professional," said Hempowicz. "Whether or not that perception is accurate, that is the perception, and it's incumbent on members of Congress to take whatever steps they can to address that."

Currently, a significant pressure campaign — both within and outside Congress — is demanding greater accountability and transparency in the legislature. One major step forward is contained within H.R. 1, or the For the People Act, an omnibus political reform bill which, among other things, would overhaul campaign finance and ethical rules for both the Senate and the House.

"H.R. 1 will set a new tone in Washington and usher in an era of greater political transparency and accountability," sponsor Rep. John Sarbanes, D-Md., told Salon. "It will help ensure that members of Congress put the public interest first — not their personal financial interests or wealthy and well-connected special interests. Chief among these new ethical standards will be a ban that precludes members of Congress from serving on for-profit boards."

Given the bill's enormous scope, however, it can't possibly address all the real or potential financial entanglements of House members. "H.R. 1 is a good start when we're talking about congressional ethics," Hempowicz said, "but it definitely wouldn't solve all these problems."

For example, H.R. 1 would mandate that members of Congress "may not serve on the board of a for-profit entity." However, not every member of Congress who holds a position in a for-profit entity sits on its board. Many of the small, privately-held companies listed in House members' financial disclosures don't even have boards, as reported by Sludge. Furthermore, major corporate officers, such as CEOs or CFOs, don' t always sit on company boards, a distinction not addressed by H.R. 1.

While the bill is decidedly imperfect, it has strong support from law and public policy organizations, which have hailed it as a solid first step. "Historically, Congress has exempted itself from a fair number of ethics and accountability and transparency laws that it's applied to the executive branch," said Martha Kinsella, counsel in the Brennan Center's Democracy Program. "For instance, Congress is exempt from the Freedom of Information Act. There has been some movement over the years to change that double standard, and the ethics provisions in H.R. 1 are a big step forward."

A new provision was recently added to the bill that largely mirrors the language used in the Senate Code of Official Conduct. It reads:

This provision might prove especially consequential with respect to spousal involvement. Many members' financial disclosures suggest that the members' conflicts of interest extend to their families. Some members jointly own businesses with spouses, siblings or adult children, or employ them as workers.

H.R. 1 currently has support the support of every Democrat in the House. Republicans, however, are determined to stop it. Senate Minority Leader Mitch McConnell, R-Ky., claimed the bill would enable Democrats to "grab unprecedented power over how America conducts its elections and how American citizens can engage in political speech." According to a recent Data for Progress poll, 70% of Democratic voters said they would back the bill — and even among Republicans, the number was a startling 57%.

"I think the bill will pass the House," said Hempowicz, "I think the Senate is a big question mark. It really comes down to whether Democrats are going to get rid of the filibuster."

Indeed it does. "We think that the filibuster in general poses real problems to democracy," Kinsella told Salon. Given that Democrats do not seem resolved to ditch the filibuster despite considerable pressure from progressives, H.R. 1 may well be a dead letter for now.

There are other ways for the House to hold its members accountable. Adding the "pecuniary interest" passage from H.R. "would be as easy as amending the House rules," explained Hempowicz. "They can amend their own rules to include that prohibition whether or not H.R. 1 is signed by the President ... It would also be much more difficult to vote against that. You don't want to be the member voting against a conflict of interest prohibition."

As the apparent gap between members of Congress and their constituents continues to widen, the need to instill some sense of greater transparency, accountability and credibility becomes ever more urgent. "We're in a real moment of reckoning when it comes to these issues," said Hempowicz. "The legitimacy of our legislature really relies on the public having some kind of faith that the actions their elected officials are taking are in the public good."

The offices of Buchanan, Smith and Kelly did not respond to Salon's requests for comment.