This is why we need government that actually works 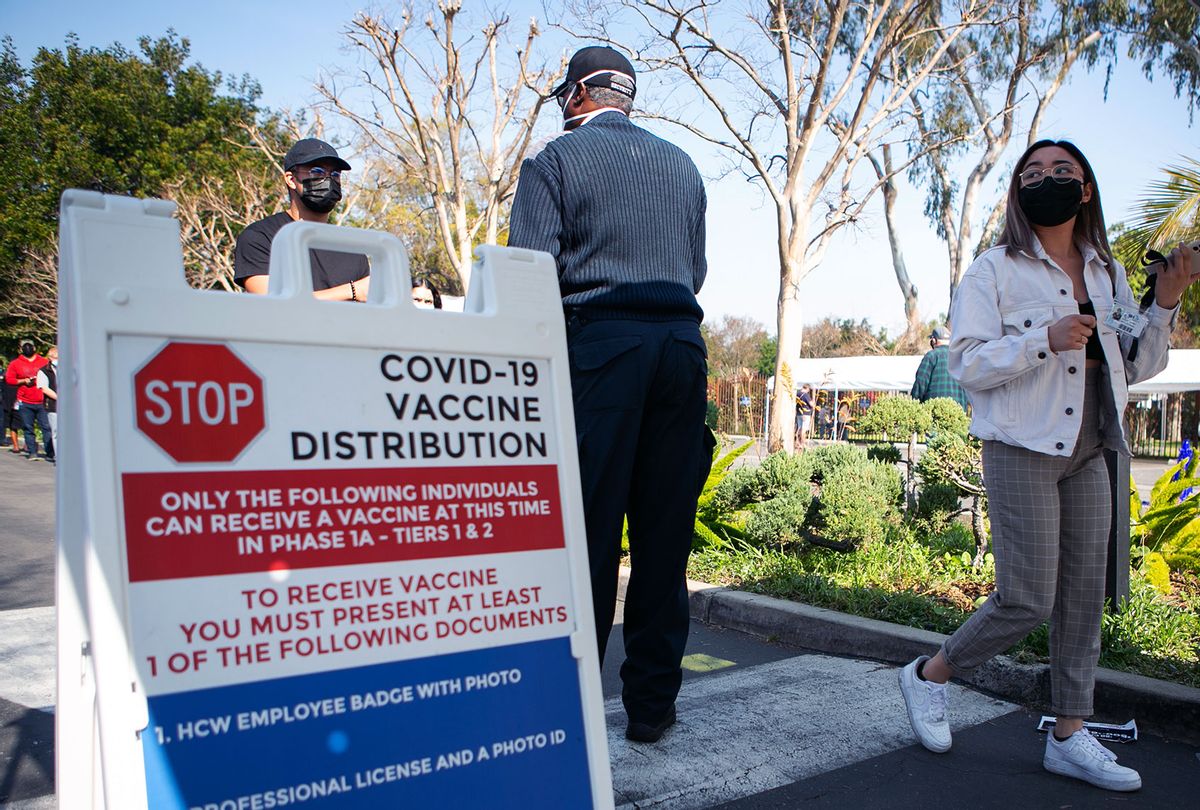 Hundreds of people line up for their turn at receiving the COVID-19 vaccine at Kedren Health on Thursday, Feb. 11, 2021 in Los Angeles, CA. (Jason Armond / Los Angeles Times via Getty Images)
--

We don't have to look very hard to see some common themes running through the Texas freezes, consternation over school re-opening and the worries over significantly unseen recent cyber-attack on U.S. government agencies and private company networks.

In fact, at a glance, there's a recognizably simple demand on the table that we have a government that can anticipate emergencies, plan for them and stand ready to execute, rather than suffer the talk of lawmakers who insist on throwing the inevitable verbal bombs about ideology. Thinking otherwise, that we can stint on investment and preparation is as effective as sticking your head in an oven and yelling.

For Texas Gov. Gregg Abbott and Fox News commentators to spend their time blaming wind turbines for years of forgoing investment in a weather-resistant statewide electric grid dependent on fossil fuel sources is not only silly; we now see it is dangerous.  The state's insistence that Texas remain out of the two national electrical grids to avoid federal rules has come home to roost.

Having spent a lot of years overseeing news, production and technology issues in newsrooms, I can assure you that emergencies don't just get dealt with spontaneously. They require procedures and investment to invoke when they are needed. That Y2K deadline that passed without serious incident in 2000, for example, was not the result of luck; the lack of problems resulted from months of planning and rebuilding.  The ability of The New York Times, where I worked, to continue publishing digitally and in print despite a blackout that hit a large portion of the aregion required adaptation, but came about because we had anticipated such a problem.

That decision by the Donald Trump White House to shut down its National Security Council pandemic office had consequences in delaying the response to coronavirus. This raging debate we're having about whether teachers must be vaccinated before schools open overlooks the obvious need to look at having appropriate ventilation in aging school buildings.

Add into emergencies our incessant need to find blame – usually skewering a political foe – and you have the legends of hurricanes dating back to Katrina, wildfires in California, floods, tornadoes and even terrorist attacks. You have all the effectiveness of a Donald Trump throwing paper towels to workers in Puerto Rico.

For Governor Abbott to attack the aspirational Green New Deal proposals for climate while people are freezing in their homes doesn't help make either heat or water start working again. It just makes him look as if he is trying to use the problem for partisan political points, which he is.

Even worse, his predecessor, Rick Perry, unbelievably the U.S. Energy Secretary under Trump, says that for Texans to go days without power is a sacrifice they should be willing to make if it means keeping federal regulators out of the state's power grid.

Whether for freezes or hurricanes, pandemics or terror attacks, Americans want to be able to count on some government agency to have anticipated the issue and to be ready to act.

With the climate changes now worsening every major storm, it is anticipatable that we will be seeing more severe effects on systems of all kinds. With rising tensions and rivalries in international relations, we've long expected that our military and national security agencies will have adjusted to whom they are listening.

With months of anti-election organizing and actions by pro-Trump forces who refused to recognize the November elections, we should have been able to anticipate a problem that became the Jan. 6 swarm on the U.S. Capitol.

The Texas story is pretty straightforward: "What has sent Texas reeling is not an engineering problem, nor is it the frozen wind turbines blamed by prominent Republicans. It is a financial structure for power generation that offers no incentives to power plant operators to prepare for winter. In the name of deregulation and free markets, critics say, Texas has created an electric grid that puts an emphasis on cheap prices over reliable service," reports The Washington Post.

In the case of the coronavirus, it was an insistence by the feds for the states to deal with the problem. With Joe Biden, we finally have a plan rolling out, though it too is drawing complaints about speed and uncertainties about when it will be complete – as if that is the only goal. We remain unprepared for changes in climate, immigration, population, manufacture and education.

With all that in mind, it seems more than weird that we have not yet moved very far in Congress on adopting the coronavirus aid package, though it is inching along as a one-party proposal. How do we square having general upset in the country over a patchwork of half-open, half-closed schools if we are not providing the funds to ensure safety for students, teachers and staff? For that matter, how do we account for Americans refusing to wear protective masks in the name of personal convenience and resistance to government orders?

We are ready at the drop of any hat to be insistent on immediacy without doing the work or raising the money. We'd rather find fault with our partisan foe than try to put in place the institutional network that would help us to succeed.

Only now are we really assessing the effects of those cyber-attacks thought to have been directed by Russia, and already we have questions about when damages still being assessed will all be fixed.

The takeaway here is equally straightforward: If we want immediate response to public problems, we need the work – and the will – to be ready. In most cases, we have neither.