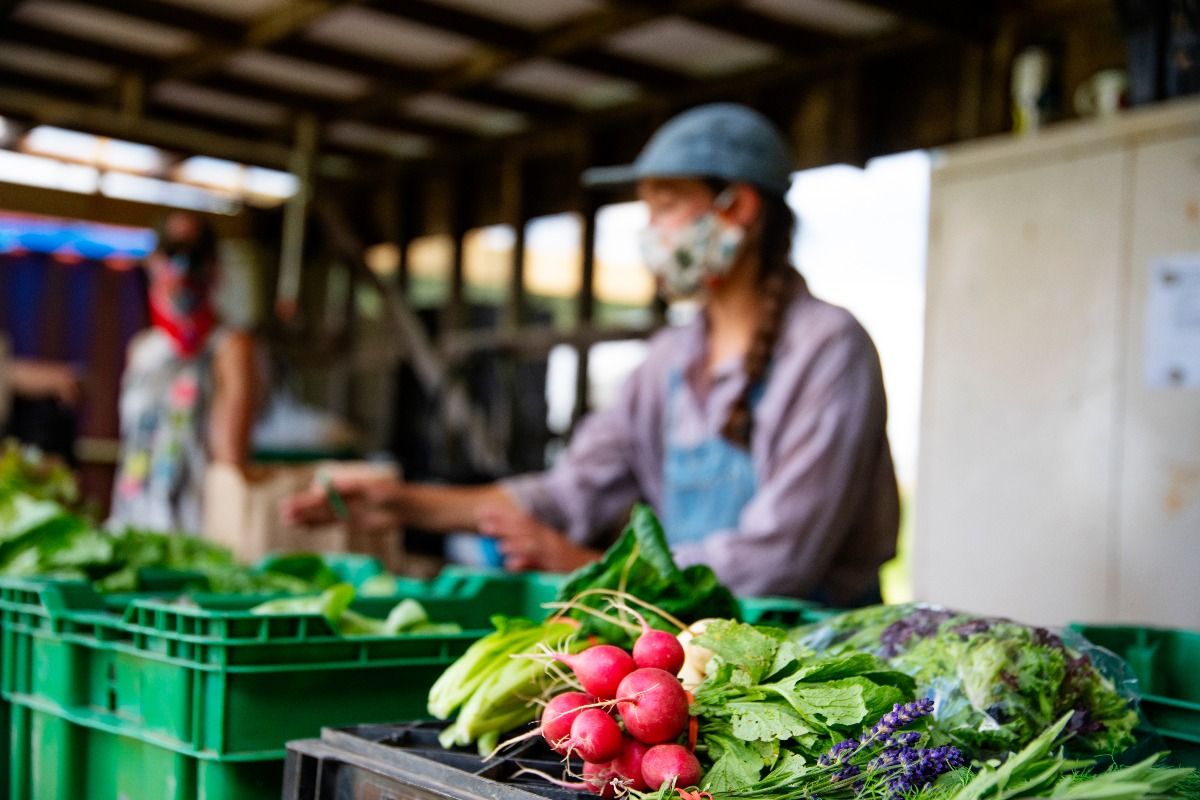 A farmers market in operation during COVID-19. (Getty Images)
--

Before the coronavirus hit last year, many shoppers in the US had little understanding of the people who picked and processed their food. But by April, as meatpacking facilities shuttered and food shortages hit grocery stores, the food workers and farm laborers — now designated essential — became more visible than ever before. National publications including Time, Vice, The New Yorker, and NPR began spotlighting the plight of these workers during the pandemic, sharing stories about farm laborers who continued to show up to work for fear of losing their jobs; migrant workers who were contracting the virus in record numbers; and food processors working without personal protective equipment or proper distancing protocols.

This week, the Food Chain Workers Alliance (FWCA) released a report showing just how much COVID-19 has impacted workers across the food system and highlighting how these essential workers have received few protections on the job. Workers, who come predominantly from communities of color, have gotten sick and taken the virus home. At the same time they've had little access to healthcare and have been excluded from many economic stimulus programs. As vaccines roll out and Congress debates the next round of economic relief, advocates for workers in the food system are working tirelessly to make sure that food and farmworkers are not left behind. Moving forward, advocates, like those working with FWCA, are pushing for change in several priority areas that they say will help protect food and farmworkers during and after the pandemic.

Food and farmworkers should be prioritized for vaccination

Since distribution began in December 2019, about 13.5% of the US population has been vaccinated against COVID-19. While medical workers have generally gotten the first doses, other essential workers, including those in the food system, were included in the Centers for Disease Control and Prevention's recommendations for priority vaccination. By the numbers, jobs in the food system have been some of the most dangerous when it comes to virus exposure: outbreaks in meatpacking plants and other food processing facilities have infected nearly 90,000 workers. Food workers are clearly in need of priority vaccination.

But not every state has given food workers that needed attention. In New York, grocery workers were given priority, but farmworkers were not, with officials citing low supply. And in Florida, food system workers are slated to receive the vaccine after the state's large elderly population. Advocates there point to the high rate of positive tests among farmworkers — up to 30% in some areas — as evidence that agricultural workers are in real danger.

Some workers in Florida also face an additional barrier: receiving the vaccine requires proof of residency. As many workers are undocumented or lack permanent residency, they won't be able to recieve it even when foodworkers do become eligible for vaccination. This highlights a broader problem faced by undocumented food system workers around the country: despite their essential designation, they still suffer from discriminatory policies. Nebraska's governor indicated in January that undocumented meatpacking workers wouldn't be eligible for the vaccine, stating his narrow viewpoint that these workers shouldn't be in Nebraska at all.

But advocates point out that the virus doesn't infect based on immigration status, and putting undocumented workers at the back of the line needlessly endangers people who are already poorly compensated for their difficult and dangerous work. Leaving so many people vulnerable to infection isn't just unconsionable: considering about half of all farmworkers and many other foodworkers are undocumented, it also undermines the stability of the entire food system.

Recognizing that Nebraska's meatpacking industry wouldn't be able to operate without undocumented workers, the governor's office walked back his statement, clarifying that undocumented workers would be elligble after their coworkers with formal legal status. But still, advocates feel that even this might make vaccination — much like medical care or worker's compensation — into something that undocumented people are afraid to access for fear of deportation. With supply projected to go up as more vaccines gain approval, it's critical that food workers (regardless of legal status) be given priority. Timing is critical, and making sure that food workers get early access would both save lives and make the food supply more secure.

Meatpacking plants and farms must be made safer

The Occupational Safety and Health Administration (OSHA) was originally designed to create and enforce workplace safety standards across multiple industries, including farming and food processing. But with its ties to industry and disdain for regulation, the Trump administration's use of the agency was extremely limited, even before the pandemic. The number of OSHA inspectors fell steadily to its lowest number in 45 years through 2019, and the number of workplace safety inspections dropped as well. Jobs across multiple industries became more dangerous as a result: 2019 saw more than 900 investigations into fatal or catastrophic workplace accidents, many of which occured in food processing.

Meatpacking was one notable beneficiary of the Trump administration's eagerness to deregulate. Meatpackers pushed for increases in slaughter and processing line speeds, which are capped by the Department of Agriculture (USDA) to prevent injury and ensure adequate food safety inspections. Labor unions have long held that faster line speeds are unsafe for workers, and new data backs them up: after pork processors got the greenlight to run lines faster, workers are seeing increases in cuts, sprains and other injuries.

Once COVID-19 hit, jobs across the food system became even less safe. Farmworkers often work closely together in fields and live in temporary housing where social distancing isn't possible, a situation made even riskier by the fact that employers don't consistently provide personal protective equipment or adhere to other rules. The situation in meatpacking plants is even worse: the cold indoor environment, combined with faster line speeds that make distancing impossible to follow are a perfect spreading ground for the virus. Early in the pandemic, the meatpacking industry used dubious claims of impending food shortages to lobby the government for permission to stay open with minimal oversight.

Some of these issues are being addressed through executive action: Biden issued an order in January instructing OSHA to be more aggressive in its implementation of COVID-19 safety guidelines, and the administration scraped a USDA rule change that would allow poultry plants to process as many as 175 birds per minute. It's a welcome move for workers across the food system: as the FCWA's report details, OSHA issued only 295 citations for COVID-19 related violations issued in 2020, and only 10 for food companies. The total penalties for these violations amounted to just over $95,000 — a meager amount for these multi-million dollar companies. More enforcement from OSHA — especially much stiffer penalties for failures — would go a long way towards providing workers with a safer environment.

There's still more room for improvement, however. Trump's executive order for meatpacking plants to remain open is still in effect. While OSHA officials have insisted this won't prevent plant closures, they don't have the authority to revoke the order themselves. Activists, concerned it could still allow for plants to operate without proper COVID-19 protections, say that Biden should withdraw the order. Doing so would allow state and local health departments to do more to stop outbreaks themselves, regardless of OSHA action.

Many companies, including Trader Joe's, Whole Foods and Walmart, awarded benefits to help compensate for hazardous working conditions in the early months of the pandemic. But most employers dropped the programs within a few months. While food companies justified these rollbacks as cost-saving measures that would prevent consumers from seeing high prices, there's little evidence the programs caused a financial burden. In fact, analysis from the Brookings Institution shows that despite record profits during the pandemic, food and grocery companies were the least generous when it came to pandemic pay increases. Per their analysis, companies like Walmart could have quadrupled the amount of hazard pay they offered and still maintained profit growth from 2019.

Public support for hazard pay remains high, however. Measures that would grant hazard pay to farmworkers also have popular support in areas with a large agricultural industry, with more than 70% of respondents to one California poll stating their support for hazard pay and sick leave for farmworkers. In some instances, labor unions have successfully leveraged their essential status to extend or increase hazard pay; produce handlers of Hunts Point Produce Market in New York, one of the country's largest food distribution facilities, secured a raise after successfully focusing media attention on their strike. The workers were supported by a number of politicians and celebrities, who helped draw national attention to the fact that people who had been labeled "heroes" only months before were now struggling to make ends meet. FCWA's report highlights many similar campaigns, many of which are still struggling to gain similar traction and support from the public.

Labor organizers have some support from the Biden administration, who have stated their support for "generous back hazard pay" for grocery workers during the pandemic. How they plan to accomplish this is less clear: their plan only specifies that they would pressure CEOs to take action. The city of San Francisco passed a non-binding ordinancance to the same effect. This kind of public encouragement to do the right thing can help  — it was certainly instrumental to many companies granting hazard pay in the early months of the pandemic — but as the quiet withdrawal of those benefits only months later shows, it isn't a legal commitment.

But while encouragement lacks teeth, legal mandates can face serious resistance: after Long Beach, California passed legislation that secured a $4 hourly raise for grocery workers, for example, Kroger closed two of its locations there. Considering the grocery chain's enormous size, the action seems to be less about their profits in those stores and more about preventing other cities from adopting similar measures. The United Commercial and Food Workers International Union vowed to fight the action, stating that "Kroger does not have the right to ignore laws designed to protect workers and the public."

Activists have also noted concern about offers that would supplant hazard pay with less substantive compensation. In Kroger's case, employees can receive a $100 stipend for getting vaccinated. Many other chains are offering even less. Between the fact that these rewards cover only a few hours worth of hazard pay and the reality that many food workers can't even get the vaccine yet, these one-and-done approaches feel more like out-of-touch PR opportunities than substantive help for workers.

While hazard pay to compensate these workers during the pandemic is vital, the work activists were doing pre-pandemic to secure basic labor rights like health insurance coverage, paid sick leave and workers compensation is also of utmost importance. These kinds of protections will have resonance for food workers beyond the pandemic. "I feel very strongly that we need more than just the gains we might earn under what basically feels like plague time," Lux, a Minneapolis-based Caribou Coffee worker, is quoted in the FCWA report. "Caribou workers deserve to have family leave…we deserve to have higher pay. We deserve to have sick and safe time across the board. There are so many things that we as workers have realized that we deserve and we're not getting . . ."

Ultimately, hazard pay and other pandemic demands are a way to show workers in the food system that their efforts are appreciated in a pandemic, but it's important to remember these are small steps towards making workplaces more equitable and protecting food and farmworkers all the time — the bare minimum for workers who have always been essential.