The party of no? Not as much as you might think: GOP is mostly OK with Biden's picks

Beyond the Sedition Caucus — Cruz, Hawley, Cotton, et al. — Senate Republicans may be hedging bets on the future 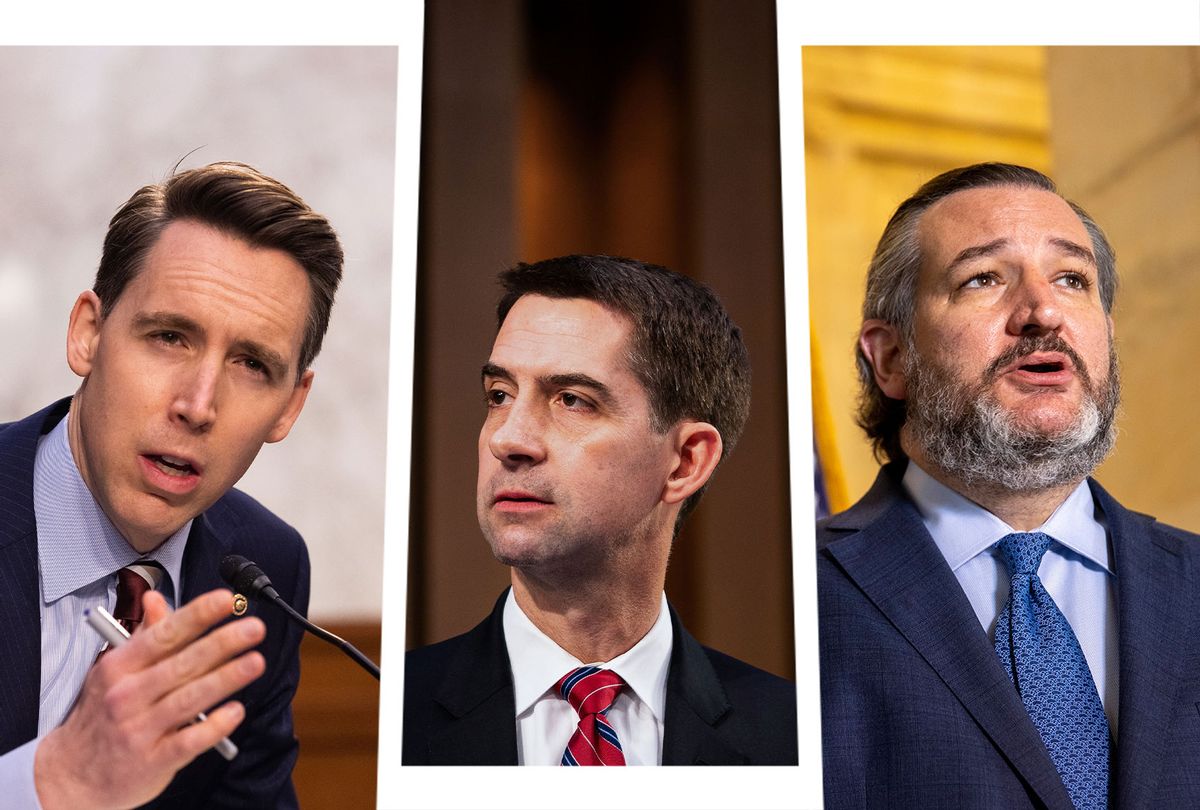 Josh Hawley, Ted Cruz, Rick Scott, Tom Cotton and Tommy Tuberville have something in common — beyond the fact that they're all white male Republican senators eager to profess their love and loyalty to former President Donald Trump: They really hate President Biden's Cabinet nominees.

That quintet has, so far, overwhelmingly rejected Biden's 16 nominees for Cabinet or Cabinet-like positions, and have cast the most "no" votes of any senators. Hawley has supported just one nominee. Scott and Cruz have backed two, Cotton has voted to confirm three and Tuberville has supported a whopping four of them.

On the other side of the GOP spectrum — both in terms of ideology and fondness for Trump — are another group of Republican senators: Susan Collins of Maine, Mitt Romney of Utah, Lisa Murkowski of Alaska and Rob Portman of Ohio.

That quartet all voted to convict Trump in his second impeachment trial, and they've also been the most supportive of Biden's nominees among their GOP colleagues. Each has backed all 16 of Biden's picks (minus White House budget nominee Neera Tanden, who withdrew from consideration facing stiff bipartisan opposition).

The trends among the two cohorts offers yet another stark illustration of the difference in opinion over how the GOP plans to operate under Biden and highlights the diverging strategies at play: Shut Biden down to whatever extent possible, or hedge bets on the Republican future. Even party leaders like Senate Minority Mitch McConnell, R-Ky., and Chuck Grassley, R-Iowa, have backed most of Biden's picks.

It's certainly not abnormal, particularly in recent decades, for Cabinet nominations to be polarizing. But so far, and contrary to what many observers might assume, Republicans are on pace to back more of Biden's nominees than Democrats did with Trump's initial round of picks.

On average, Republicans have each supported roughly 9 out of 16 Biden nominees, or about 56 percent. Democrats voted, on average, for 9 out of 22 Trump nominees, or a little more than 40 percent. Biden still has several posts left to fill, including a new nominee to replace Tanden. But thus far, he's on pace to choose more contenders that opposition-party senators can stomach than Trump ever managed.

To be sure, the former president's nominees were more controversial and faced troubling conflicts of interests and ethical dilemmas prior to even assuming their roles.

For example, Scott Pruitt, who headed the Environmental Protection Agency until he was forced out by a rising tide of scandal, wanted to eliminate the department before being tapped to run it and was a known climate-change denialist. Education Secretary Betsy DeVos had no background or experience with public schools, and could fairly be described as hostile to them in general. Secretary of State Rex Tillerson, a former big oil CEO, had controversial foreign ties. (Although he will long be remembered for reportedly describing Trump as a "moron.")

It's true that several Biden picks have faced questionable pasts of their own, such as hailing from WestExec Advisors, a Washington consulting firm co-founded by Secretary of State Antony Blinken.

But relatively broad Republican support for Biden's nominees has been notable for several reasons. Not only does it signal that his picks are more palatable to conservatives, it also reflects the altered climate on Capitol Hill in the wake of Trump's second impeachment trial and an attempted insurrection. Trump remains a powerful figure within the GOP, but many elected Republicans, at least in the upper chamber, appear willing to work beyond Trump and gradually wriggle away from his grip on the party.

It's not outside the norm for senators with presidential ambitions to boycott a president's nominees from the opposite party, which offers another potential explanation for the near-blanket opposition from folks like Cruz, Hawley and Cotton, who are considered likely 2024 contenders.

One Democratic senator with aspirations to higher office, for example, was among the top opponents of Trump's Cabinet and Cabinet-level choices. Out of the 22 first-round nominees, she voted to confirm just four. That senator was Kamala Harris, who as vice president of the United States now presides over the Senate and can be counted on to break 50-50 ties in the Democrats' favor.