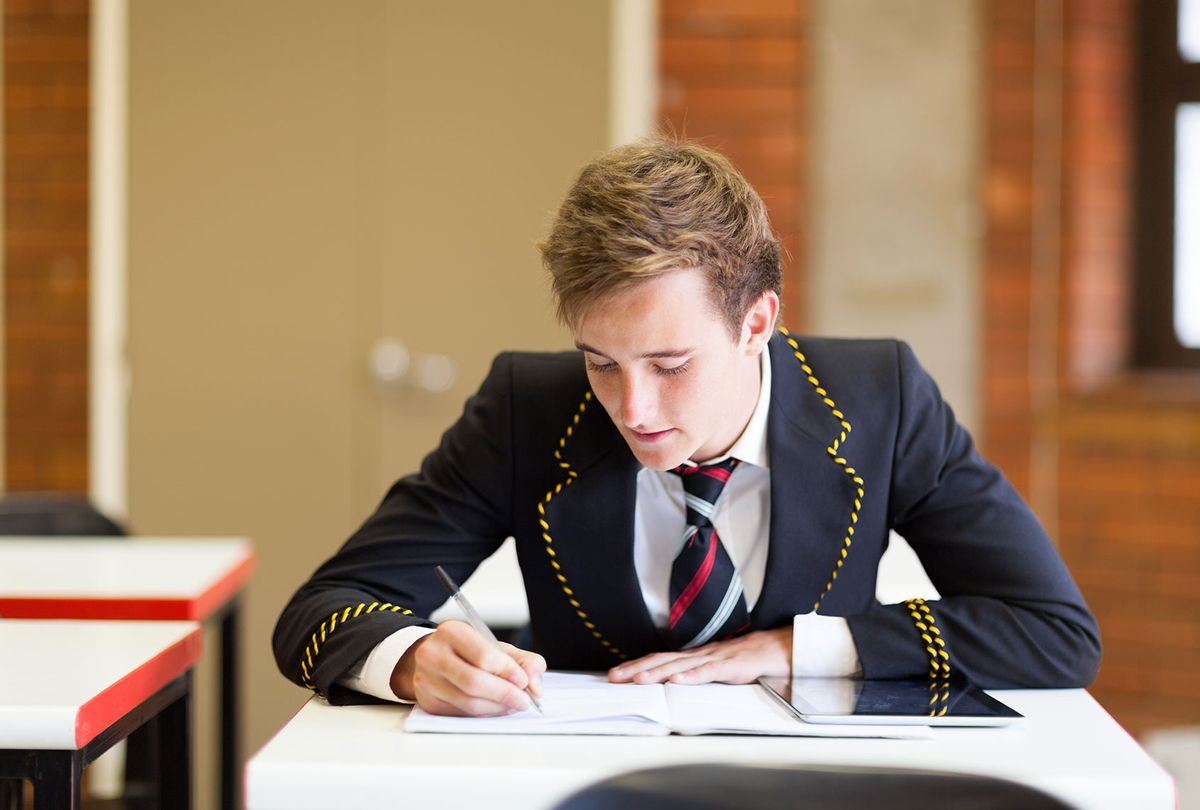 "She's more crazy than she is female."

So declared a senior student in a furious critique of Sylvia Plath's poetry. The classroom was entirely male, myself included. As the teacher, I mediated discussion but had come to expect opposition to conversations about gender in the all-boys' Sydney private school.

My research into the presumptive biases of single-sex education has affirmed a culture of resistance to talking about gender in all-male schools. Comments like this one can't be dismissed or excused as teenage bravado. They're part of an enduring ethos that continues to protect male privilege in the private school system.

Single-sex schools across Sydney are reckoning with sexual violence disclosures in response to a heartbreaking petition from more than 3,000 women. Hundreds have shared their testimony in a document created by a former Kambala schoolgirl Chanel Contos demanding better education on sexual consent.

Contos also calls for a change to the pervasive misogyny of single-sex male schools. And here, we need to recognize the biases that infuse all aspects of school life, including classroom teaching.

https://twitter.com/RNBreakfast/status/1365039842581569539
My research has found the learning differences assumed by teachers and school leaders in gender-segregated schools impact both programming and practice. In an all-male context, this can marginalize women and galvanize destructive gender stereotypes.
Male schools favor male texts

Neuroscientific research has shown any disparities between male and female ways of thinking are irrelevant to the psychology of learning. In spite of this, studies demonstrate how assumptions about gender guide the type of content selected for study.A report from the University of Melbourne recognizes the enduring misconception among teachers and school leaders that

male – rather than female – authors and creators are more equipped to write about and imagine major social, political and cultural issues.

For the English classroom, where my work is focused, the most visible indicator of this belief is the choice of texts to study. In a single-sex male context there is a tendency to favor fiction deemed appropriately masculine, and literature written by male authors. The result is that gender becomes both invisible and irrelevant to classroom criticism.

This is contrasted in co-educational and single-sex female school settings, where text choice is less likely to be guided by "the inevitable privileges of being a boy." In these contexts gender remains visible and valuable to classroom discussion, but does not directly inform content selection or curriculum programming.

In 2015 and 2016 I surveyed more than 130 English teachers and curriculum leaders across public and independent schools. I wanted to investigate whether teaching practices beyond content selection were influenced by gender assumptions in all-male environments.

The interviews were striking in their expectations of gender and student success. There was a near unanimous assumption by teachers I spoke to across all school systems that male students should be steered away from overtly gendered literary experiences.

The teachers I spoke to believed male students were more likely to be successful in assessments if they avoided analyses of gender, including their own. While there is no quantifiable data to support this claim, it is almost impossible to measure student achievement separate from the acknowledged biases of practice.

Many teachers speculated that students in all-male schools seldom had cause to recognize or reflect on gender entitlement. As such, they were likely to be limited in their capacity for literary discussion on this aspect of identity.

The issue might suggest a simple solution. By including more literature by female authors and about female experiences, we could seemingly break the silence of gender in male single-sex schools. Unfortunately, the problem is more profound.

The teachers I interviewed from all-male schools spoke about gender being sidelined, even in female-focused texts. They noted in these lessons, discussion shifted to favor other textual concerns, or to prioritize a male perspective of the central female experience.

These observations again differ from research in all-girls schools and in co-educational schools. Here all students appear to benefit from the presence of female students and the lived female experience to which they are able to give voice.

My research has affirmed these outcomes in Australian classroom practice. As a case study, the HSC English Advanced syllabus prescribes a comparative analysis of Sylvia Plath's "Ariel" and Ted Hughes's "Birthday Letters." Responses I collected from all-male schools showed they were inclined to marginalize Plath's womanhood, and favor Hughes's account of their violent marriage.

In contrast, responses from all-female and co-educational schools more often presented extensive discussion of Plath's feminist identity, even when those responses were composed by male students.

More disturbingly, several female teachers I interviewed said they felt intimidated when asked to discuss constructions of gender in all-male school environments. They said a small but vocal portion of older adolescents would become aggressively oppositional, and assert such content was only included as "tokenism" towards a "feminist agenda."

One senior English teacher based in Sydney's east recalled a close study of Ophelia's suicide in "Hamlet." The discussion centered on the possibility Ophelia's death was the ultimate act of passivity. As a woman, the responsibly that burdens Ophelia is too great, and suicide is her only escape. In the all-male class, a student argued he would only write about the sexual connotations of this reading if the teacher could promise his essay would be marked by a male member of staff.

These accounts are troubling. Dangerous learning assumptions indicate the need for reform across curriculum programming and teaching practice. But their innate influence also hints at a clear path for improvement.

The need for our private school system to denounce the most conspicuous elements of misogyny is urgent, but we must also contend with the quietly profound role classroom learning plays in affirming or challenging an institutional culture of oppression.