MAGA, the Proud Boys and the police: Biden's DOJ must drain Trump's swamp 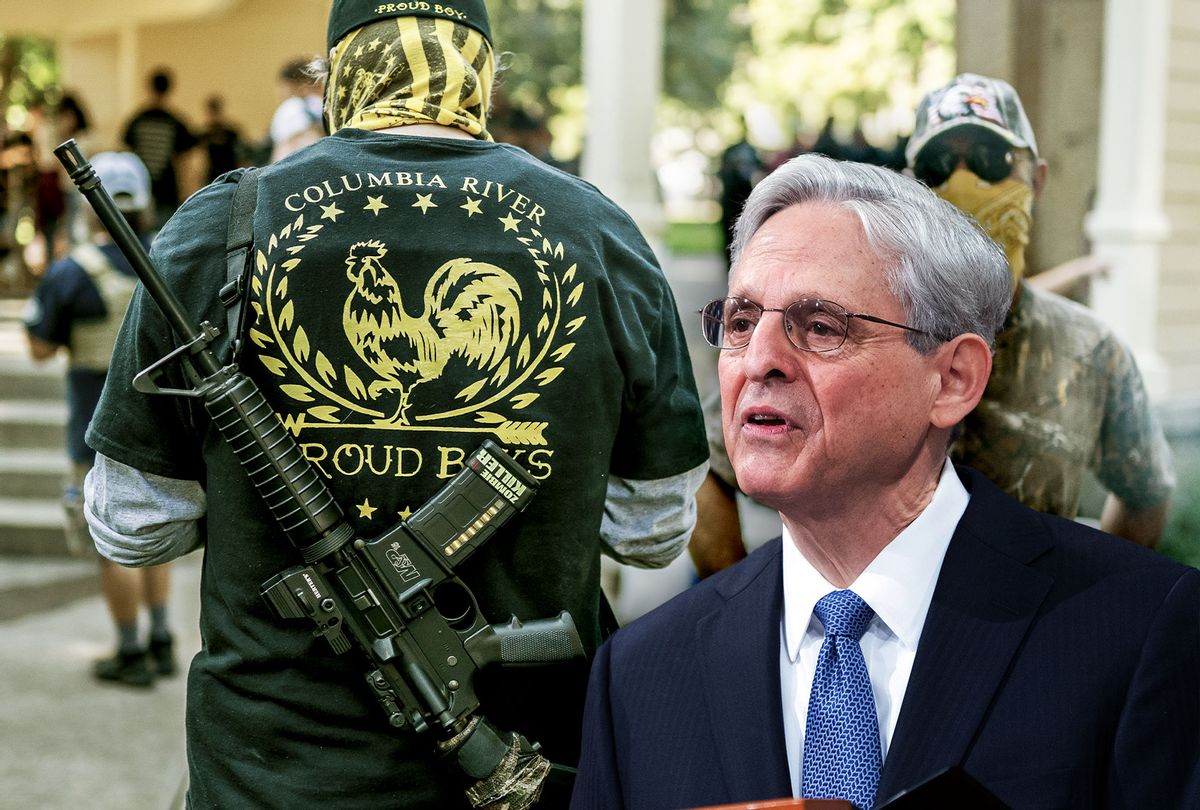 Back in July of 2016, not long after he had clinched the nomination, Donald Trump made an important declaration. "We must maintain law and order at the highest level or we will cease to have a country, 100 percent. We will cease to have a country. I am the law and order candidate." Lest you think he was advertising himself as a hardcore authoritarian, he set us straight by adding, "not only am I the law and order candidate, but I am also the candidate of compassion, believe it. The candidate of compassion." That was very reassuring.

As I have discussed here many times, Trump has never had an original idea when about politics so that catchphrase, "law and order," like all of his, came from a previous president: Richard Nixon used it in his 1968 campaign. Trump probably had no idea that it had that association but he would have been fine with it in any case. Nixon's "law and order" theme was a thinly veiled appeal to white, conservative voters angry about the Vietnam protest movement, the social unrest in the inner cities and the counterculture that was challenging all the existing mores of bourgeois American life.

Trump was also planning to "clean up the streets," particularly focusing on undocumented immigrants and cities with large Black populations. But he was doing something else, as well. He was openly courting the support of law enforcement as a political constituency.

While politicians often make appeals to order and express support for law enforcement, Trump's level of blatant pandering was unusual. And it wasn't really necessary. Police unions have been increasingly supporting Republicans over the past few decades and would have been expected to endorse Trump in any case. But Trump made it clear that he thought of law enforcement as part of his MAGA movement from the very beginning — and many of them were eager to join.

The National Organization of Black Law Enforcement Executives, for instance, and plenty of individual Black police officers didn't feel the call, for obvious reasons. And some police departments strongly discouraged partisan activity, such as the wearing of red Trump hats while in uniform. But there was little question that members of law enforcement, from local precincts to the Border Patrol and ICE to some members of the FBI, were MAGA enthusiasts.

Trump had always been very pro-cop, and in particular, very pro-police violence. You will recall that one of his earliest forays into politics was the buying of the infamous full-page ad back in the 1980s entitled "Bring Back the Death Penalty, Bring Back Our Police!" He made it clear that he believed they should be allowed to take off the gloves and deliver street justice at their discretion.

What has happened to law and order, to the neighborhood cop we all trusted to safeguard our homes and families, the cop who had the power under the law to help us in times of danger, keep us safe from those who would prey on innocent lives to fulfill some distorted inner need... Let our politicians give back our police department's power to keep us safe. Unshackle them from the constant chant of "police brutality" which every petty criminal hurls immediately at an officer who has just risked his or her life to save another's...

He kept it up as president. In 2017, Trump even gave a speech to cheering cops in uniform and told them "please, don't be too nice," suggesting that when they put suspects in the back of their cruisers, they crack the heads of the handcuffed arrestee on the roof of the car.

Trump's always had an affinity for vigilante justice as well, as long as the vigilante targeted people Trump believed needed to be dealt with harshly. During the 2016 campaign, he used to reminisce fondly about the movie "Death Wish" a 1970s revenge movie. By the summer of 2020, during the George Floyd protests, he was encouraging vigilantes. He tweeted, "when the looting starts, the shooting starts" and defended a 17-year-old armed, "Blue Lives Matter" counter-protester, Kyle Rittenhouse, who shot dead two protesters and seriously wounded another in Kenosha, Wisconsin. At that same protest, police told armed militia members "we appreciate you guys, we really do."

They were all MAGA now, Trump, the militia and cops alike. This explains why, as the New York Times reported on Sunday, some of the president's biggest fans — the violent, far-right, neo-fascist, Proud Boys — have been repeatedly protected by the police all over the country in altercations with protesters for years.

The thugs would violently assault protesters and instead of being arrested, the cops would arrest their victims and let the Proud Boys go. According to the Times, federal law enforcement was aware of them but saw them as "street brawlers" who didn't have a political ideology or present an organized threat. For non-ideological street brawlers, however, they seemed to enjoy "hyper-nationalist chants about immigration, Islam and Mr. Trump" and had a strange affinity for violent right-wing Chilean dictator, Augusto Pinochet.

The Times interviewed one Proud Boys member who is a police officer himself and Fresno police in California just suspended an officer who was featured in protest footage posted by a Proud Boys member who filmed himself raiding the Capitol. The founder of the group, Gavin McInness, is quoted saying, "I have a lot of support in the N.Y.P.D. and I very much appreciate that." Cops in Philadelphia were observed hanging out with Proud Boys after a Mike Pence rally last year. In fact, according to their leader, Enrico Terrio, the FBI would contact them and warn them of "leftist" threats against law enforcement. Trump confidante Roger Stone has been using the Proud Boys as "bodyguards" for several years and is credited with bringing some of the leadership together. As journalist Marcy Wheeler has reported, when he stepped in to help Stone evade justice, former Attorney General Bill Barr dismissed concerns about Stone's involvement with the Proud Boys and threats they made against a federal judge, behavior that would undoubtedly have been taken very seriously if they weren't MAGA.

With Trump gone, President Biden's Department of Justice, led by Merrick Garland, is finally taking these people seriously now. After all, they turned on the police themselves. You have to wonder what the rank and file police are thinking these days. Donald Trump unleashed a violent mob on the Capitol and they assaulted police at every turn. The great defender of law and order took hours to say anything and when he did all he had to offer was a weak little tweet that said "Please support our Capitol Police and Law Enforcement. They are truly on the side of our Country. Stay peaceful!" The "law and order" president later released a video telling the thugs who were beating cops over the head with flagpoles that they should go home. And then he told those violent rioters he loved them and believed they were "very special."

When push literally came to shove, there was no doubt which side the "law and order" president was really on — and it wasn't on the side of the police.