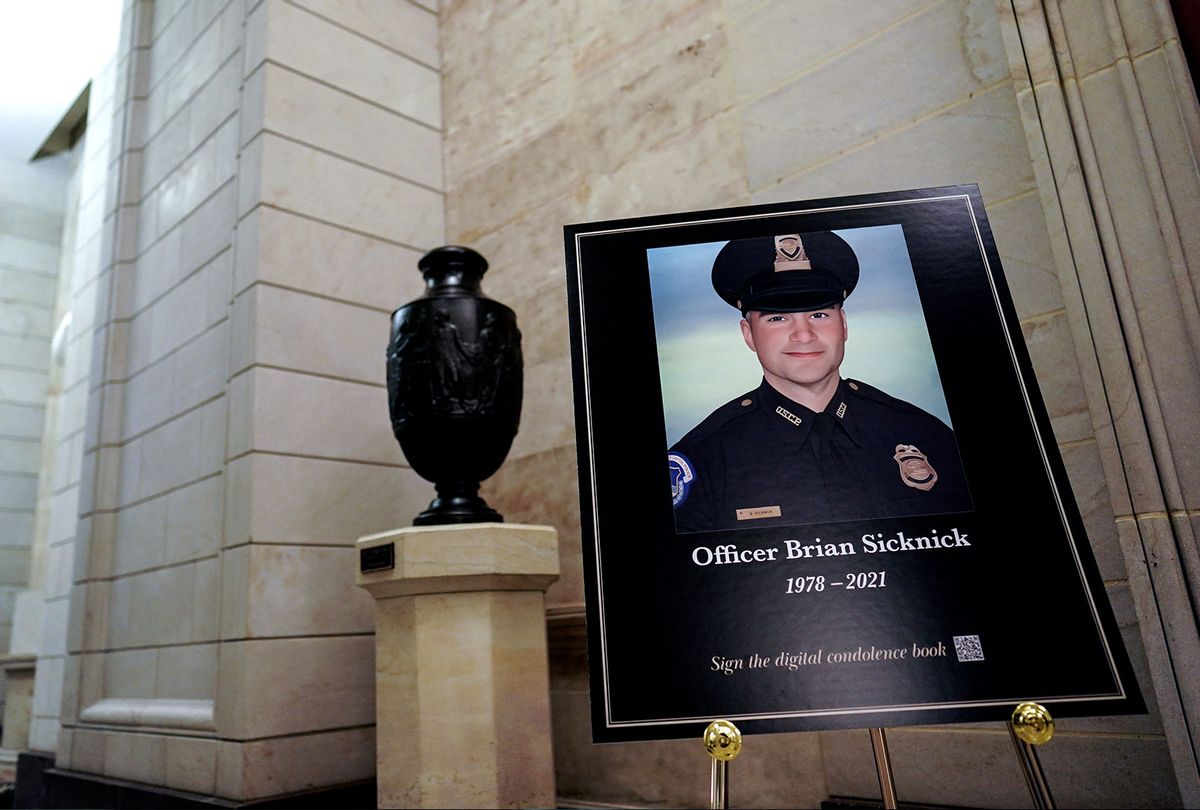 A sign just outside the Rotunda memorializes U.S. Capitol Police Officer Brian D. Sicknick, 42, who will lie in honor in the Rotunda of the Capitol beginning on Tuesday evening, February 2, 2021. Officer Sicknick was responding to the riot at the U.S. Capitol on Wednesday, January 6, 2021, when he was fatally injured while physically engaging with the mob. Members of Congress will pay tribute to the officer on Wednesday morning before his burial at Arlington National Cemetery. (Salwan Georges/The Washington Post via Getty Images)
--

Two men had been arrested and charged with assaulting former Capitol police officer Brian Sicknick during the Jan. 6 Capitol riot.

Federal authorities are still investigating the death of Sicknick, who sustained injuries while defending the Capitol building from pro-Trump rioters. Investigators have confirmed that Sicknick did not die of blunt force trauma. And while it remains unclear what exactly lead to Sicknick's death, a video from Jan. 6 show him being attacked and sprayed with unknown agent. A toxicology report has not been publicized.

Sicknick's death was originally reported on Jan. 8 –– two days after the riot –– in The New York Times, which alleged that Sicknick was slain as a result of blunt force trauma sustained from a fire extinguisher with which a protester used to attack him.

"On Wednesday," The Times initially reported, "pro-Trump supporters attacked that citadel of democracy [i.e., the Capitol], overpowered Mr. Sicknick, 42, and struck him in the head with a fire extinguisher, according to two law enforcement officials. With a bloody gash in his head, Mr. Sicknick was rushed to the hospital and placed on life support. He died on Thursday evening."

Many other news outlets disseminated these very same details. The New York Post released a video on Jan. 11 showing a rioter throwing a fire extinguisher at an unidentified Capitol police officer, who was struck on the head by the extinguisher.

But it was never confirmed that Sicknick was the officer shown in the video. In a statement on Jan. 7, the Capitol police said that Sicknick was "injured while physically engaging with protesters." However, according to the statement, Sicknick returned to his office, where he collapsed, was brought to the hospital, and was later declared dead. The statement did not say that he was not rushed to hospital immediately after the riot (per the New York Times report).

On Feb. 16, just five weeks after The Times' story broke, The Times revised its original story to reflect that its sources may have been unreliable. "Law enforcement officials initially said Mr. Sicknick was struck with a fire extinguisher," it reported, "but weeks later, police sources and investigators were at odds over whether he was hit. Medical experts have said he did not die of blunt force trauma, according to one law enforcement official."

Right-leaning outlets such as Fox, TheBlaze, and The National Review quickly feasted upon the correction, likely in service of a narrative that the Capitol riot was less violent than characterized by the rest of the mainstream media. National Review contributor Andrew McCarthy expressed concern over the inclusion of Sicnick's death in Donald Trump's second impeachment trial.

"If [Sicknick's death] did not happen the way the House Democratic impeachment manners have represented that it happened," McCarthy argued, "we should be told that — and be told why such an inflammatory allegation was made in the impeachment article and repeated in the pretrial memo."

Fox News' Tucker Carlson also decried what he thought was a weaponization of Sicknick's death by Democrats.

"[The New York Times report] forms the basis of the myth that Democrats have constructed around Jan. 6.," he said. "Sicknick's remains lay in honor at the Capitol building. Streams of politicians, who just months before had told us that cops were racist by definition, praised Brian Sicknick as a hero. They had finally found a police officer who served their political uses."

Sicknick's mother believes that her son died of a fatal stroke. Investigators are now exploring the possibility that the stroke was triggered as a result of a chemical irritant, such a bear spray.

In an interview with Propublica shortly following the attack, Sicknick's brother made clear what he felt happened. "[Brian] texted me last night and said, 'I got pepper-sprayed twice,' and he was in good shape," adding, "Apparently he collapsed in the Capitol and they resuscitated him using CPR."

"This political climate got my brother killed."