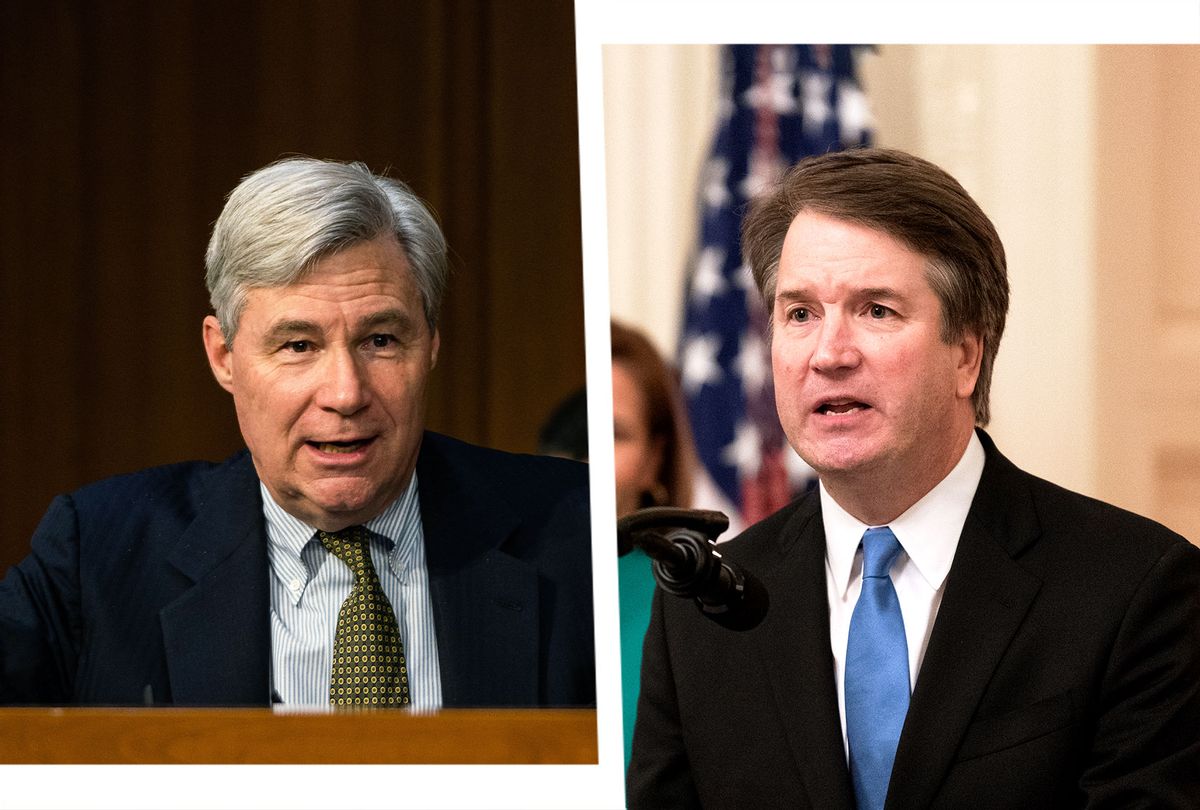 One Democrat in Congress is calling on the Department of Justice to perform an investigation into allegations that the FBI conducted a "fake" criminal background check of Supreme Court Justice Brett Kavanaugh as he was faced accusations of sexual assault during his confirmation hearing in 2018.

In a letter sent on Mar. 11 to the newly-confirmed attorney general, Merrick Garland, Sen. Sheldon Whitehouse, D-R.I., cast doubt on the thoroughness of the FBI's investigation and requested that Garland facilitate "proper oversight" to revisit the probe.

During Kavanaugh's confirmation in 2018, Christine Blasey Ford testified that the justice had sexually assaulted her back in high school, decades ago, when he had corralled her into a bedroom while they were both inebriated. At the time, Kavanaugh vehemently denied any allegations of misconduct. Four people close to Ford submitted sworn affidavits corroborating Ford's account, but Kavanaugh would later be confirmed in spite of the case built against him.

In his letter, first reported on by the Guardian, Whitehouse, a Rhode Island Democrat and former prosecutor who serves on the Senate's Judiciary Committee, alleges that many witnesses in the case were not given the opportunity to detail their account to the FBI, since no one at the bureau was ever assigned to them.

"This was unique behavior in my experience, as the Bureau is usually amenable to information and evidence," he wrote, "but in this matter the shutters were closed, the drawbridge drawn up, and there was no point of entry by which members of the public or Congress could provide information to the FBI."

The FBI ultimately opened a "tip line" for anonymous testimony, but senators were given "restricted access" to the evidence and "received no explanation of how, or whether, those allegations were processed and evaluated."

It was a far cry from past practices regarding tip lines. "In 2011," Whitehouse wrote, "the FBI had posted a video,'"Inside the FBI's Internet Tip Line,' in which the Bureau described procedures for review of tip line information in criminal investigations, for sorting out investigative wheat from the chaff such tip lines customarily produce, and for forwarding credible information appropriately within the Bureau for further investigation."

The tip line in Kavanaugh's case, he concluded, "appears to have operated more like a garbage chute, with everything that came down the chute consigned without review to the figurative dumpster."

Whitehouse also criticized former FBI director Christopher Wray for his lack of oversight on the matter. According to the letter, Wray had testified to the Senate Judiciary Committee in July of last year that the "investigation was 'consistent with our long-standing policies, practices, and procedures for background investigations." However, Director Wray "has refused to answer Congressional inquiries about whether that was actually the case."

"If standard procedures were violated," wrote Whitehouse, "and the Bureau conducted a fake investigation rather than a sincere, thorough and professional one, that in my view merits congressional oversight to understand how, why, and at whose behest and with whose knowledge or connivance, this was done."