Police: 21-year-old Robert Aaron Long was turned in by his family after a shooting spree at three Atlanta-area spas 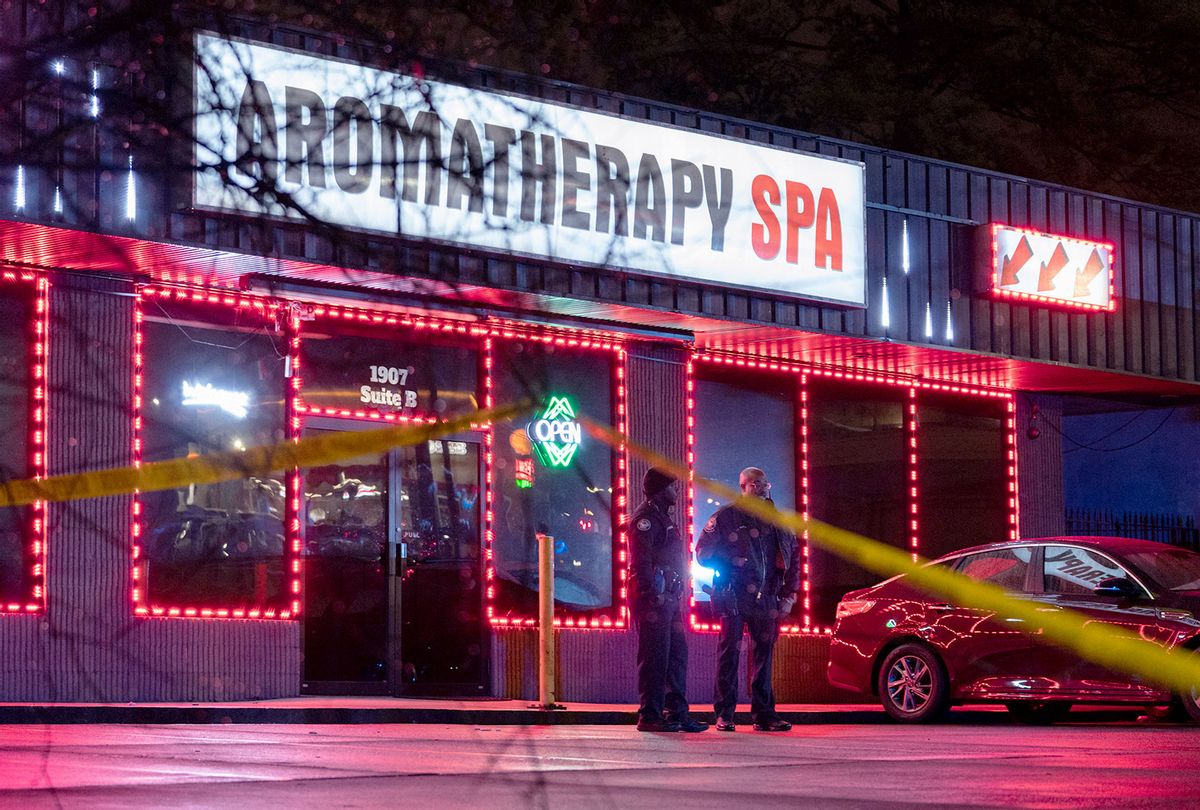 Law enforcement personnel are seen outside a massage parlor where a person was shot and killed on March 16, 2021, in Atlanta, Georgia. - Eight people were killed in shootings at three different spas in the US state of Georgia on March 16 and a 21-year-old male suspect was in custody, police and local media reported, though it was unclear if the attacks were related. (ELIJAH NOUVELAGE/AFP via Getty Images)
--

A gunman who killed eight people, most of them Asian women, in a shooting spree at three Atlanta-area massage parlors on Tuesday evening told police that he was not racially motivated.

Cherokee County Sheriff Frank Reynolds suggested during a Wednesday news conference that 21-year-old Robert Aaron Long, who was turned in by his family following a brief manhunt, "frequented these places in the past and may have been lashing out."

According to officials, the attacks began around 5 pm, when the shooter killed four people at one spa near Acworth, just north of Atlanta, Young's Asian Massage. Cherokee County deputies were called onto the scene, where two people were pronounced dead and three were rushed to the hospital, where two of them later died. One man was reported injured. About an hour later, Atlanta police responded to reports of a robbery at Gold Spa in northeast Atlanta, where officers later found three women who had been shot dead. Officers then found the body of a woman who worked at Aromatherapy Spa, another spa just across the street.

Atlanta police said on Tuesday night that they suspect the shootings are related, but an investigator currently working to confirm the relation. South Korea's foreign ministry told NBC News that four of the women were of South Korean descent, but their identites have not been confirmed.

Atlanta police chief Rodney Bryant said that authorities have not yet attributed a motive to the shootings. "We are in the very early stages of this," he noted. But Long, who was arrested in connection to the killings and lives in an unincorporated area of Cherokee County, indicated that the spas were "a temptation" for him.

"It's a temptation for him that he wanted to eliminate," Sheriff's Capt. Jay Baker told reporters. "It's still early on, but those were comments that he made."

"Our entire family is praying for the victims of these horrific acts of violence," Georgia Gov. Brian Kemp tweeted.

Rep. Judy Chu, D-Calif., wrote on Wednesday that she was devastated to hear about the shootings. The Asian American community, she said, "has been facing a relentless increase in attacks and harassment over the past year."

According to Stop AAPI Hate, 3,800 incidents of anti-Asian attacks have been reported nationally since last March, many of them targeted specifically at Asian women.