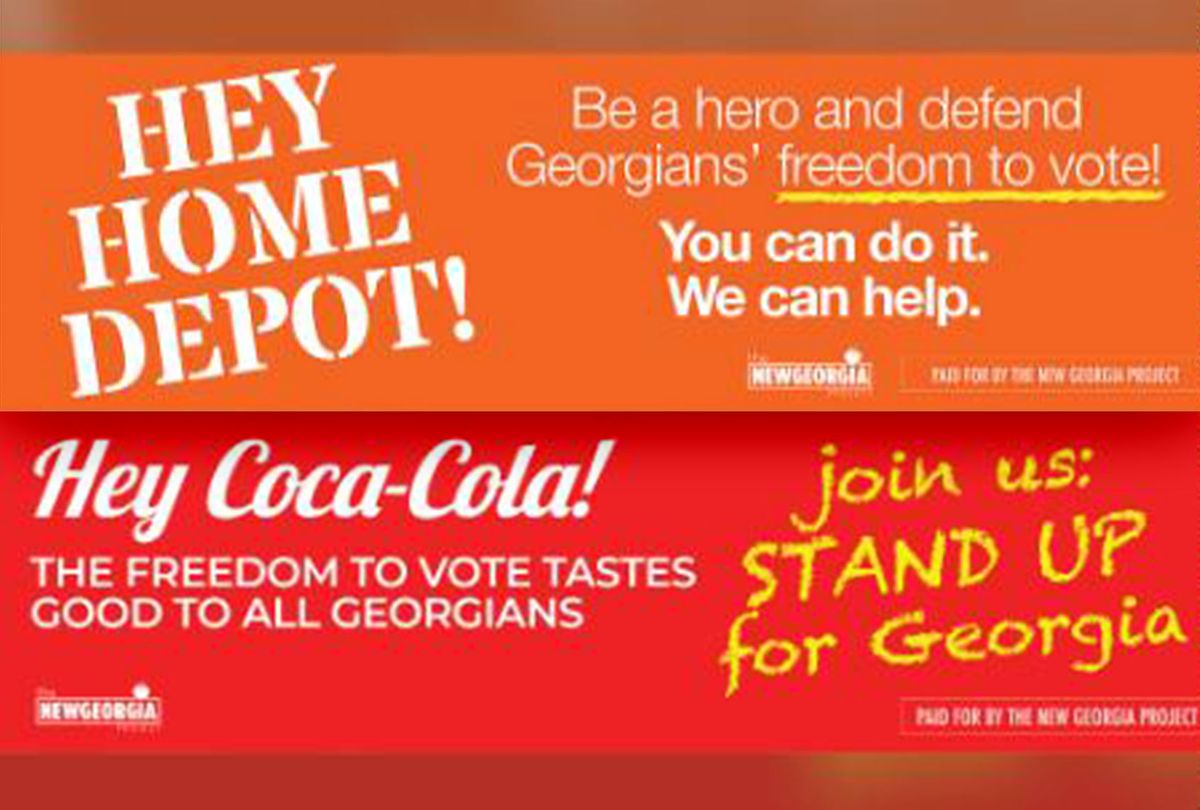 Home Depot and Coca-Cola, two major corporations based in Georgia, publicly voiced their opposition toward the Republican-backed effort to restrict voting in the Peach State after Democrats flipped it blue.

Republicans began pushing for heightened voting restrictions in Georgia shortly following the election of two Democrats to the Senate in a special runoff election in January, and civil liberties groups in the state –– such as Black Voters Matter, the New Georgia Project Action Fund, and the Georgia NAACP –– have been putting intense pressure on business executives and corporations like Home Depot, Coca-Cola, Aflac, Delta Air Lines, and UPS to oppose the democratic backslide.

On Friday, in a big win for activists organizing against the attack on Georgia's electoral system, the Georgia Chamber of Commerce issued a statement expressing that it "supports accessible and secure voting while upholding election integrity and transparency."

"Simply put," the Chamber said, "we believe that it should be easy to vote, hard to commit fraud, and that Georgians should have faith and confidence in secure, accessible, and fair elections."

According to the Washington Post, representatives from Home Depot and Coca-Cola expressed that the two mega-corps were "aligned" with the Chamber's statement.

Other companies have issued more cautious statements that back election integrity and security more broadly, but do not expressly oppose the current voting restrictions on the table. "Ensuring an election system that promotes broad voter participation, equal access to the polls, and fair, secure elections processes are critical to voter confidence and creates an environment that ensures everyone's vote is counted," read Delta's statement CNBC.

"We need to join together to ensure accessible and secure voting while preserving election integrity and transparency," Aflac echoed. "As this important issue is debated in Georgia and statehouses across the nation, we expect that fairness and integrity will be the ongoing basis for discussion."

The two bills at front and center –– HB 531 and SB 24 –– would enact highly consequential changes to Georgia's election system by limiting early voting on Sundays, halting no-excuse mail-in voting, limiting drop box access, and restricting early voting hours. Activists say that these measures would predominantly affect black voters in Georgia, who make up 30 percent of the state's electorate and largely led the state's flip to blue in 2020.

On Sunday, Stacey Abrams, a longtime voting rights activist, called the restrictions "a redux of Jim Crow in a suit and tie."

"We know that the only thing that precipitated these changes, it's not that there was the question of security," she said Sunday on CNN, referring to false Republican claims of electoral fraud. "And so the only connection that we can find is that more people of color voted, and it changed the outcome of elections in a direction that Republicans do not like."

Some advocacy groups have launched ad campaigns in Georgia to raise awareness of the current conflict. For example, the Black Votes Matter fund took out a full-page ad in the Atlanta Journal-Constitution, expressing the "responsibility and opportunity" the business community has to protect the state's democracy. Other organizations such as The Service Employees International Union and Progress Georgia have emphasized the spending power of black voters in the state through digital ads.

"Georgia is backsliding toward a twisted electoral system built on suppressing and manipulating Black votes," Black Voters Matter founders LaTosha Brown and Cliff Albright told The Washington Post. "This is not only blatant voter suppression; it's an act of retribution against Black voting power."