Tony Blinken goes to Asia — but is his confrontational China policy going in the wrong direction? 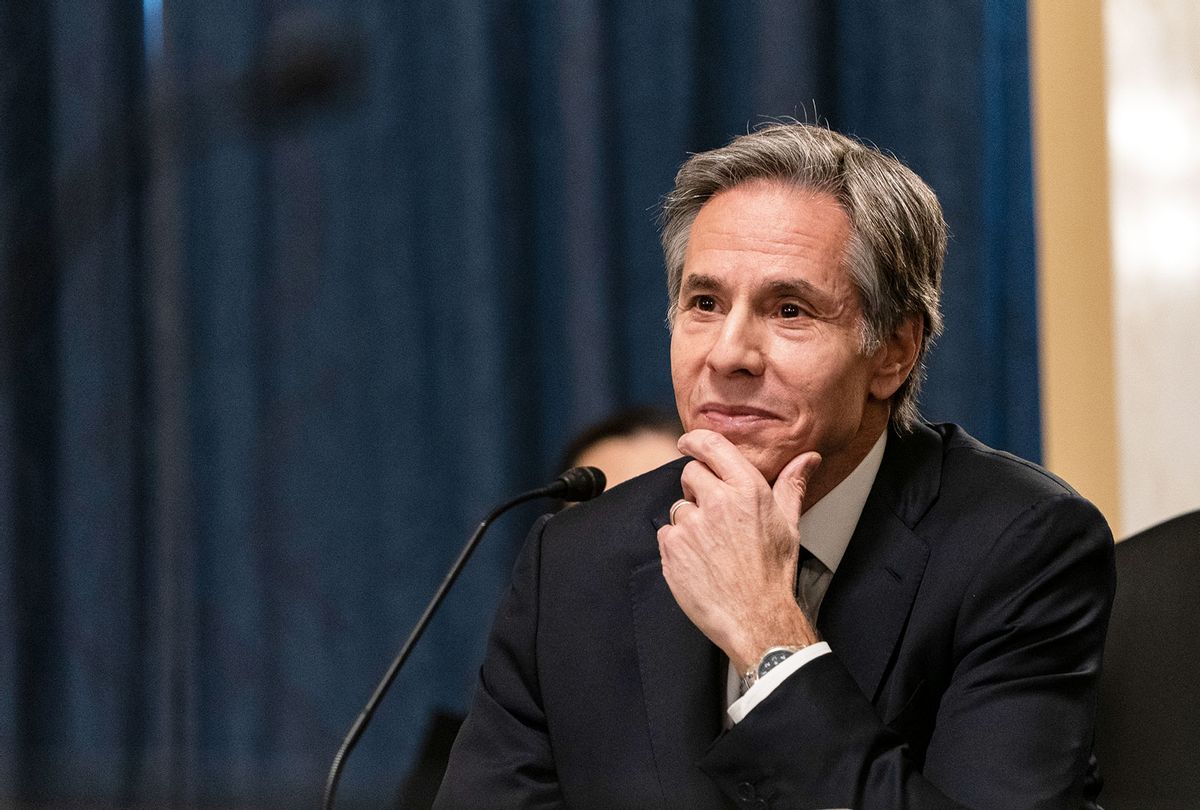 Antony Blinken speaks during his confirmation hearing to be Secretary of State before the US Senate Foreign Relations Committee on January 19, 2021 in Washington, DC. Blinken was previously Deputy National Security Advisor and Deputy Secretary of State in the Obama administration. (Alex Edelman-Pool/Getty Images)
--

As Secretary of State Antony Blinken tours Asia on his first trip abroad, President Biden's base at home may realize that Biden's China policy will be exactly as risky as they feared it would be before the elections.

Biden's foreign policy team singled out China as the "biggest geopolitical test" for the U.S. two weeks ago, and we may be headed straight towards a new Cold War – the thing progressives have been warning about.

The China strategy, as Blinken said just days ago, "will be competitive when it should be, collaborative when it can be, and adversarial when it must."

A national security document revealed by the Biden administration ahead of Blinken's Asia tour described China as "the only competitor potentially capable of combining its economic, diplomatic, military, and technological power to mount a sustained challenge to a stable and open international system."

For years, the Asia front has been about deterrence and power projection, in terms of U.S. foreign policy. For the large part, the U.S. really hasn't dared to set foot in the Indian Ocean, the way it does in most other places around the world.

The U.S. is well on its way to military over-stretch, and on a path to biting of more than it can chew. More importantly, as Jackson suggests, the U.S. has no business in the Indian Ocean and is facing a credibility problem, with no military bases, no territories, no commitments and no allies to defend in the Indo-Pacific region.

In historic terms, U.S. foreign policy is in uncharted waters and way out of its depth, trying to breathe down China's neck in a risky power-projection effort. "In the case of the Indo-Pacific, an imagined sphere of U.S. interest that puts the Indian Ocean on a par with East Asia could lead to disaster," Jackson warns, further adding:

Expanding the navy's presence in the Indian Ocean could make sense if the United States needed to be prepared for the sudden outbreak of war there. But China's main conflict is on land in the Himalayas — against India, a dispute that does not concern U.S. interests. And China will not remain passive as it perceives the U.S. military further encircling it. The surest path to preventing war in the Indian Ocean is restraint, not more troops in defense of a nonexistent redline. Greater militarization of this part of the world benefits nobody and costs the American taxpayer all the while.

That ties in well with progressives' overall foreign policy goals of pointing the U.S. away from unnecessary, risky and costly military endeavors with no clear objectives other than "toughening up" on China. Biden's national security adviser, Jake Sullivan, recently said that "every element of what we do in our foreign policy and national security ultimately has to be measured by the impact it has on working families." In that respect, the apparent China policy will be tough to defend in front of most of the Democratic left.

Things are about to change, and Blinken's Asia illustrates that. The new "Quad" arrangement, including India, Japan, Australia and the U.S., is really a club created to counter rising Chinese power in the region.

The U.S. will also play up the suffering of the Uyghur people in China's Xinjiang region, known to many Uyghurs as East Turkistan. There is no doubt that the Uyghurs are suffering at the hands of the Chinese government, while enduring organized, targeted attacks on their ethnic group. Some progressives, understandably enough, are joining U.S. hard-liners in endorsing the Uyghur demands for autonomy. As Zoe Williams at the Guardian argues, progressives can't close their eyes to the internment camps while arguing against a new cold war.

The new American strategy in the Asia Pacific region, vis-à-vis China, seems to be to militarize and fire up the whole region, while expressing concern about the human rights disaster suffered by the Uyghurs. Personally, I am skeptical about how much the U.S. government actually wants to help the Uyghur people. More likely this is about the State Department seeking a "human rights" excuse to do exactly what it wants to do — open a new military front in the Indian Ocean.

One should look no further than the infamous nuclear tests conducted by the U.S. in the Marshall Islands to see that in Asia, human rights is a secondary concern for U.S. policy. At least 67 nuclear devices were detonated in the Marshall Islands and local people are still suffering the effects even today, with numerous health problems and rights infringements as a result, as documented by the UN special rapporteur in a report for the General Assembly in 2012. I don't have to tell you that a greater U.S. military presence in Asia means nothing good for people in small or big countries in the region. It means more inhumane weapons testing, more risky micro-conflicts and micro-incidents, but also more military expenditure at the expense of progressive goals and the left agenda at home

Blinken seems to be headed toward a foreign policy strategy in Asia that's exactly the opposite of what Biden's base (or at least its leftward half) hoped it was voting for.

Even before Biden announced is foreign policy nominations, there was already concern that his foreign policy wouldn't be the progressive rethinking many of his Biden's voters signed up for. Confrontation with China poses a clear threat to the progressive agenda in general, as recently argued by Jake Werner for The Nation. Centrists like Senate Majority Leader Chuck Schumer are eager to push a get-tough strategy on China, but such a hostile posture could backfire as the Biden camp prepares for the 2022 midterm elections. Werner argues that "intensifying competition with China may render impossible a new progressive approach to globalization that is essential to winning an inclusive and environmentally sustainable economy."

In that scenario, money will flow into the military-industrial complex and not into what ought to be Biden's core issues, including college debt, health care, COVID relief, fighting climate change, developing green energy and other services. Escalating with China seems entirely unnecessary, in terms of national defense and any larger conception of the national interest.

"As Trump's trade war shows, the outcome of a deepening rivalry with China is not likely to be friendly competition over who will develop the best green technologies," Werner writes. "Instead, exacerbating insecurities in both countries will promote increasingly rancorous conflicts over global markets and increasingly dangerous geopolitical tensions over the control of trade routes and strategically important countries."

In Van Jackson's Foreign Affairs article, he argues that Biden has plenty of repair work to do in East Asia and the Pacific before considering expanding America's sphere of influence deep into the Indian Ocean, a region that doesn't impact vital U.S. interests. But he ignores an obvious and painful fact: The U.S. has never needed to have its vital interests at stake in order to get itself into the next big overseas mess.

Biden should recall that foreign policy is not immune from electoral concerns. In 2006, when the House and Senate turned blue in a massive wave, the Iraq war — which Tony Blinken had supported as "tough diplomacy," if conducted by other means — dominated the midterm elections, and Republicans lost a House majority they had maintained for 12 years. Similarly, the 2022 midterms, when many centrist Democrats may face progressive challengers, won't be exempt from foreign policy either. Decisions Blinken makes now will be a part of the analysis. Biden must be prudent with the narrow Democratic majority he enjoys so far. His foreign policy could make it or break it.