All about pie birds, the whimsical Victorian-era baking tool

Your grandmother had 10 of them, but do you really need one to make a good pie? 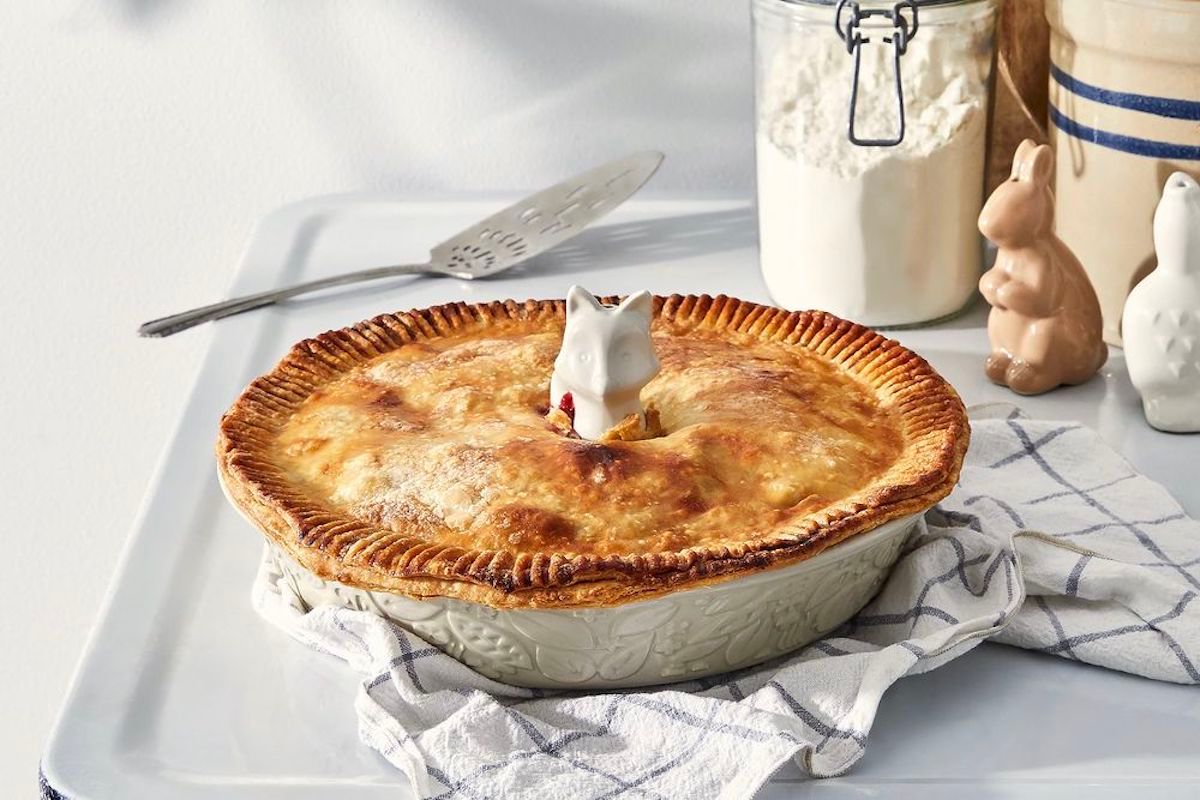 While you've likely heard the nursery rhyme "Sing a Song of Sixpence," with its "four and twenty blackbirds baked in a pie," it would probably surprise you to find a bird's head peeking out of your fresh-from-the-oven dessert, whether or not it "began to sing" upon being sliced.

Don't worry, though — there aren't live birds in most pies, let alone two dozen. While the rhyme possibly alludes to the trials and tribulations of Henry VIII and Anne Boleyn, it may have served as inspiration for pie birds: hollow ceramic figurines designed to vent steam from the pastries, according to Linda Fields, author of "Four & Twenty Blackbirds, Vol. 1 and 2," an anthology about the avian kitchen helpers.

The precursor to pie birds, known as pie funnels (or vents, or whistles), were developed in the Victorian era in Britain as a tool intended to keep juicy fruit and meat pies from bubbling over, and to make for a crispier crust. Back then, bakers put small, ceramic, cylindrical or hourglass-shaped funnels in the center of double-crust pies, to release steam. Around the 1930s, ceramics companies in the U.S. started taking artistic liberties, likely drawing on the nursery rhyme, and the vents morphed into whimsical birds with open beaks. Fields notes that the first documented pie bird was "a rooster with an S-shaped neck, made by the Pearl China Company in Ohio," adding that in the years that followed, thousands of different iterations were made. Some companies also made similarly styled elephants, giraffes, pigs, dragons, and mustached chefs, among others, but the most popular was the blackbird.

Pie birds are nestled into a filled pie's center, then covered by the top sheet of dough around the critter's neck. When baked, the bird appears to hatch from the center of the pie, steam shooting out of its beak (or head, or trunk).

While at one point the ceramic sous-chefs were common sights in bakeries, cooking shops, and home kitchens, pie funnels — animal-shaped or otherwise — fell out of fashion by the mid 20th century, which Fields credits to fewer people baking at home, as well as the invention of frozen pie crusts as a stand-alone retail product (patented in the 1950s and ubiquitous by the mid 1960s).

Plus, strictly speaking, pie birds are not necessary to bake a good pie.

When a double-crust pie is in the oven, the fruit (or meat, if you're making something savory, like a chicken pot pie) filling juices start to boil — and when the water turns to steam, it looks for a way to escape, usually through the weakest part of the crust's crimped edge. Frequently, pies without vents rupture and some of the filling spills over the side, making a mess. It can also render the top crust soggy and the filling soupy, instead of that sticky-thick texture you can drag a fork through. However, to avoid a sloppy, less-than-perfect bake doesn't mean you must shove a ceramic funnel into your pie: It's as simple as cutting slits or shapes into the top crust, doing a lattice-top crust instead, or using a crumble topping (or forgoing a top crust altogether!), which allows steam to escape without sacrificing the pie's texture. It's also not easy to cleanly remove the pie birds, which results in an unsightly crater in the center of the pie. (Though one could see this as a positive: another reason to pile on the whipped cream or a scoop of vanilla, perhaps?)

Some professional bakers have seen a resurgence in the popularity of pie birds just in the past couple years, as younger generations discover the tools on eBay, Etsy, and vintage shops, an increasingly popular way to shop for classic kitchen tools. "I definitely think they're having a heyday right now, which might be due to more people baking because of the pandemic. But I feel like there's a renewed interest in food traditions, so that could also be why we're seeing them again," said Kristen Daily, owner of Pie Bird Pies, a catering and pop-up pie company in Des Moines, Iowa.

Julie Albertson, owner of The Texas Pie Company in Kyle, Texas, argues that the newfound interest in the fanciful kitchen tool has more to do with how photogenic or, dare one say, Instagrammable it is.

"It's really just a cute way to showcase the pie and present it on the table," Albertson notes.

Both Daily and Albertson have numerous pie birds, both noting that customers will gift them their thrift-store finds. While they do use them when making a pie at home, neither reaches for the gizmos when baking in a professional setting. Similarly, Fields has over 1,000 in her collection (her favorite being a mother bluebird with chicks in a yellow nest made by Artisan Galleries), but most of hers are just for show.

Still, for many home cooks, the birds add a touch of playfulness and are a way to bond with other bakers. For Pie Bird Pies, it's certainly the latter. Their namesake has become a vehicle for connection with their customers. Many who visit Daily's pie pop-ups will tell her about older family members using pie birds.

"A lot of people remember their grandmother using them and will tell us about how tasty her pies were," Daily said. "It's a fun way to connect and talk about a shared love of pie."