My roommate is having half-vaccinated people over, unmasked — and I'm upset

This week in Pandemic Problems: A reader is vexed by a semi-vaccinated friend-of-a-friend coming into her apartment 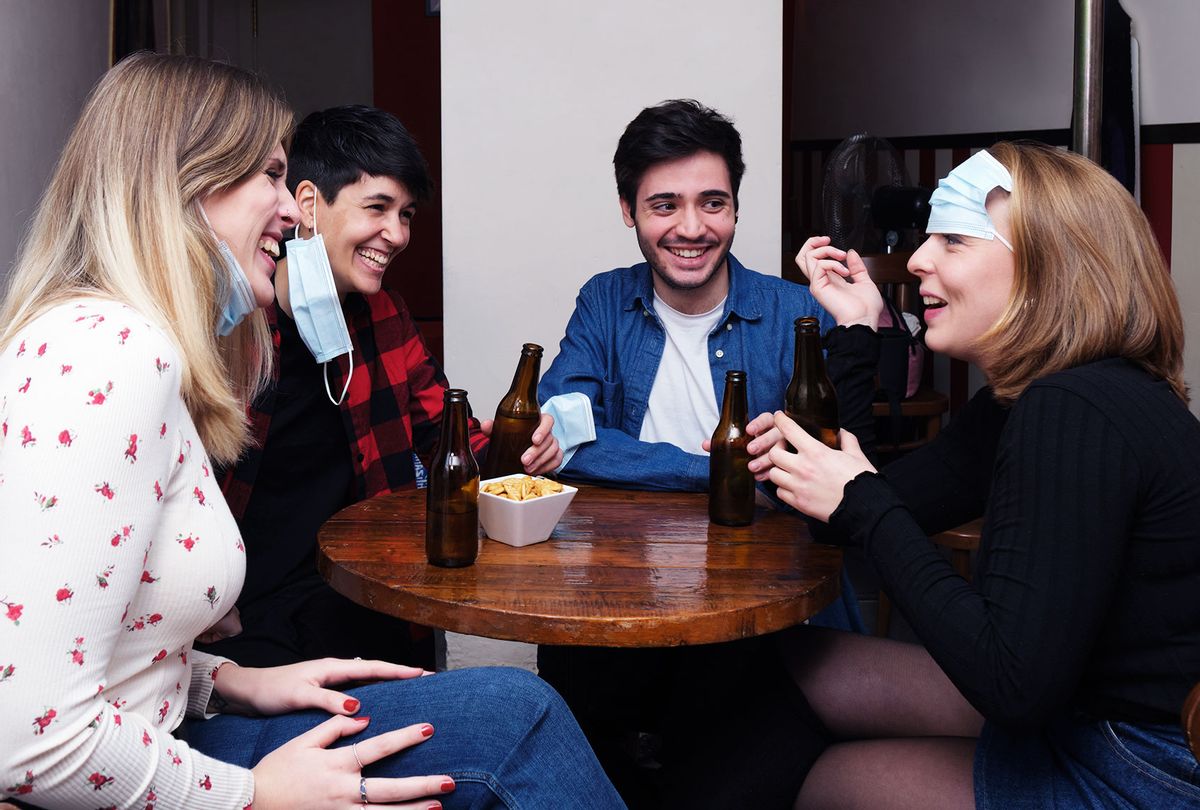 I've weathered the pandemic this past year with my roommate in San Francisco. We met on Craigslist in 2018, as roommates often do, and are a rare success story. We actually get along! In pre-pandemic days, we'd bike the city together and get drinks together. We went from being internet strangers to close friends pretty quickly. So when the city underwent its first shelter-in-place order in March 2020, I didn't feel complete dread being hunkered in an 800 square-foot apartment with my Craigslist roommate. And when many of my friends and coworkers took part in the massive exodus from San Francisco, part of the reason I didn't go home and live with my parents was because I had her.

Now of course, one year later, not everything is rainbows and butterflies in this apartment. As mostly everyone has found out, living and working within the same four walls with anyone certainly has its challenges. There have been times where I've felt annoyed at her consistent lack of cleaning up after herself in the kitchen (she always leaves slices of lemon on the cutting board in the morning!), but the pandemic has definitely made me more tolerant of such nitpicky behavior. I'm just happy I live with someone who I actually want to spend time with — and that we're both healthy.

But lately I've been at my wits' end with an issue that I believe is putting my health and safety in jeopardy. Her best friend — let's call him Giggy (he is in fact a gig worker) recently received the first dose of one of the two-dose Moderna vaccines, because of his occupation. I hadn't seen him in her presence without a mask for months. But now it appears that five days after dose 1 he feels entitled to come over, unmasked, and eat, drink, and breathe as he pleases. WT actual F? She invited me to chill with them and watch TV (she's also been unmasked with him); but I declined, and instead stayed in my room and cranked my music like an angsty teen.

Am I in the wrong for thinking that it is a bit premature to have a maskless friend over who isn't fully vaccinated? I meekly tried to voice my concern to my housemate about this, and she shrugged it off and said, "he's already building immunity." I know her bestie still has another two weeks at least until he receives his second dose, and from what I've read, that means 2 weeks after that until he's fully immune. Frankly, I'm pissed that this guy keeps coming around and breathing in my space, and I'm afraid I'll get sick — or me or my housemate will get him sick. What do you think I should do? I'm debating moving back with my parents for a while, knowing that I can't trust my space and my housemate.

Dear Vexed by the Half-Vaccinated,

Your vexation with the half-vaccinated gig worker is certainly understandable, given the moral, social, and epidemiological nuance of your situation. Admittedly, I would be vexed too. It strikes me as a bit insensitive and inconsiderate of your roommate to invite a friend over without asking you if you're comfortable with it or not. Though you did not say it directly, you implied that you must have had a conversation about guests with your roommate at some point and decided not to have un-masked guests over during the pandemic, and this is now the first. And I'm also guessing that you and your roommate have discussed being in a shared "bubble" together, and it sounds like Giggy is violating that unwritten bubble agreement.

Indeed, in the Before Time, I'm guessing it would be normal to come home from work and find your roommate hosting a guest. If your roommate had to ask your permission then, that would be a bit strange. But pre-pandemic social rules no longer apply, especially when it comes to sharing a home together. The apartment you live in isn't just a place where you sleep at night — it's a literal physical barrier that keeps you both safe from a deadly virus that has killed 2.68 million people around the world (as of this week). And it takes two to keep that barrier airtight. So yes, there is a lot at stake.

But let's talk about your friendship with your roommate first. It sounds like up until now, things have been good. And if there's anything the pandemic has taught us, it's that the people in our lives, our friends and family, matter. We need them to survive.

Vexed by the Half-Vaccinated, I sense a certain fondness you feel toward your roommate. A kinship that was strong enough in the beginning of the pandemic to make you want to hunker down with her. Surely, this time has been a bonding experience and has only made your relationship stronger. Yes, like you say it hasn't been all "rainbows and butterflies" — but what relationship is consistently "rainbows and butterflies?" Hint: None. Nada. Life is full of rough patches and uncertain moments, and this is just one of those with you and your roommate.

I don't want to excuse her behavior, because it's definitely not OK. But I do think there's a better solution than moving back in with your parents and avoiding the matter at hand.

First, let's look at the data about the risk you're dealing with here. You say that Giggy received the first dose of his Moderna shot five days ago. The Centers for Disease Control and Prevention (CDC) states a person is considered to be "fully vaccinated" two weeks after the second dose of the Moderna vaccine. The CDC's guidance is clear about anything before that two-week mark: "If it has been less than 2 weeks since your shot, or if you still need to get your second dose, you are NOT fully protected," the CDC states on its website.

Both the Moderna and the Pfizer vaccines are two-doses for a reason. The first dose of the vaccine trains a person's immune system to recognize and attack the spike protein on the surface of SARS-CoV-2. The second dose, which is given four weeks later for the Moderna vaccine, boosts antibody levels to provide a person with better immunity. The fourteen day period after the second dose isn't a random number. That is when — according to clinical trials — a person has reached their protection threshold. And the second dose helps train one's B and T cells to give the coronavirus their very best fight.

But does immunity start after one dose?

Technically, yes. According to a document Moderna submitted to the FDA, the vaccine likely provides 80.2% protection after one dose. But there are a few caveats: this was measured 28 days after the first dose (not five days after); how long that immunity lasts is unknown; and whether a first dose blocks transmission of the virus is unknown.

However, Moderna tested its clinical trial volunteers before they received their second doses on their 28th day. Their findings found that there were fewer asymptomatic infections among people receiving the vaccine compared to those who got a placebo, suggesting that transmission could be decreased. But again, that happened 28 days after receiving the first dose — not five.

I think you need to sit down with your roommate, and let her know that you don't feel comfortable having Giggy over until he's fully vaccinated — which is two weeks after he receives his second dose. It sounds like you two have made it this far without getting COVID-19, and I'd hate to see you risk it now. If your roommate doesn't hear you or respect your boundaries, then I certainly support you leaving. You need to do what's best for yourself. And I think this would certainly warrant rethinking your friendship.

Have the conservation, be honest about your totally valid fears, and take care of yourself. Vexed by the Half-Vaccinated, I'm rooting for you.

"Pandemic Problems" is an advice column answering readers' pandemic problems — often with help from public health data, philosophy professors and therapists — who weigh in on how to "do the right thing."  Do you have a pandemic problem? Email Nicole Karlis at nkarlis@salon.com. Peace of mind and collective commiseration awaits.