The Nas generation of scholars: Finally, a Grammy for the hip hop artist who led me to liberation

His discography gave me a blueprint, unleashing a flood of curiosity about Black history and literature 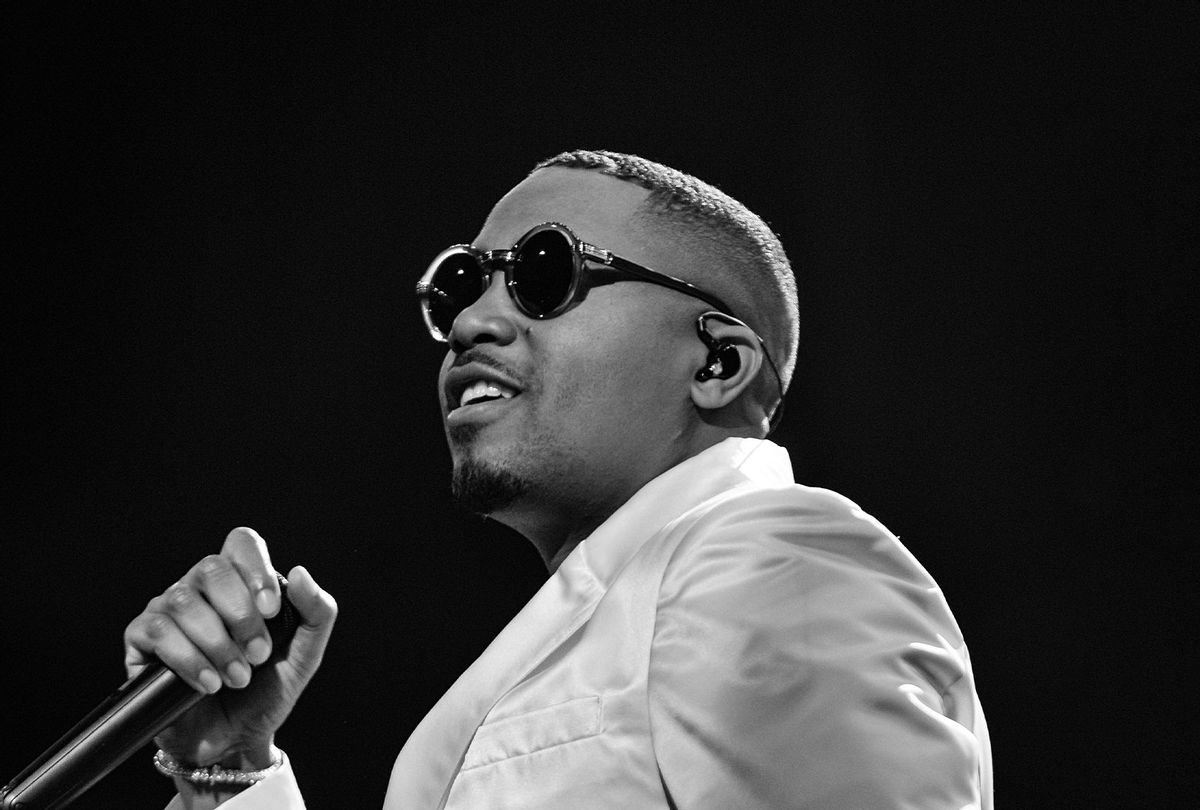 During an interview with NME in November, speaking on the album's lead single, "Ultra Black," Nas said that he attempted to create a record similar to James Brown's 1968 hit, "Say It Loud ― I'm Black and I'm Proud." Esco added that it was necessary for Black artists to make similar anthems because of "the foot on our necks."

As Nas collected his first Grammy, thanks to an album led by a single celebrating Blackness, I'm enjoying my fifth month of sobriety from cocaine addiction, and excelling inside the halls of Columbia University, where I'm studying Blackness. Ironically, my journey began with Nas's critically creative musical catalog.

The Ford F-150 cruised across the finish line. I wasn't in the NASCAR business, though. I was trafficking heroin. And after a 14-hour trip, I'd finally passed over the Jasper County, Mississippi line separating Vossburg from Laurel in Jones County, my then-home city.

Stuffed in a hidden compartment behind the glove box was a scary amount of drugs. Lyrics from Jay-Z's commercial banger "Roc Boys (And the Winner Is)" — they don't know the feeling when them things get across — playing in my mind. Jay's words resonated with me; they seeped out of my pores as if they were a part of my genetic makeup. Making it home safely after traveling through four states with a truck full of heroin felt like being released from prison. I finally made it. Leaving my city to traffic drugs was an uncertain job. I never knew if I'd make it home until I actually made it home.

But this triumphant feeling was an illusion, an act of rebellion that duped me into believing that I possessed control. Self-governing my life had always been elusive: public housing-living, my grandmother's checks from the government, addiction, group home-living, and jail always collided with agency. So I held close to delusions. And outsmarting state troopers to flood Laurel with heroin is what I lived for, until I could find something real to believe in.

To survive within my world of illusions I had to suppress feelings. At any moment I could be subjected to a drug raid. I understood that getting pulled over by state troopers would've had deleterious outcomes. I was once a victim of an armed robbery, and I knew the probability of experiencing another was high. In fact, my crew and I knew that E-Money and Black were plotting to either rob or kidnap me. It wasn't anything that E and Black said. We just knew it from their body language, their energy and having an understanding of how E and Black operated in the streets. They were former kingpins turned heroin addicts. Even when they were moving kilos, they were known to rob their fellow kingpins for bricks of cocaine. I understood that I'd have to seriously hurt these guys or they'd kill or seriously hurt me. I was given a semi-automatic 9mm by a crew member and instructed not to serve Black and E-Money any drugs unless a certain crew member was with me.

Dealing drugs for a living was heavy. The illusions of cocaine use and staying freshly dressed made life bearable for me. But underneath the fly clothes and lines of coke were nightmares of murder and jail. My grandmother even began having nightmares about my demise. The only respite, a sense of freedom, I found was in the crevices of Nas' music. With his discography as my blueprint, a flood of curiosity centered around Black history and literature grabbed my attention, and provided a lens for me to see a world that was bigger than myself. He gave me language to express my ideas of Blackness. Songs like "Queens get the Money," "These Are Our Heroes," "Testify" and "N.I.*.*.E.R (The Slave and the Master)," among several others, found Nas name-dropping writers and leaders like Langston Hughes, Huey P. Newton, and Jonathan and George Jackson. Names that I was, at most, only vaguely familiar with at the time. His social commentary about poor schools and health care disparities, combined with the aggressive energy that I recognized, spoke to me.

I began buying books written by and about the men and women Nas rapped about. Reading became a hook, and I developed a freeing form of addiction to them. Before linking with my drug supplier in his city, I'd stop at a local bookstore in Louisville or Cincinnati to purchase new reads. Every time I went home, not only did I have a truck or book bag full of drugs, I also had a pile of books to pore over. Since embarking on this Nas-inspired educational journey, one theory that I've been struggling with is the idea of Blackness, and what Blackness means to me.

"What are you reading?" a Black police officer asked me.

"'Black Jacobins' by C.L.R. James," I answered. He then asked whether or not I was a college student.

"Yes, at the University of Louisville," I lied, because I didn't want to raise suspicion.

The Greyhound bus station in Nashville was fairly empty. A handful of patrons rested their eyes while their heads leaned back against their seats. Others lounged in chairs with their feet resting atop their luggage. I, dressed in a brown Akademiks tracksuit two sizes too big, complete with matching Jordan 11's, sat at a table reading about Blackness, and taking notes. At my feet, resting against my leg, sat a book bag filled with three ounces of heroin.

"I meet a lot of students from Tennessee State," he said. "What is it like being a Black student at the University of Louisville? Do y'all stick together?"

"We have different experiences," I lied again. "We're not connected by the things that people refer to as Black culture like hip hop, jazz, blues, Jordans, spades, the electric slide, basketball, etc. Nor are we linked by the content that's pumped out of 'urban departments.'"

Barack Obama was pursuing his first presidential campaign. The police officer asked me to share my thoughts about Obama possibly becoming the first Black president.

"If Obama wins he'll be part of a system that has been designed to stifle Black life," I said. "It'll be interesting to see how he deals with this. Will he destroy the current system, and rebuild a system that's free of misogyny, hierarchy and gender bias? Or will he use his presidency to give himself leverage? I don't know. But I do know that Obama's experiences as a Black man in America are a far contrast to my experiences, as well as the experiences of my uncles."

The cop seemed interested in what I was saying, and I was excited to talk about a topic that I was passionate about. "What do you think needs to happen?" he asked.

"To me, Blackness is about constructing a liberatory politics that is dedicated to uprooting the current economic and political system, and creating a system that is free of hierarchy, gender bias, racism and misogyny," I said.

The police officer applauded my "success" at the University of Louisville as a woman's voice announced my boarding number over the PA system. I stuffed my book and notebook into the book bag that held my heroin before boarding the Greyhound.

Even after discussing my Nas-inspired ideas centered on Blackness, I still couldn't figure out how to transform this newfound passion into something positive.

The light over the stove, combined with the glow from the television, shed just enough light over the saucer and the thin razor that sat between my right thumb and index finger. I slid the razor across the saucer, separating lines of cocaine to snort.

It was close to 3 a.m. Black and E were still a threat, so the 9 mm pistol sat next to me on the couch. Down the hall in my bedroom a young lady was asleep. Someone's headlights flashed on my street. I figured it wasn't the Drug Task Force; they would've cut their headlights off. I peeped out the window. It was Black and E. I hid the plate of cocaine, stuffed my pistol inside my pants, and suddenly became sober.

"What up, cuz?" they said with sly smirks on their faces as I opened the door.

They were reading me to see where my mind was at. My t-shirt was positioned so the handle of the gun showed.

"Cuz, we short," Black said, while stuffing crumpled dollar bills into my palm.

Stuffed inside a small pocket of my jeans were a few bags of heroin I hadn't sold that day. I wanted them out of the house so I could protect the lady who was asleep in my bedroom. Instead of reaching in my pocket for the heroin, I led Black and E outside, walked to my car, where I pretended to get some heroin out of the backseat.

I gave them four bags and they left. But I knew they would circle back to my house. I walked inside only to walk out the back door, where I stood on the side of my house. A few minutes later I saw Black and E coming down my block with their headlights off. I didn't give them time to get out of the car before I came from around the house.

They were surprised to see me. "Cuz, did I drop my wallet over there?" Black said.

"I told you left that shit at home," E said to him.

Two days later I was on the Greyhound again, buying more heroin. My grandma had started drinking again. I hadn't told her what happened with Black and E, but I believe grandmothers are gods on earth and feel their children's energy. With tears in my eyes, I stared out of the Greyhound window asking God for guidance. I was tired of the streets. In a show of defeat, I dropped my head. In my lap was an issue of XXL Magazine, with Lil Wayne on the cover, and Carter G. Woodson's "Mis-Education of the Negro." Then God spoke to me: You dummy, you love hip hop magazines and history books. Go to college and study journalism and history.

I finally figured it out. I was going to enroll in college to study Blackness — African American history.

But I never made it home from this particular trip. I was the subject of a drug bust on Jones County's Interstate 59. It would be nearly four years before I would be able to follow through on seeking to understand Blackness.

During my bid, I continued reading about topics that Nas rapped about. In prison, books shed a sliver of freedom over my life. Titles like "Convicted in the Womb" by Carl Upchurch; "The Man Who Cried I Am" by John A. Williams; "Mumbo Jumbo" by Ishmael Reed; "Manchild in the Promised Land" by Claude Brown; "Coming of Age in Mississippi" by Anne Moody, and several others, gave strength to my experiences and language to my goals. Because Nas pointed the way first, I discovered a blueprint for me to create something that is bigger than me.