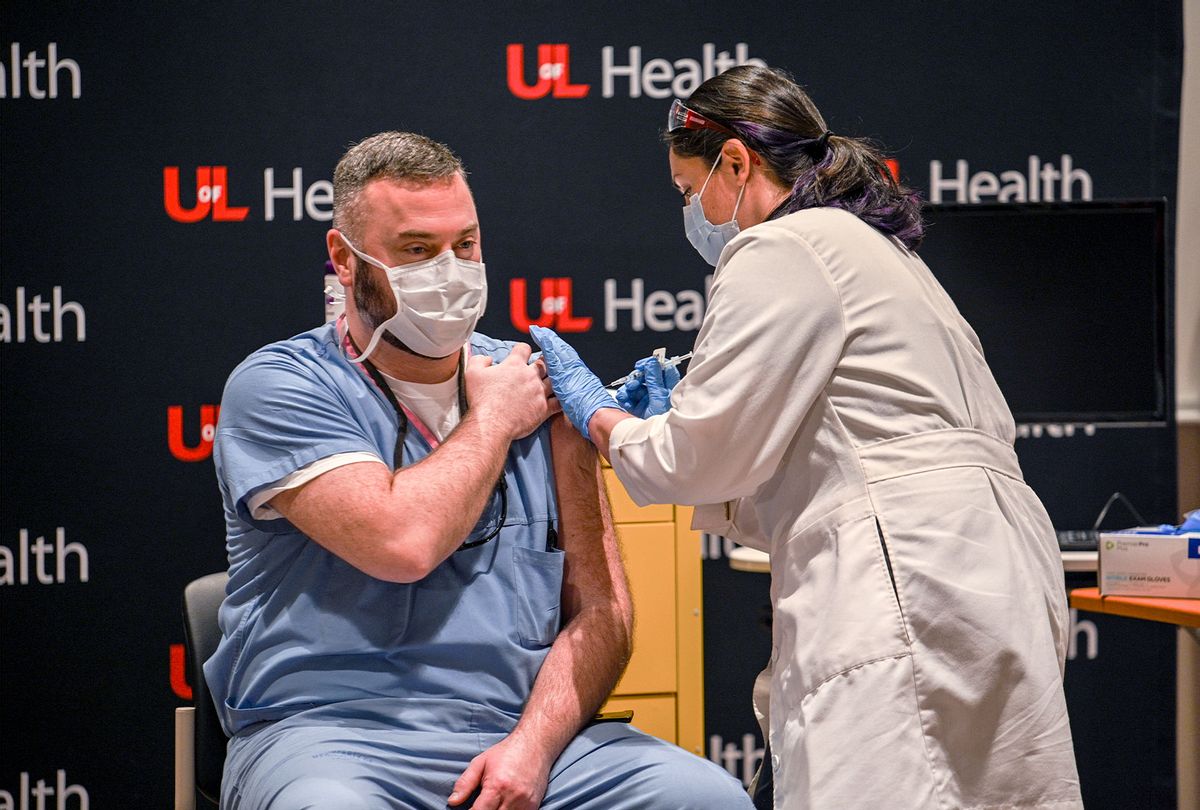 Dr. Jason Smith receives a COVID-19 vaccination at University of Louisville Hospital on December 14, 2020 in Louisville, Kentucky. The Pfizer-BioNTech vaccine became available for specified use on Monday morning to five members of hospital staff. Dr. Smith became the first recipient of the vaccine in the state of Kentucky. (Jon Cherry/Getty Images)
--

It's a year into the pandemic and U.S. deaths approaching 540,000. It turns out that Joe Biden's biggest problem is no longer getting adequate numbers of coronavirus vaccines or solving inoculation logistics. The challenge is persuading hesitant Americans – including political opponents – to accept the tax-paid gift of disease protection.

What has become clear is that some combination of Black Americans made wary of medical malpractice, the widening anti-vaxx movement and a healthy dollop of white Republican men may deny the country the "herd immunity" needed to bury worries about coronavirus.

We're looking at partisan politics once again, complete with charges and countercharges threatening the very effort to dump disease and get on with the business of full, safe re-opening.

It's of note not only for public health purposes but because getting a fix on American values continues to divide and befuddle us.

"While there are degrees of opposition to vaccination for the coronavirus among a number of groups, including African-Americans and antivaccine activists, polling suggests that opinions, in this case, are breaking substantially along partisan lines," intones The New York Times.  It points to "deep skepticism among many Republicans, a group especially challenging for him to persuade."

What is remarkable here is not the relative silence of Republican leadership in promoting vaccines and public health in the name of seeming to help Biden. Emerging, if incomplete, data show that the disease is hitting hard areas, particularly rural, that showed stronger support for Donald Trump.

Even in the weeks after the November elections, the analysis showed that Trump earned big voter support in places where COVID-19 was most rampant. An Associated Press report showed that in 376 mostly rural counties with the highest number of new cases per capita, 93% of those counties went for Trump.

We're hearing more along these lines now from focus groups as well as public statements and more studies.

Naturally, there has been attention on Trump, who apparently got the vaccine in December while still in the White House, but who has not spoken to would-be followers to do so as well. Indeed, there is an overlap between those who believe in election fraud and those who oppose vaccines, as the conspiracy-believing QAnon movement is making clear.

Asked about it, Biden said it would be nice to have Trump's participation, but he wasn't going to beg The Former Guy, adding that word from local doctors and clergy was more effective. We are seeing receptivity now in the Black community.

For self-serving reasons, why wouldn't Trump want to issue a video telling supporters that they should take the vaccine he supposedly created (or paid for)  – just to hasten re-opening?

We learned this week that one in four U.S. House members have opted against vaccines—all Republicans and Trump supporters. That is in violation of what I, as the employer here, want to see.  Minority Leader Kevin McCarthy (R-Calif.) got vaccinated, but he spends time attacking Biden over border issues rather than promoting the vaccine. Senate Republican leader Mitch McConnell (R-Ky.) was vaccinated but only spoke about vaccines on the day of his inoculation. Texas Gov. Greg Abbott has made re-opening his state 100% much more a priority than promoting vaccines, insisting that this is an individual decision.

The idea that people will bitterly complain about government orders for protective public health protocols and still not take personal responsibility is hard to understand. I get the idea of insisting on individualism, on freedom, though I believe that personal freedom carries responsibility when it touches on my well-being. Isn't it possible for individuals to decide to vaccinate or wear a mask without a government order?

How is it Biden's problem alone to persuade partisan opponents to do the right thing that happens to coincide exactly with their own professed desires? Where is Republican leadership if this is identifiably a Republican problem?

The link among Republicans to vaccine opposition is strong enough to prompt Republican pollster Frank Luntz to have pulled together a focus group of Republicans who believe that coronavirus threats are real, but who oppose vaccines.

The Washington Post said participants were adamant that while they or family and friends had gotten ill, "They blamed their hesitation on factors like the unknown long-term effects of new vaccines … They also accused politicians and government scientists of repeatedly misleading them this past year — often echoing Trump's charges that Democrats used the virus as an election-year weapon and overhyped its dangers."

What came through was that political appeals to get the shot were only hardening their opposition, said The Post.  "These people represent 30 million Americans. And without these people, you're not getting herd immunity," said pollster Luntz. Still, by the end of the two-hour session, all 19 participants, which included public health Dr. Tom Friedan, said they were more likely to get vaccinated.