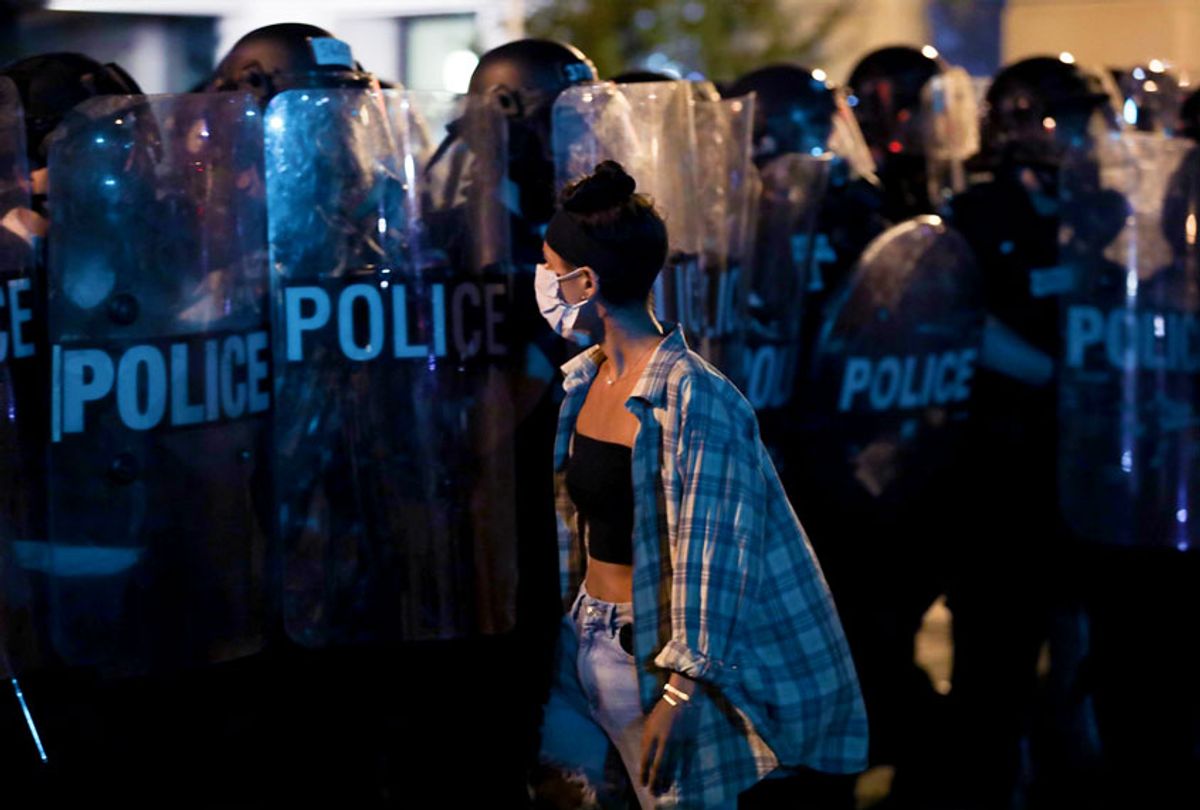 A demonstrator is seen in front of a police barricade during a protest over the death of George Floyd, an unarmed black man who died after being pinned down by a white police officer (Yasin Ozturk/Anadolu Agency via Getty Images)
--

Following one of the most controversial debates in the state's legislature to date, the Kentucky State Senate just passed a bill that would make it a crime to insult police officers.

Senate Bill 211, inspired by the social justice response to Breonna Taylor's death, increases penalties for those convicted of rioting, which it defines as "public disturbance" of five or more people whose "tumultuous and violent conduct creates grave danger of damage or injury to property or persons or substantially obstructs law enforcement or other government function."

The bill also makes it a misdemeanor to "taunt," "challenge," or "insult" an officer with words or gesticulations "that would have a direct tendency to provoke a violent response from the perspective of a reasonable and prudent person." The misdemeanor is punishable by fines and up to 90 days of jail time, with no chance of bond over the duration of the riot.

State Sen. Danny Carroll, a Republican, the bill's lead sponsor and former law enforcement assistant, argued that the bill is designed to protect first responders and private property. "We need to send a clear message to those outside this Commonwealth that the welcome mat is no longer there if you plan to come to our Commonwealth to terrorize our people, attack our police, assault communities, assault people, assault first responders and destroy our cities," he said.

Carrol noted that the bill is modeled after laws in other states barring comments that could "reasonably" incite violence. Those laws –– which do not specifically address police violence –– are rooted in a First Amendment exception known as the "fighting words doctrine," which designates words that incite immediate violence as unprotected speech.

However, the legal footing of the bill remains in question, as Caroline Mala Corbin, a constitutional law professor at the University of Miami, told The Washington Post. Given that the language in the bill only addresses speech against police, it appears that "the government is trying to ban speech it does not like," she said. "And that is a paradigmatic violation of the free speech clause" of the First Amendment.

Sen. Gerald Neal, a Democrat who represents an area of west Louisville that is predominantly black, condemned the bill as a "hammer" on his district. "This is a backhand slap," he said. "And I resent it, I personally resent it. This is beneath this body. "

"Because you have power doesn't make it wise to use it," he continued, "Because you want to express your feeling doesn't mean you have the answer. You don't know what's going on in my district."

In a floor speech, Neal argued that the bill was ill-timed with Louisville still healing from the wounds of last Summer's protests and the police violence that erupted out of them.

"Why do I sound outraged by that?" he said "You can bond out of jail in under 48 hours if you've been accused of murder, arson or rape," he said. "But you can't do it if you taunt somebody because we've decided it's not right up here. We don't like it."