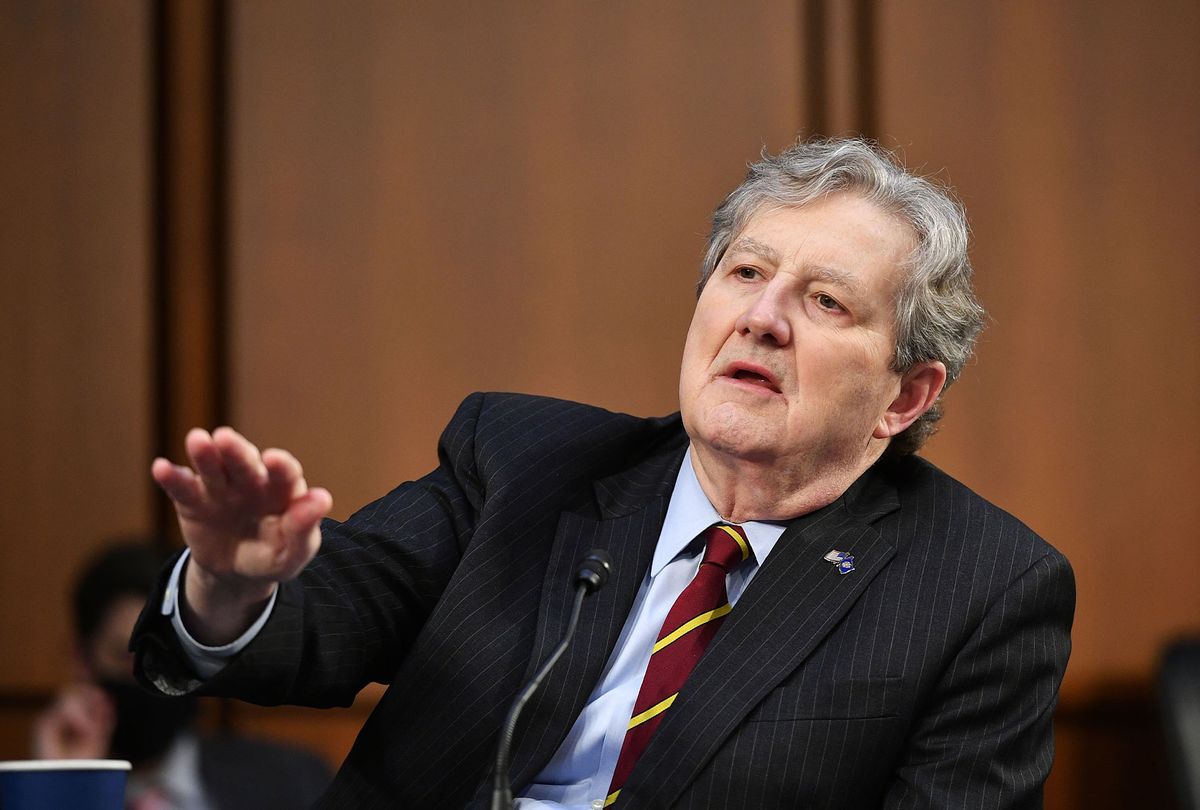 Several Republicans in Congress found themselves in the position of having to defend essentially unfettered access to guns in the face of yet another mass shooting, the seventh in the U.S. in as many days.

One Republican senator on Tuesday morning compared mass shootings in the United States to "a lot of drunk drivers in America that kill a lot of people" while downplaying the severity of the tragic events which have become an unfortunate reality. Louisiana's John Kennedy shared the off-colored remark during a Senate Judiciary Committee hearing about reducing gun violence in America, which comes just one day after a deadly shooting in Boulder, Colorado left 10 people dead.

The senator then dove headfirst into his comparison, which missed the mark.

"And I'm not trying to equate these two, but we have a lot of drunk drivers in America that kill a lot of people. We ought to try to combat that too. But I think what many folks on my side of the aisle are saying is that the answer is not to get rid of all sober drivers," Kennedy rifted.

"The answer is to concentrate on the problem," he added.

Hours after America's second mass shooting in a week, Sen. John Kennedy downplays the gun problem by noting that "we have a lot of drunk drivers in America that kill a lot of people. We ought to try to combat that too ... the answer is not to get rid of all sober drivers." pic.twitter.com/BvqhNvuWRJ

Following the senator's remark during the hearing, criticism aimed at Kennedy over the metaphor rang out on social media, which was swift and relentless.

MSNBC host Lawrence O'Donnell fired back: "Point taken. So let's make a gun as difficult to get as a driver's license." Fellow MSNBC host, Mehdi Hasan, wrote: "Drunk driving is illegal. Driving a car requires a test and a license, and a bunch of other regulation. This analogy from Kennedy is not only offensive but doesn't even make any sense or help his anti-gun control cause."

Mother Jones' Washington D.C. bureau chief David Corn also weighed in on the Kennedy example, stating: "These guys will die on any hill—no matter how absurd—to pander to gun fetishists." Political commentator and Twitch streamer Hasan Piker mocked Kennedy's commentary, tweeting: "any proposal that seeks to regulate the usage of guns to make it similar to vehicles gets absolutely obliterated by these people."

Other Republicans continued to defend their unwillingness to reform America's lax gun laws in the face of the seventh mass shooting in seven days.

Tennessee Republican Sen. Marsha Blackburn cited the Kenosha anti-police violence protests, where an armed gunman from another state is now being charged for shooting multiple protesters, as a positive example of why gun restrictions are bad.

"Every time there's an incident like this, the people who don't want to protect 2nd Amendment use it as an excuse to further erode 2nd Amendment rights," complained Wyoming Rep. Cynthia Lummis, on Tuesday. "Their ultimate goal is to abolish our rights."