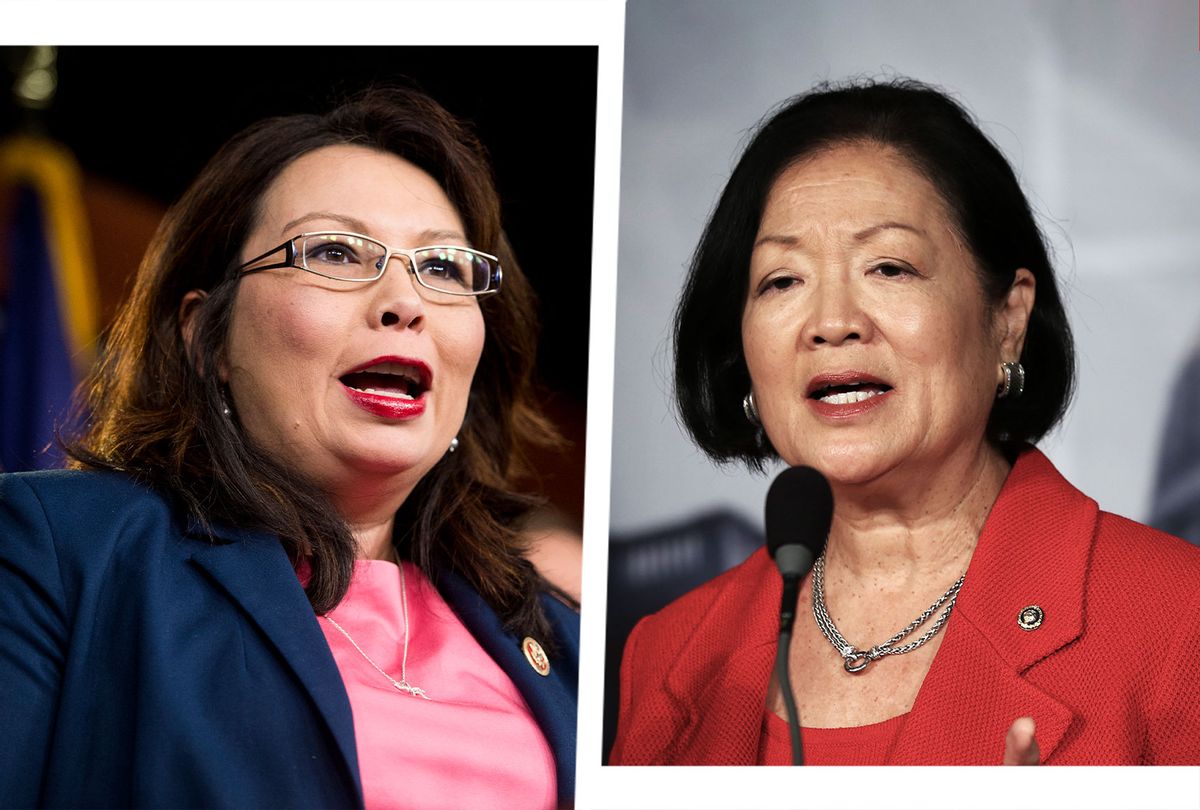 Duckworth and Hirono dropped their ultimatum late Tuesday after White House press secretary Jen Psaki announced that the administration would add a senior AAPI liaison "who will ensure the community's voice is further represented and heard."

"The President has made it clear that his Administration will reflect the diversity of the country," Psaki said in a statement to CBS News.

Duckworth, the first woman of Thai descent in Congress, and Hirono, the first Asian-American woman to serve in the Senate, welcomed the move. They are currently the only U.S. senators of Asian descent, although there have been seven others, including Vice President Kamala Harris.

"Senator Duckworth appreciates the Biden Administration's assurances that it will do much more to elevate AAPI voices and perspectives at the highest levels of government, including appointing an AAPI senior White House official to represent the community, secure the confirmation of AAPI appointments and advance policy proposals that are relevant and important to the community," Duckworth spokesman Ben Garmisa said in a statement to NBC News. "Accordingly, she will not stand in the way of President Biden's qualified nominees — which will include more AAPI leaders."

Hirono said she too would "continue voting to confirm" Biden's "historic and highly qualified" nominees after a "productive conversation with the White House today to make clear my perspective about the importance of diversity in the President's cabinet."

Earlier on Tuesday, Duckworth told reporters that she would block Biden's sub-Cabinet and judicial appointments after criticizing him for not including any Asian Americans among his 15 Cabinet appointments.

"I've been talking to them for months. And they're still not aggressive," Duckworth told reporters, according to HuffPost. "So I am not going to be voting for any nominees from the White House other than diversity nominees. I'll be a 'No' on everyone until they figure this out. … I will vote for racial minorities and LGTBQ, but anybody else I'm not voting for."

Duckworth said the "trigger" for her ultimatum was a tense phone call with Biden aides, including deputy chief of staff Jen O'Malley Dillon on Monday, according to Politico, who she said touted Vice President Harris' South Asian heritage when the senator raised concerns about the lack of AAPI representation in the Cabinet.

"To be told that you have Kamala Harris, we are very proud of her, you don't need anybody else, is insulting," Duckworth told reporters. "That's not something you would say to the Black caucus — that you have Kamala — we're not going to be putting any African Americans in the Cabinet — why would you say that to AAPIs?"

"We would like to have a commitment from the White House that there be more diversity representation in the Cabinet and in senior White House positions and until that happens I will be joining her in voting on non-diversity nominees," she told reporters, according to The Hill. "This is not about pitting one diversity group against another. So I'm happy to vote for a Hispanic, a Black person, an LGBTQ person, an AAPI person. I'd just like to see more diversity representation."

There are no AAPI members in Biden's Cabinet but Katherine Tai, who is of Chinese descent, was unanimously confirmed last week as the first Asian American U.S. trade representative, which is a Cabinet-level position but not one of the 15 federal department heads.

"I realize that we have Katherine Tai, but I don't think the trade representative is what the community understands as a Cabinet level," Hirono told CNN.

Biden previously nominated Neera Tanden, who is Indian-American, to be the head of the Office of Management and Budget — another Cabinet-level position — but Sen. Joe Manchin, D-W.Va., along with every Republican in the Senate, sank her appointment, ostensibly over Tanden's mean tweets about senators.

Biden has also named Asian Americans to several sub-Cabinet level positions. Dr. Vivek Murthy, who is of Indian descent, was confirmed as surgeon general on Tuesday. Biden has also nominated Julie Su to become the first Asian American woman to serve as deputy labor secretary. Asian-American lawmakers and advocates had pushed for both to be named to Cabinet positions, according to Politico.

House Veterans Affairs Chairman Mark Takano, D-Calif., said earlier this year that he was "profoundly disappointed" in the lack of AAPI representation in Biden's Cabinet.

"As much as I view myself as a friendly ally of this president, I think he's erred in [that] he has chosen to exclude Asian Americans from his 15 Cabinet secretaries," he told PBS News in January.

The issue has gained prominence in recent days after a gunman went on a shooting spree at three Atlanta-area spas last week, killing eight people, including six Asian women, and sparking a national conversation about anti-Asian racism.

Senate Majority Leader Chuck Schumer, D-N.Y., vowed to quickly advance two bills aimed at addressing the issue, according to The New York Times. The COVID-19 Hate Crimes Act, sponsored by Hirono and Rep. Grace Meng, D-N.Y., would assign a Justice Department official to "expedite the review of COVID-19-related hate crimes, providing support for state and local law enforcement agencies to respond to these hate crimes, and coordinating with local and federal partners to mitigate racially discriminatory language used to describe the pandemic."

A separate bill sponsored by Sen. Dick Durbin, D-Ill., would create new offices at the DOJ, FBI and Department of Homeland Security to focus on domestic terrorism.