110 years since the Triangle Shirtwaist Fire, its lessons are still unlearned 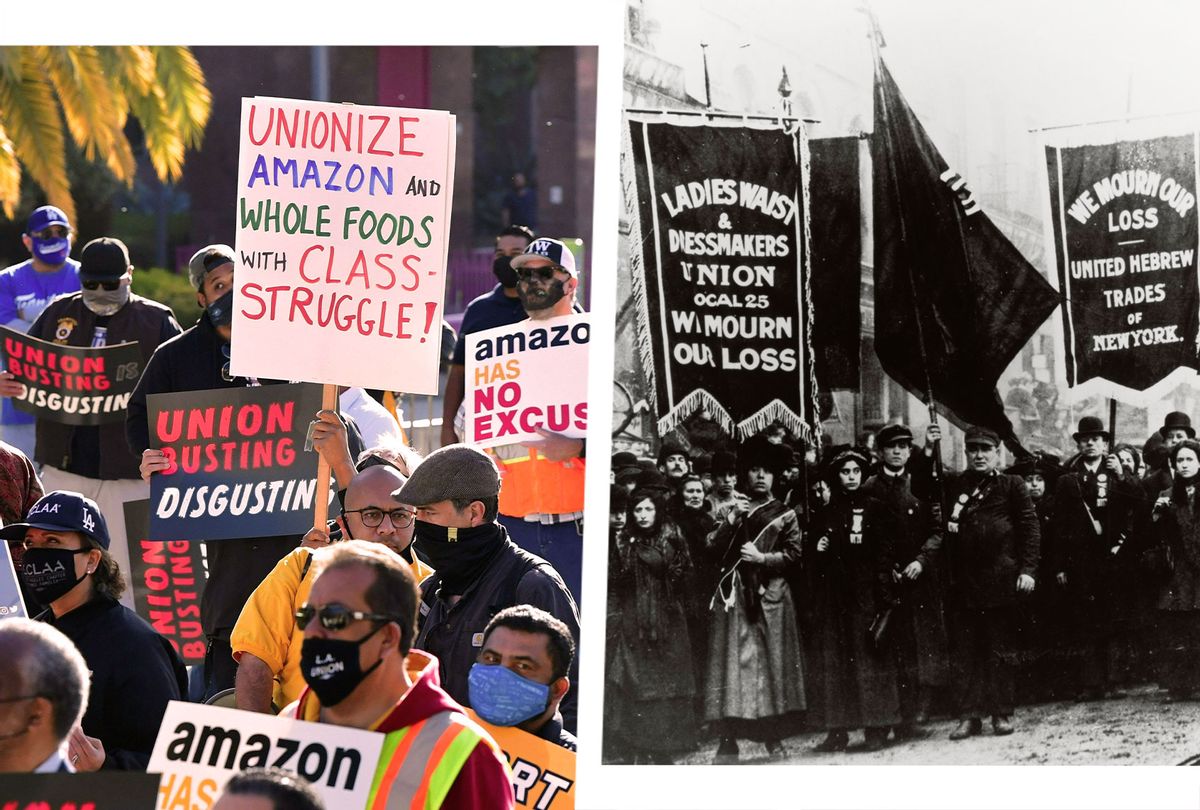 Workers and organizers are pushing for what would be one of the biggest victories for labor in the United States over the past few decades if successful in the first Amazon wharehouse union election in Bessemer, Alabama, where worker's ballots must reach the regional office of the National Labor Relations Board by March 29 to be counted. | Demonstrators mourn for the deaths of victims of the Triangle Shirtwaist Factory fire, New York, New York, 1911. (Photo illustration by Salon/Getty Images)
--

On this day 110 years ago, 146 garment workers, including 123 mostly young immigrant women, died in the Triangle Shirtwaist Factory fire in lower Manhattan. Many of these women were forced to jumped from several stories to the pavement below because the intensely anti-union sweat shop owners had insisted on keeping exits locked and only one of four elevators were operating.

These women were paid $15 a week and worked at least 12 hours a day, seven days a week. The owners of the sweatshop were outliers, who refused to acquiesce to the workers' demands that were made during the city-wide strike by the International Ladies Garment Workers Union for better pay and a more humane work schedule.

The very public grotesque death on a city sidewalk of so many women, filled with all of the potentiality of youth, pricked the conscience of New York City and helped spark a national movement for unions, labor rights and worker safety that would, a generation later, be foundational to President Franklin Delano Roosevelt's New Deal.

The manslaughter trial of sweatshop owners Max Blanck and Isaac Harris, a.k.a. the "Shirtwaist Kings", resulted in their acquittal. Yet they were forever condemned in the court of public opinion, which was informed by the disclosure that they had previously had fires at the Triangle site and their Diamond Waist Company plant had also burned twice.

In the years since, the annual commemoration in lower Manhattan of this horrible day has served as a solemn occasion to remember all of the lives of workers lost the previous year as a consequence of corporate greed and of government complicity in the form of lax or non-existent regulation on the commercial interests that rent our politics to this very day.

And in the intervening years, these gatherings have helped to spotlight just how, with the decline of the union movement, we have seen a dramatic increase in the precarity of employment itself. Union activists, alongside the descendants of the victims from the 1911 fire, annually commemorate the names of the Triangle victims — and, in recent years, also reference the dozens of undocumented immigrants that have died at non-union construction work sites without basic protections like workers' compensation or disability and death benefits.

This year, the Triangle Fire Coalition and the New York Central Labor Council of the AFL-CIO annual memorial will be a virtual celebration to highlight the plight of the nation's millions of essential workers and their families who have been infected with COVID-19 and have died by the thousands from the deadly virus.

And as with the death of the Triangle workers, the culpability for the death toll is to be found at the confluence of corporations and the government — who turned a willful blind eye to the spread of the highly contagious and deadly virus in places like the nation's meat plants at the beginning of the pandemic. It was there that the Trump administration, in complete supplication to the meat processors, subverted the efforts of unions and local public health officials to stop the spread of the virus.

Indeed, thousands of workers have suffered nationwide due to a lack of adequate workplace protections during the pandemic. In nearly all cases, having a union could have helped.

Hence, pandemic-related labor strife is happening all around the country. In Amazon's Bessemer Alabama distribution plant, the multinational behemoth is doing all it can to defeat the union organizing drive aimed to enlist 6,000 mostly Black workers into the Retail, Wholesale and Department Store Union (RWDSU).

At a March 22 Moral Monday celebration, Rev. Dr. William Barber took Amazon's Jeff Bezos to task for trying to use his commitment of gifting $10 million to African American causes "to show he is concerned about Black Lives Matter" while seeking to derail Amazon workers bid for collective bargaining.

"I am going to say today that Amazon doesn't care about Black Lives Matter if you give chump change to Black organizations but then block the labor and union rights for workers right here in Bessemer," Barber preached. "Don't play with us like that. If they are any national organizations taking money from Jeff Bezos they ought to give it back until he stops the attack on these workers."

As 20,000 Amazon workers fell sick with COVID-19, some of whom died Bezos's personal wealth "skyrocketed from $113 billion to $189 billion during COVID," Barber said. The co-leader of the national Poor People's Campaign observed that spike in wealth happened as eight million more Americans fell into poverty during the pandemic, which continues to pose significant occupational health risks for essential workers that are not getting hazard pay.

Amazon's labor pains extend to New York state, too. Last month, New York State Attorney General Letitia James sued Amazon for "repeatedly and persistently" failing "to comply with its obligation to institute reasonable and adequate measures to protect its workers from the spread of the virus in its New York City facilities" in Staten Island and in Queens.

New York's attorney general alleged that Amazon's "flagrant disregard for health and safety requirements... threatened serious illness and grave harm to the thousands of workers in these facilities" and posed a "continued substantial and specific danger to the public health."

James also called out the company for allegedly retaliating against their employees who had raised concerns about how Amazon was addressing the considerable occupational health challenges posed by the pandemic.

Amazon has maintained in its court filings  that its COVID precautions "far exceeded" what New York State required and that it had passed a March 30 surprise inspection by New York City officials. Back in the fall it reported that just 1.44 percent of its workforce had been infected by the virus, 42 percent lower than the rate of spread detected in the general population.

With over 30 million Americans infected by COVID-19, we can project, depending on the research study one examines, that as many as one in three Americans will be left with lingering health effects from COVID of varying severity. That's millions of people, many of whom will have contracted the virus while working. Yet right now, most states do not provide a Workers Compensation presumption from COVID meaning that employers can, and already have, fight the  claims by disabled workers.

One of the problems with today's pandemic-inspired labor movement is that no one really knows how many workers have died or been infected on-the-job. We have hints here and there from reporting projects: for instance, thanks to a joint reporting project by the Guardian and Kaiser Health News, we do know that more than 3,500 health care workers who were under 60 years of age died from COVID, with 700 from just New Jersey and New York alone.

We also know that hundreds of law enforcement officers have died from COVID-19, making it the leading cause of death for that workforce.

But certainly, the COVID disease and death toll for health care workers and first responders is only a partial picture of the bigger picture of the occupational health crisis that has ensnared the entire essential workforce.

Some legislators are working to change that. New York State Senator Brad Hoylman lives in lower Manhattan just three blocks away from the site of the Triangle Fire and not far from the World Trade Center. Recently, Hoylman has introduced state legislation to create a voluntary COVID Health Registry, similar to the one that was created for the 9/11 WTC first responders and survivors. It was that registry which helped both state and federal policy makers gauge the public health implications from the toxic exposure as they became evident years later.

"We don't know what the long-term effects of COVID are yet," Hoylman said. "Yet, we know there are lingering side effects from respiratory conditions to psychotic breakdowns and that is all just coming to light. Hopefully, this is not a lifetime disability, but there are some worrisome signs that suggest the impact could be long term for as many as ten percent or more of COVID cases."

New York state is one of at least thirty states that don't not have a workers compensation guarantee for essential workers who contracted the deadly virus on their job. In these states,  workers that are sidelined can be left unemployed without the financial resources to support themselves while they convalesce.

Similarly difficult to account for are undocumented workers, many of whom kept working amid the pandemic.

"I am hopeful that this kind [the health registry] of evidence of long-term health consequences from COVID can help change that," he said.