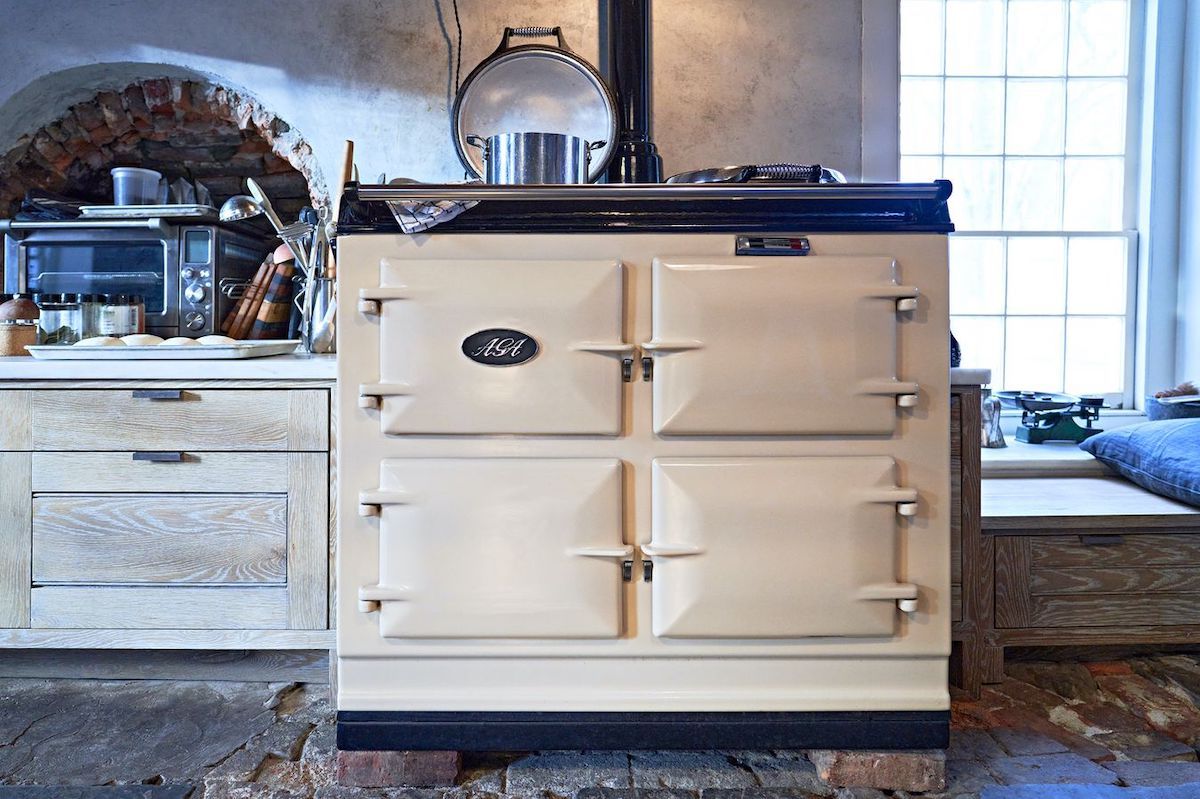 I had always assumed the origins of the AGA stove were uniquely British, but this stalwart appliance was actually created about a century ago by blind Swedish physicist Gustaf Dalén, a Nobel Laureate. It took Dalén and his company seven years of prototyping to develop the AGA, and it was purpose-built as a solution to his wife Elma's frustration at having to constantly stoke their cookstove and closely watch over the food she prepared.

At first glance, the AGA, while not without its throwback charm, may look like a curious relic of a bygone era to the uninitiated eye — an intimidating enameled hunk of no-thank-you, salvaged from a locomotive museum. Or something passed on from an old house's original tenants, left in place, too heavy to extract or dismantle. Certainly, it's not something one would intentionally purchase today, and have placed in their contemporary kitchen, right? Well, guess again. The desire and considerable expense put forth to own and install this venerable tool continues seemingly unabated to this day. Never mind that it also demands users recalibrate their preconceptions of everyday food preparation techniques.

As an American, I cannot adequately describe the passionate following of generations of British chefs who adore the AGA. One famous chef is Fergus Henderson, who uses an AGA in his London eatery St. John's to turn out an array of delicious nose-to-tail dishes.

Due to its unique design, the AGA stays on all the time, and has no knobs or settings to speak of. It is insulated, and makes surprisingly efficient use of a single, internal heating unit that distributes consistent yet varied temperatures to its several cooking zones simultaneously. 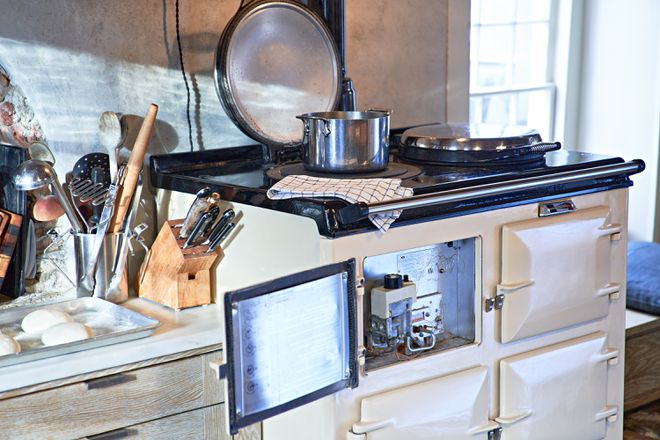 The basic components of a traditional three-oven AGA are as follows: The top two silver-domed surfaces (that resemble a steampunk DJ setup) are in fact insulated, hinged covers that lift to expose raw iron "burners" for pots, kettles, and such. Depending on the side of choice, and proximity to the center, they can simmer, boil, braise, or char. It's a common practice to use the palpable heat, even when the covers are closed, to dry kitchen towels or press cloth napkins. 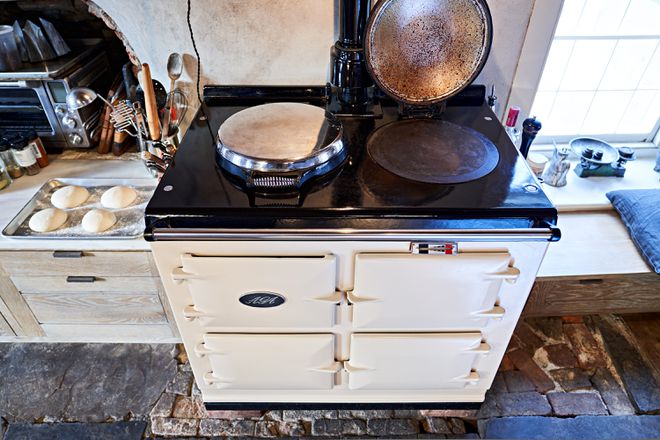 Facing front are multiple compartment doors, with the upper left providing access to the burner unit, which in this case is gas-fed. The remaining three compartments are for baking, roasting, and simmering, in order of descending temperatures. The simmering oven compartment is a perfect spot for taking the chill off serving dishes before serving a meal. A clothes-drying rack — or even a chair with a damp shirt slung over the back — is another common companion to the AGA. The cast-iron construction radiates a gentle, welcoming warmth, especially vital in the cold and damp seasons.

In an attempt to convey the adaptation necessary to truly get on an AGA's wavelength, let's say it's more like a musical instrument than any adjustable stove experience you've become familiar with. One needs to tune recipes to an AGA, and patiently practice with it in order to be rewarded with the kind of harmony that will make your recipes truly sing.

When I asked her to detail why she covets the classic AGA cooker, renowned British food writer and Food52 contributor Elaine Lemm said, "For me, it's the versatility. You learn to work with the AGA, get to know its sweet spots and its hot spots. You can leave your kettle simmering over there and you can pull that pot a bit closer and you'll get a bit more simmer on it. It's alive. When I was younger I perhaps didn't have the time for it in the same way, but now it's just lovely and very soulful, and brings a whole different feeling to the food."

When asked about the stove's learning curve, Lemm offered this anecdote:

"My very best friends had an AGA, and this one ran on solid fuel, so it had to be kept 'alive.' I went to house-sit for them one Christmas, and forgot to feed the AGA, which sent out this beautiful warmth all the time, whether you were cooking or not. And so in this watermill house they had, which was down in a valley I didn't realize was as damp as it was until I let the AGA go out, it took a week to get it going again. I was not very popular. They'd had this AGA alight for about 10 years, and I killed it in four days."

My first magical encounter with the enameled iron beast at the center of this story was while visiting a friend's country home in the Hudson Valley, in New York. The kitchen is the usual gathering place, with generous overhead lamps that illuminate a long central table made from lengths of the house's original flooring. This home has truly old bones, dating from about 1750, but has been lovingly renovated to integrate all the conveniences of modernity you could desire. It strikes a charming balance between historic preservation and polished fit and finish.

Contemporary appliances, cabinetry, counters, and walls coexist with the house's original stone slabs and ancient pine-plank flooring. A perfect, eye-comforting mix, and yet the undeniable draw of the room is their three-oven AGA. It's built like a tank, and weighs roughly the same as a grand piano. 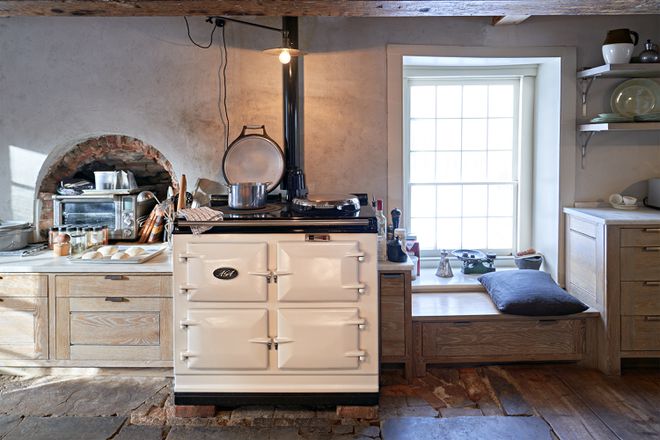 While visiting with the "parents" of this cream-colored beauty, I learned that their AGA is a beloved member of the family. I watched them make sourdough naan using only the top-covered hot plates as makeshift tandoor ovens, and was excited to see multiple balls of dough at the ready.

After a quick rolling out, the dough went straight onto the right-hand cook surface, and the immediate aroma of fresh-baked bread was intoxicating. After a brief bubbling under the covered right burner, my host deftly flipped the naan over to the left-hand burner with a spatula for a speedy char and final flip to crisp both sides. Watching his process was like witnessing a culinary magic trick, puff of steamy smoke and all, right before my eyes. This was no casual first attempt — his ease spoke volumes of the practice behind a maestro's symbiotic mastery of his AGA. All happened in less than a minute, and the resulting flatbread was sprinkled with olive oil, cumin, and salt, then chopped into triangles. 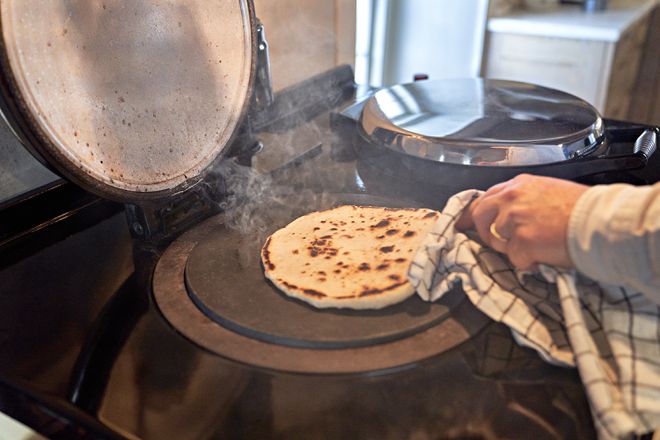 As quickly as my host had made the naan appear, it disappeared into my hungry gullet. When an impromptu dinner invitation was offered, I gladly accepted the opportunity to sample more of my generous friend's AGA creations. If you are lucky enough to know an AGA chef, I encourage you to embrace them dearly.