Can a "true" conservatism be redeemed after Trump? Maybe — if it embraces liberalism

Conservative ideas still have value — but conservative politics has gone insane. Maybe there's a way out 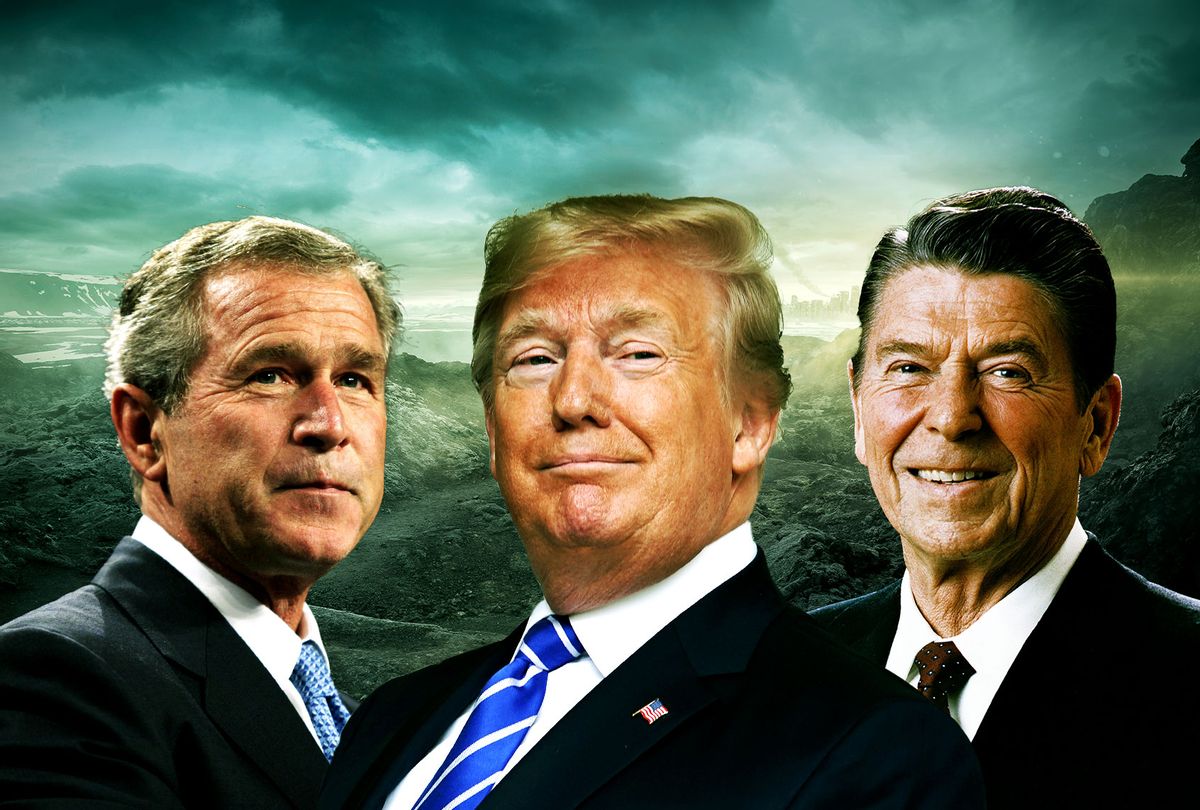 It's not just the bedraggled band of "never Trump" Republican refugees on MSNBC and elsewhere who are endlessly vexed. For four long years, the whole mainstream media sphere has been laced with talk about the need for a healthy GOP, a vibrant two-party system, and a return to true conservative values. Critiques of that system, like Lee Drutman's "Breaking the Two-Party Doom Loop," only get a fraction of the attention devoted to these themes. But even more absent is any discussion of what a responsible conservatism might actually look like.

Conservatives who long for the days of George W. Bush or Ronald Reagan overlook one obvious fact: Their legacies helped get us into the current fix they — and we — find ourselves in. Both those presidents nourished the destructive, irrationalist forces that have come to dominate with Donald Trump, and both implemented ill-conceived policies that only made life worse: increasing inequality, eroding social stability and intensifying the ethos of cutthroat competition.

I'm not out to damn conservatism unreservedly, just because I'm quite blunt about its disastrous political failures. But conservative politics are not the whole story. Conservative temperament and character traits are part of human nature, as the field of political psychology has firmly established. And they can be positive qualities, as Dannagal Young argues in "Irony and Outrage," for example.

"Conservatives are just more skilled at efficient quick responses to threats," Young told me when I interviewed her. "These are people who will run into the fire. These are people who are so necessary for our society to survive and to thrive." But the outrage industry "exploits what are really to be thought of as gifts," mobilizing them on hate, which is "dangerous for democratic health."

By failing to distinguish between conservative temperament and conservative ideology — between conservative masses and conservative elites — we miss perhaps the most important aspect of the story of how we ended up with Trump: American conservatism has been profoundly irresponsible. It has repeatedly failed to deliver on its promises — its trickle-down promises to promote prosperity, its culture war promises to vanquish evil at home and turn back time, its foreign policy promises to vanquish evil abroad — and it never takes responsibility for those failures. And the people most hurt by this unending history of failure are ordinary Americans with conservative temperaments, whose faith in their leaders has repeatedly been betrayed.

The end result is obvious, even if many conservatives still insist Donald Trump isn't their creation. They made their own media alternative universe because they couldn't stand the real world, and out he came. They demonized the word "liberal" for 50 years, and only now are some of them wailing over the existential threat to liberal democracy. I want to trust the never-Trump conservatives. I want to see a healthy conservatism in place of a deeply malignant one, a conservatism that does not betray the ordinary people whose instincts and desires it appeals to. But the odds are very much against them in the short run.

A new poll identifying five "tribes" within Republican voters finds that only 15% qualify as "never Trump" Republicans. His job approval among the four other tribes is 97% to 100% — even among "post-Trump" Republicans who think it's time for new leadership. What's more, the two tribes most supportive of Trump also have the largest proportion who self-identify as "very conservative," while the "never Trump" tribe has the least. So conservatives who yearn to look toward the future need to think long and hard about what a healthy conservatism could look like, and then start building it.

Fortunately, I've got some ideas for them — ideas I first laid out almost 15 years ago, when Republicans lost control of the House in the wake of multiple Bush administration failures: the Iraq war, Hurricane Katrina, the botched attempt to privatize Social Security, and more. Bush was not a "true conservative," some began to argue as his popularity declined. He was a "globalist," some added. But what was "true" conservatism, then? My answer was simple: It was liberalism. If you want the ends that conservatives claim to desire, you get them through liberal means:

I could add more to that list today, to bring it more fully up to date. But the core theme remains the same: You deliver the most legitimate desiderata of conservatism by embracing the practices, policies and ideals of liberalism. You want law enforcement respected? Then instead of defending racist police practices — up to and including wanton murder — reform law enforcement to act respectfully toward all people. Embrace the accountability that activists have long been calling for.

My argument here is not exactly that such reforms are the answer — I incline much closer to the abolitionist perspective. I'm simply highlighting what a sensible conservative approach ought to look like, if it were serious about achieving what conservatives themselves claim to care about.

Consider what we have instead: knee-jerk defense of police violence under the banner that "Blue Lives Matter," paired with defense of an insurrection that left three police dead and hundreds wounded. That's where the majority of self-described "very conservative" Republicans are today. Incoherence is a feature, not a bug, of actually existing conservatism.

So, is a coherent conservatism possible? One whose means can plausibly achieve its desired ends, even if those means be liberal? It should be. After all, conservatives have often claimed to be pragmatic and non-ideological, in contrast to liberals and those farther left. Not all conservatives have claimed this, of course, but enough have to make it clearly part of their tradition. And besides, when they have drawn ideological lines in the past, they've invariably redrawn them when they've proven untenable. The cases of slavery, segregation and the civic exclusion of women are the most obvious American examples that come to mind.

What stands in the way, for American conservatives, is their long history of demonizing liberals. How can they embrace what they have repeatedly demonized in a manner so central to defining themselves? Demonization and scapegoating have long been key to their successful struggles for political power, and tie into the basic nature of conservatism — the "efficient quick responses to threats" that Young spoke of. But they do so by misleading, just as logical fallacies mislead us by mimicking valid heuristics. (The post hoc "rooster" fallacy, for example, mimics the valid heuristic that causes precede effects.)

This misleading reaches an apotheosis in QAnon conspiracy theory. The "Infowars GOP" tribe, which has the strongest believers in QAnon theories (68% of that group subscribe to four or more such theories), also has the highest percentage who self-describe as "very conservative" (at 72%, compared to a GOP average of 49%). What is the essence of QAnon? That liberals are led by a hidden cabal of Satan-worshipping, cannibal pedophiles running a global child sex-trafficking ring, and that Donald Trump will someday defeat them in one fell swoop.

This is what happens when "efficient quick responses to threats" go haywire, just as they once did in Salem Village. Those responses should be "thought of as gifts," as Young put it, but they have been intentionally misdirected for years, if not decades. Can conservatism ever rid itself of this legacy? Color me skeptical, to say the least. It's not a question of individual attitudes — the "conspiracist dimension" that Joe Uscinski has found to be fairly uniform across the political spectrum — it's a question of conservative culture and the elites who shape it: the Murdochs, Mercers, Bradleys and Kochs who fund it, and the figures they chose to lift up.

It could be argued that liberals demonize these conservative leaders as well, but the people who are most intimately hurt by them are the conservative masses whose basic instincts and aspirations they so ruthlessly betray. The ends they hold out — preserving social order, local integrity, historical continuity, respect for authority, high levels of personal morality and religion's place as a polestar in people's lives — cannot be met by the means they insist on. In each instance, as I pointed out above, the exact opposite of what they insist on is required. "Liberal" means alone can deliver these desired conservative ends.

The good news for conservatives is that they don't actually have to become liberals to enjoy these liberal fruits, at least not in terms of temperament. But they do have to stop mindlessly and reflexively battling every aspect of liberal thought and ideology, and they have to be willing to claim those fruits as their own. There will still be — and will always be — temperamental differences between liberals and conservatives. There are temperamental gifts on both sides, as well as in between. But there's a common liberal cultural heritage that makes it pragmatically possible for both sides to achieve what's most important to them. Conservatives need to claim that heritage and own it for themselves.

Maybe I'm wrong and there's some basis on which a non-pathological form of conservatism could be built. If conservatives think they can do a better job of delivering the most legitimate desiderata of conservatism, then it's on them to explain how, and to show that it can actually work. That's what a responsible conservatism would do, if indeed it could exist. To do that, it will have to embrace what it has always demonized — or to put this in terms conservatives can relate to, it will have to man up, and put away childish things.