Neil and Ann Corkery have a mission: Load up the judicial branch with right-wing Catholics. It's definitely working 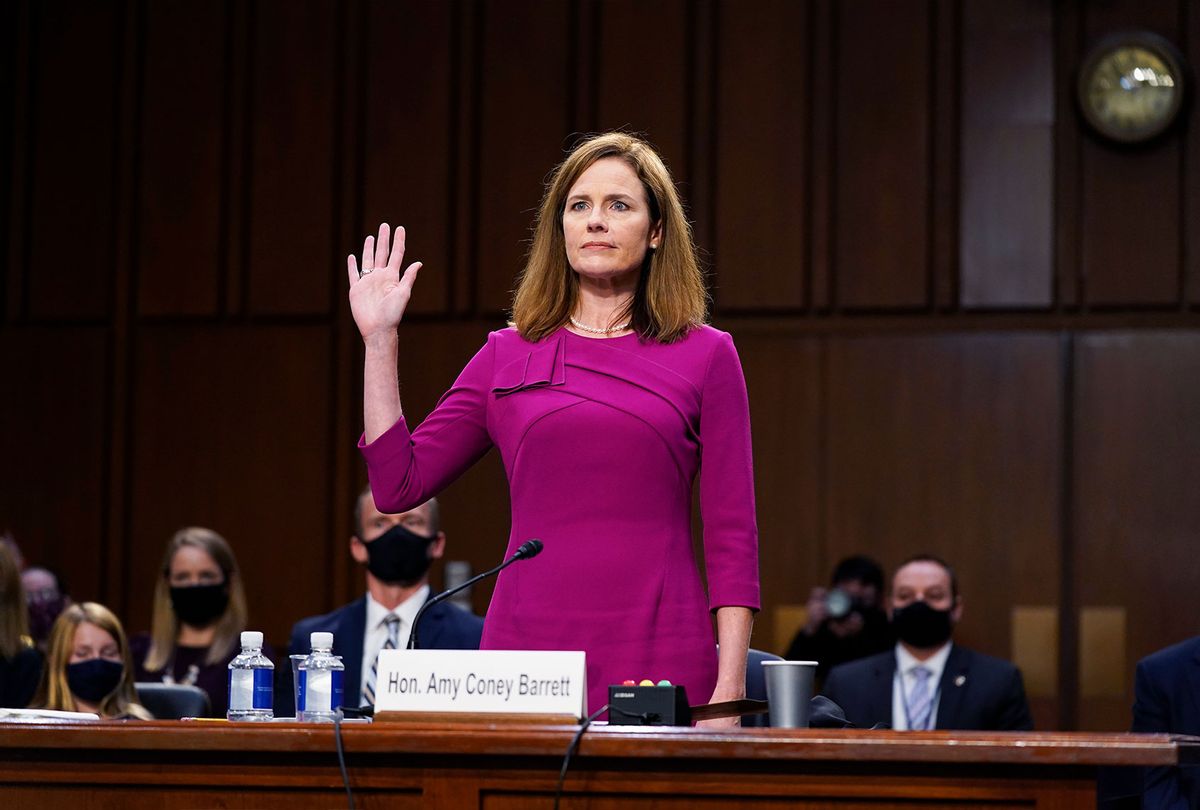 When future Supreme Court Justice Amy Coney Barrett was nominated to a federal appeals court in 2017, Sen. Dianne Feinstein, D-Calif., at the time ranking member of the Senate Judiciary Committee, expressed concern over Barrett's religious affiliation as a pious Roman Catholic identified with her church's most conservative elements. "I think whatever a religion is, it has its own dogma," Feinstein said, addressing Barrett directly. "In your case, professor, when you read your speeches, the conclusion one draws is that the dogma lives loudly within you."

Feinstein was widely criticized for those remarks, which may not have been artfully phrased. Barrett was of course confirmed to that appellate court, and then confirmed — if just barely — to the Supreme Court three years later, solidifying a 6-3 conservative majority. She also became at least the sixth Catholic among the nine justices currently sitting on the court. Like Justices Brett Kavanaugh and Neil Gorsuch, former President Trump's previous nominees, Barrett is visibly someone who understands the law through a religious and specifically Christian lens. (Gorsuch's religious affiliation is not entirely clear: He was raised Catholic but has attended Episcopal churches for most of his adult life. But even without counting him, the court is disproportionately Catholic: Barrett, Kavanaugh, Sonia Sotomayor, Samuel Alito, Clarence Thomas and Chief Justice John Roberts.)

The three new justices of the Trump era have been accused of blatant disregard for the separation of church and state. But the fact that they arrived at such positions of power is perhaps less concerning than exactly how they did. As with so much in conservative politics, their ascension was facilitated by a byzantine web of right-wing dark money, operating with little to no accountability.

Meet Neil and Ann Corkery, a pair of veteran Republican operatives who have cultivated a robust network of conservative and Catholic-affiliated nonprofits, charities and funds notable for their near-total opacity. For more than a decade, the Corkerys have leveraged this network to prop up conservative judicial nominees, most of whom have been devout Catholics. Robert Maguire, research director at Citizens for Responsibility and Ethics in Washington (CREW), told Salon that "while most Americans wouldn't recognize their names," the Corkerys "have been the overseers of massive amounts of money that have gone into federal judicial races."

"They have the discipline to not talk," Maguire explained, acknowledging the dearth of reporting on the duo. "They don't have social media accounts. They don't give public speeches. They've done a really good job of limiting the amount of public information on them."

We do, however, know bits and pieces. It's likely that the Corkery empire started around 2008, when Ann Corkery, a partner at the Washington law firm Stein Mitchell Cipollone Beato & Missner, established the now defunct Wellspring Committee, a 501(c)(4) organization that took in tens of millions of dollars, if not hundreds, of millions, from undisclosed donors for upwards of a decade. Wellspring was founded with the help of Charles and David Koch, and raised its first $10 million seedling donation from attendees at a Koch donor seminar.

In a 2013 NPR interview, Wellspring's lawyer promoted the notion that the organization had an innocuous-sounding goal, of assisting "other like-minded organizations in promoting free market policies and principles." She maintained that Wellspring was a "social welfare organization" that shepherded donors' money into other social welfare groups, much like an investment fund.

Wellspring could pass itself off in those terms thanks to U.S. tax law, which a decade ago mandated that organizations of that type could devote no more than 49 percent of their expenditures to political activity. What distinguished "political activity" from "social welfare" was (and continues to be) an open question, however. This loophole potentially gave Wellspring free rein to donate unlimited amounts of money to other social welfare groups, even if those groups had explicit political goals.

The Corkerys' political influence, as Maguire pointed out, has a highly specific orientation rooted in religious faith. "When you look at the way money has flowed through the groups [Wellspring] is affiliated with," he explained, "you see a long history of supporting groups that fought against marriage equality and anti-abortion."

In 1990, the Corkerys gave an interview to the South Florida Sun Sentinel describing themselves as members of Opus Dei, an enigmatic and highly secretive society within the Catholic Church. According to a 2013 investigative report from the liberal group Catholics for Choice, members of Opus Dei "vehemently oppose legislation that allows divorce or civil marriages, as well as homosexuality and contraception." Critics have also alleged that the group has internally supported various authoritarian world leaders.

In 2008 alone, Wellspring gave the National Right to Life Committee and Susan B. Anthony List (also an anti-abortion advocacy organization) $542,000 and $753,000, respectively. It has also made donations to Americans for Prosperity, the American Action Network and Americans for Job Security, all of which have been big spenders on conservative political ads. AJS, for instance, spent some $8 million worth of ads opposing the re-election of Barack Obama in 2012, when the debate around marriage equality was at fever pitch. AFP spent $122 million on television ads in the same vein.

Other beneficiaries of Wellspring include People for United Privacy, a foundation that fights against calls for campaign finance disclosure; the Catholic Association Foundation, a nonprofit that promotes Catholic causes; and the Federalist Society, the well-known "constitutional conservative" group run by Leonard Leo, a fellow devout Catholic who reportedly belongs to the Knights of Malta, a secretive Catholic order dating to the Middle Ages that operates as a "quasi-independent sovereign nation."

According to the Center for Responsive Politics, in every year since Wellspring's inception, it has given millions of dollars to the Judicial Crisis Network, a 501(c)(4) nonprofit established in 2005. JCN, which has in the past been interchangeably overseen by Ann and Neil Corkery, is known for promoting judicial appointments on a state and federal level. JCN did not respond to a request to clarify its financial activity, but a 2019 report from Open Secrets shows that Wellspring accounted for over 90 percent of the group's funding.

In 2016, Wellspring reported donating about $23.5 million to JCN, and tacked on another $15 million in 2017. It's unclear exactly when in those years these donations occurred, but they do correlate closely with two events in which the group had a clear interest. Merrick Garland (then a federal judge, and now President Biden's attorney general) was nominated to the Supreme Court by President Obama in March of 2016. His nomination was never considered by the Senate, and of course Justice Gorsuch was nominated by Trump less than a year later, in January 2017. JCN reportedly spent $7 million on ad campaigns attacking Garland, and $10 million on campaigns aimed at promoting Gorsuch.

The JCN is now run by Carrie Severino, who once served as a law clerk for Justice Clarence Thomas, perhaps the Suprem Court's most conservative member (and a devout Catholic). She forms half of what the New York Times has described as "Washington's conservative power couple" with her husband, Roger Severino, who led the Office of Civil Rights at the Department of Health and Human Services under Trump. Roger has described the couple as "serious Catholics" driven by their "proudly pro-life" beliefs. Carrie is more careful, telling the Times she did not want to categorize her religious beliefs: "I don't think it is relevant." Roger Severino has spent much of his political career working on a range of causes dear to the religious right: opposing marriage equality, reproductive rights and equality of health care access for the LGBTQ+ community.

In 2016, Media Matters found that JCN consisted of just two employees, despite the enormous amounts of money that flow through the organization on a regular basis. A recent glance at the nonprofit's website suggests that Carrie Severino is now the sole employee. She did not respond to Salon's request for comment.

JCN's website lays out an artfully worded mission statement: "We support legislative and legal efforts which oppose attempts to undermine the rule of law ... or bias the legal system on behalf of politically favored groups or individuals." Arguably, the group's enthusiastic deployment of money from undisclosed donors to promote the nominations of overtly religious and partisan nominees suggests a degree of bias toward "politically favored" groups and individuals.

In 2016, JCN launched a smear campaign against Merrick Garland, depicting a judge almost universally depicted as a moderate as a "liberal extremist" on gun policy. These ads alleged that Garland had upheld an "illegal Clinton-era regulation" that would compel lawmakers to create a federal registry of all gun owners. In fact, Garland had no clear history on gun policy at the time and even Charles J. Cooper, an outside attorney for the NRA, argued that Garland "possesse[d] the qualities of a fine judge" and "would comport himself on the bench with dignity and fairness." When Garland was considered for an earlier Supreme Court vacancy in 2010 (which ultimately went to Justice Elena Kagan), Carrie Severino told the Washington Post piece that of the candidates Obama might choose, Garland was the "best scenario we could hope for."

Unsurprisingly, JCN went to bat for Brett Kavanaugh in a big way after his 2018 nomination. While public support for Kavanaugh gradually declined as multiple women from his past came forward to accuse the judge of sexual misconduct or assault, anonymous donors pumped $30 million into JCN, which pledged at least a $10 million ad campaign designed to convince the public of Kavanaugh's "impeccable character, extraordinary qualifications, independence, and fairness." Kavanaugh's uneven and highly emotional performance at his confirmation hearings sowed doubt in many people's minds about those qualities, but JCN left the financial spigot on until he was finally confirmed in October.

Barrett's nomination was bankrolled by the Corkerys as well. Barrett, a devout Catholic and a former member of a Catholic community called People of Praise — which has been accused of subjecting female members to "intense subjugation … by community leaders" — was the subject of a $10 million JNC ad campaign launched in October of 2020. JCN's first ad argued that confirming Barrett would be "following precedent," since Justices Ruth Bader Ginsburg and Sandra Day O'Connor were confirmed expeditiously and with unanimous Senate support. In fact, Barrett wound up as the first justice in 151 years confirmed with zero votes from the minority party in the Senate.

Many of JCN's ad campaigns present themselves as being "grassroots" or driven by "popular demand." For example, JCN launched a $2.2 million ad blitz just three days after Justice Ginsburg's death, framing it as a "grassroots mobilization campaign."

Maguire told Salon that this branding is blatantly false. "Insofar as the groups have tried to portray themselves as grassroots or speaking for the American people," he said, "the donations show just what a farce that this is. These are entities that are dependent entirely on a small handful of wealthy, anonymous donors. That's not what nonprofits were intended to be."

Having secured both a conservative and Catholic majority on the Supreme Court, Ann and Neil Corkery may be looking elsewhere. Most recently, they have taken aim at Vanita Gupta, Biden's nominee for associate attorney general, whose confirmation vote in the Senate is likely to be extremely close. Until now, the Corkerys haven't evinced much interest in executive branch nominees. Clearly there is room for growth.

CORRECTION: An earlier version of this story incorrectly reported that Sen. Dianne Feinstein's comments about Amy Coney Barrett's religious faith occurred during Barrett's Supreme Court confirmation hearings. In fact they occurred in 2017, when Barrett was seeking confirmation to a federal appeals court. The story has been updated.