How much ham per person is just right?

Consider the leftovers (and sides!) 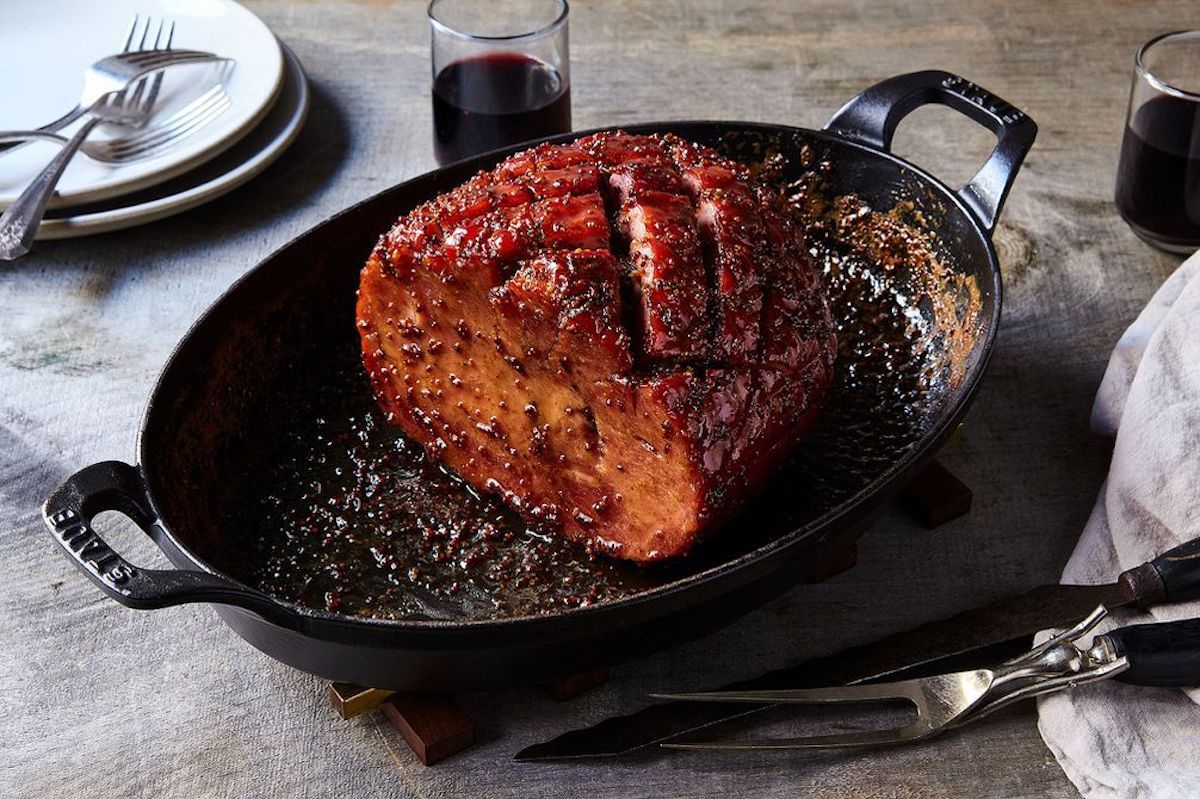 When it comes to planning the ham for Easter dinner (or any meal where a large-format pork will be the hero), a number of questions present themselves almost immediately: Where should I buy the ham? What type of ham should I buy? Bone-in or boneless? How much ham per person? and so on. Odds are your holiday meal will be a bit smaller this year than it has been in years past, but these questions remain just as important when serving your household of three as they were when you were hosting 20. So, let's break it down.

How much ham per person?

The best rule of thumb for ham is to plan about 1/2 pound per person when picking a bone-in ham (it's heavier) and 1/3 pound if boneless. Look, at the end of the day, some people will eat more than expected, some will eat less — it'll even out. If you're making a lot of side dishes, err on the smaller side; if you texted your roommates "ham party at 3 p.m. on Sunday," consider buying more.

Once you've decided how many people you're serving and have a vague idea of how much ham you want, head to the store. Consider whether you want to buy a fresh ham (totally raw, with pale pink flesh), cured (brined dry or wet, with pinker flesh; might be ready to eat or may require some cooking — they'll be marked), or smoked and cured (same as a cured ham, with the addition of a smoky flavor). Hams can be bought whole, halved, or spiral-cut (meaning presliced), and either boneless or bone-in; bone-in and smoked tends to have the most flavor. Plus, you can amp up all that hammy goodness with your own glaze.

To cook or not to cook

Some cured hams, like prosciutto you'd put on a sandwich, are edible the moment you take them out of the package. Same goes for some of the big guys, too. For example, meat manufacturer D'Artagnan has a smoked, bone-in ham half that's fully cooked and "can be served cold, at room temperature, or heated, with or without glaze." (Though I'd still recommend foil-wrapping the ham and heating it up in the oven at 300°F, until it registers 140°F on a thermometer.) For two winning recipes, read on.

Okay, so how the heck do I cook ham?

I'll be honest: I think sliced ham on a plate is fine, but it won't tear me away from the appetizers. A ham sandwich bar, on the other hand, absolutely will. Lay out potato buns, pickles, all the mustards you can find, mayo, Swiss cheese, apricot or strawberry jam (yes, jam! on ham! try it!), and a pile of sliced ham for one of the best sandwiches this side of a PB&J.

You probably can't eat a whole ham, but why make a small portion if going through the whole ordeal? Considering that there are so many salty, fatty, porky recipes for leftover ham, you really shouldn't not do up the large-format meat.