Cyber Ninjas is owned by Doug Logan, an active proponent of the "Stop the Steal" movement 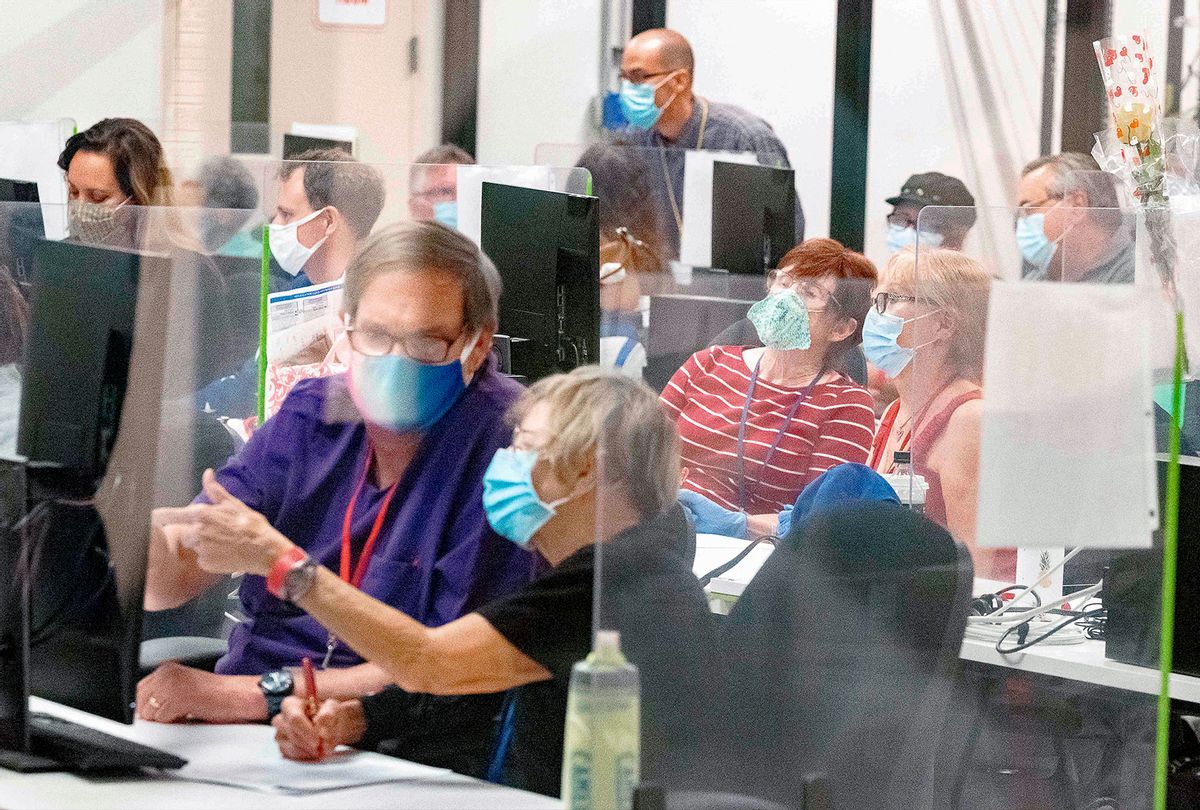 Poll workers count ballots inside the Maricopa County Election Department in Phoenix, Arizona on November 5, 2020 - Former vice president Joe Biden, making his third run at the White House, was tantalizingly close to victory on Thursday as President Donald Trump sought to stave off defeat with scattershot legal challenges and his campaign insisted he would be reelected. (OLIVIER TOURON/AFP via Getty Images)
--

The owner of a Florida-based tech company, who promoted baseless claims about widespread election fraud, has been charged by the Arizona state Senate with heading a recount of the 2.1 million general election votes in Maricopa County.

The company, Cyber Ninjas, will be leading three other firms – Wake Technology Services, Digital Discovery and CyFIR – to carry out a comprehensive audit and full hand recount. According to the firm's website, it "specializes in all areas of application security, ranging from your traditional web application to mobile or thick client applications. Within these disciplines, we offer ethical hacking, training and general consulting."

The Arizona Senate stated in a Wednesday press release that "the scope of work will include, but is not limited to, scanning all the ballots, a full manual recount, auditing the registration and votes cast, the vote counts and the electronic voting system."

Cyber Ninjas is owned by Doug Logan, an active proponent of the "Stop the Steal" movement.

Back in January, Logan was revealed to be an expert witness in a lawsuit filed by an Arizona man alleging systematic fraud in Antrim County, Mich., a claim pushed as a result of a brief glitch in the state's ballot-counting software that temporarily switched vote totals between the former and current president.

In the month prior, Logan spread claims of election fraud on social media. Though he deleted his account in January, archives show a pattern of pushing baseless election conspiracies.

"I'm tired of hearing people say there was no fraud. It happened, it's real, and people better get wise fast," read a post he retweeted on Dec. 31.

"The parallels between the statistical analysis of Venezuela and this year's election are astonishing," Logan also wrote in a December post.

Another post he shared in that same month said, "With all due respect, if you can't see the blatant cheating, [sic] malfeasence and outright voter fraud, then you are ignorant or lying."

According to AZ Mirror, Logan also retweeted posts by Ron Watkins, a known QAnon conspiracy theorist who was believed by many to be behind the Q account. Watkins alleged that Trump may have 200,000 more votes than was reported in the general election.

Following the election, Logan cast doubt over the structural integrity of Dominion, a voting technology firm used to count ballots in the 2020 election, and retweeted a comment written by attorney Sideny Powell, who filed several lawsuits challenging the results in Arizona and is currently being sued by Dominion for defamation.

Senate President Karen Fann, a Republican who selected Logan to lead the audit, has not commented on any concerns regarding Logan's past rhetoric. State Sen. Warren Peterson, a Republican, came to Logan's defense, insisting that "retweets are not endorsements."

"He didn't tell us the election was fraudulent," Peterson added.

Last month, the county commissioned a limited audit of its tabulation machines and found that they had been working properly. Additionally, a hand count of 8,100 indicated a 100% match with the count facilitated by Dominion voting machines.

"Our voters expect this audit, and it can be a big step in returning trust and confidence in our election process," Fann said earlier this month on the new audit.

"This entire charade is only keeping the flame of fraud lit, and we've seen how gaslighting voters into thinking their election was stolen has to end," state Sen. Rebecca Rios, the Senate minority leader, said.