Goldman Sachs has made big promises on climate policy — but where does the money go? 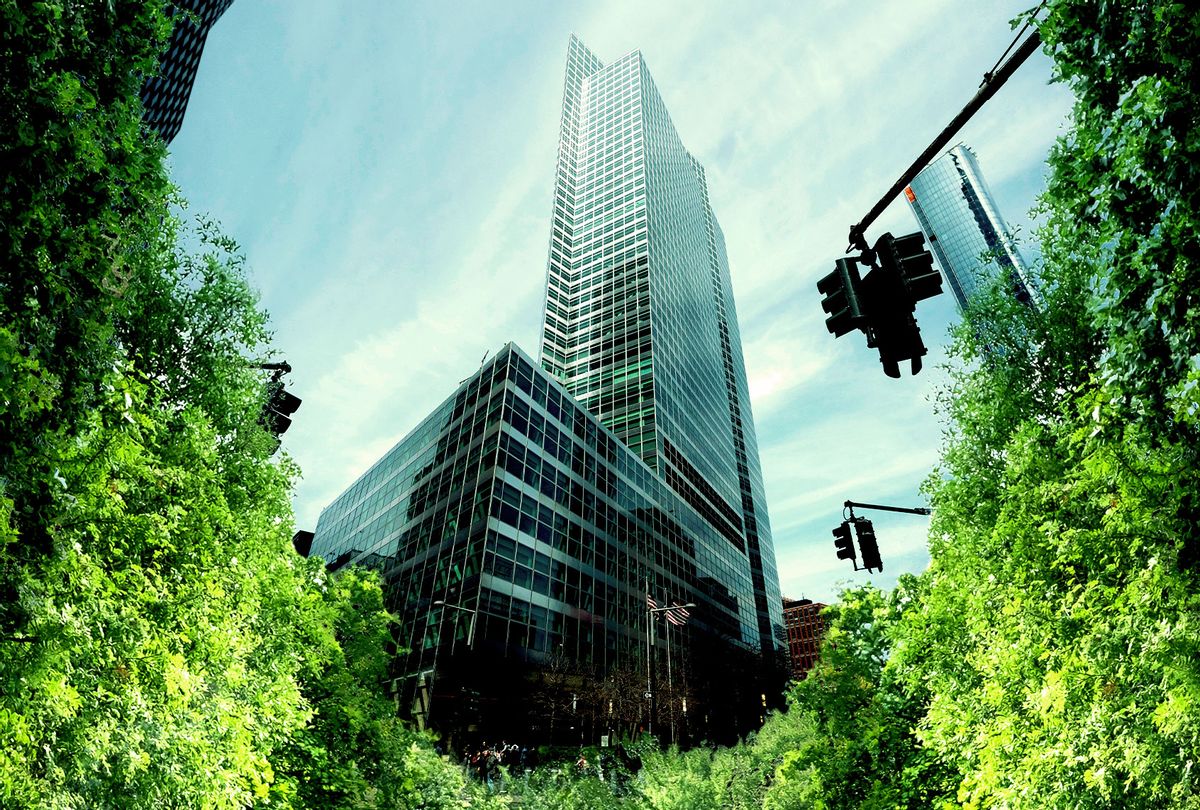 Since the mid-2000s, Goldman Sachs — the world's second largest investment bank, with an estimated $44.56 billion in revenue last year — has repeatedly expressed its concern about climate change and promised to deploy its immense  financial clout to combat it. But Goldman is also one of the world's largest financiers of the fossil fuel industry, and its actual record does not appear to live up to its pro-green rhetoric.

In 2006, for example, the same year Al Gore's film "An Inconvenient Truth" framed climate change as a "planetary emergency," Goldman distinguished itself as an early bird in climate action. It launched the Center for Environmental Markets, partnering with a cohort of academic institutions, corporations and NGOs to "catalyze much-needed capital flows towards environmentally beneficial solutions," and made the first in a series of promises to scale down its involvement in the fossil fuel industry.

Two years later, at the nadir of the Great Recession, Goldman began buying into carbon capture, technology that can trap carbon dioxide from the atmosphere and store it elsewhere, often underground. The company also introduced ESG (or environmental, social and governance) considerations into its funds and portfolios in order to "ethicize" its investment framework — to the extent, of course, that its bottom line would allow.

Since then, Goldman has rolled out a "sustainability" fund for climate-inclined impact investors and pledged to invest hundreds of billions of dollars in "sustainable finance projects." It is also constantly revising its Environmental Policy Framework and produces sweeping sustainability reports on an annual basis. Goldman Sachs, in other words, has virtue-signaled in just about every form of corporate theater imaginable when it comes to environmentalism.

But even as overwhelming evidence continues to demonstrate that fossil fuel companies contribute to the vast majority of global emissions, Goldman has done very little to jettison fossil fuels in any material way.

According to Goldman's filings with the SEC, in every year since 2016, roughly 10 to 15 percent of Goldman's loans and lending commitments have been in what it calls "Natural Resources and Utilities," which a company representative told Salon reflects the energy sector. Last year, Goldman Sachs had the highest loan exposure to oil and gas of any major investment bank, with 11.2 percent of its total loans in the sector. Salon asked for a comprehensive list of the bank's holdings, but a representative declined.

Goldman also routinely rates oil and gas extraction companies favorably, encouraging its clients to rally behind non-renewable energy despite its own rhetoric about the environmental ills of the sector. Last July, for example, Goldman put seven big oil and gas companies on its "Conviction Buy List," a collection of stocks the bank expects to outperform the market. In December of last year, Goldman upgraded ExxonMobil to a "buy" rating for the first time since 2016, and since then, the oil giant's stock has risen from about $38 to just under $60 per share. Most recently, in February, the bank's analysts touted the "50 percent upside potential" over the next year of several European Big Oil stocks, including Galp, BP, Total and Repsol.

The unavoidable conclusion is that Goldman Sachs, both in terms of its business financing and its financial guidance, has not walked the walk in terms of seeking change on climate policy.

In early March, however, Goldman, along with several of its industry rivals — including Bank of America, JPMorgan, Wells Fargo and Citigroup — announced one of its boldest plans to date. The bank said in a statement that it would be "aligning [its] financing activities with a net zero by 2050 pathway." Broadly speaking, "net zero" refers to net-zero carbon emissions, meaning that the amount of carbon emitted by an institution is equivalent to the amount it takes out of the atmosphere.

Many environmental advocates, however, have pointed out that it's not clear what Goldman's promise actually amounts to. Kate Mackenzie, a fellow at the Center for Policy Development, told Salon, "An important question is: what kind of net-zero pathway?" Many such "pathways," she explained, involve carbon capture technologies; some make use of renewable energy, and some utilize a mixture of both. Net zero, in essence, could mean a whole host of things, not all of them equally consequential.

Goldman Sachs may intend, for example, to continue financing carbon-intensive businesses while "offsetting" its emissions with "negative emissions technologies" (NETs) or by "reforestation" (i.e., planting lots of trees). But as Simon Lewis has noted in The Guardian, such ventures often serve as no more than accounting tricks. "Emitting carbon at the same time as building solar capability," he wrote, "does not equal zero emissions overall." Some emissions are harder to remove from the atmosphere than others. So if businesses are not targeting their own actual emissions, then they may not be operating at net-zero, strictly speaking.

There is also significant doubt about whether NETs are economically and scientifically scalable. One glaring problem with reforestation is that there is not enough open space in most countries to grow the millions of hectares of trees needed to achieve substantial carbon capture. Forests also take time to mature, meaning that the effect of reforestation would be too weak in the initial stages of the forest's growth — and some or many newly-planted trees may die as the effects of climate change wreak havoc on the biosphere. So, if part of Goldman's path to net-zero involves reforestation, the question then becomes how the bank intends to measure the changing carbon sequestration rates until 2050 (i.e., when Goldman will, in theory, have decarbonized completely) and whether those rates will even come close to offsetting the company's investments in big emitters.

It's also possible that Goldman's pathway does not involve additional NETs but some form of divestment. Fossil fuel divestment, a practice first put forth about a decade ago, can be an impactful symbolic gesture and send a political signal to the market, as Dr. Maximilian Horster, ISS ESG's Head of Climate Solutions, told Salon. But Horster also said that divestment is weak as an accountability mechanism: If someone sells a fossil-fuel asset, the logic of the market dictates that someone else will buy it. "If a company's value drops because everyone is selling its stock," he explained, "the company will just buy back the stock."

Horster argued that the best thing an asset manager can do to achieve net-zero is simply to stop lending money to fossil fuel companies — an option that Goldman does not appear to have contemplated. "By no longer lending money," Horster explained, banks could "drive up the cost of capital for those businesses. We have to be much more surgical about what real-life economic impact you can have for each asset class."

As of December, 12 percent of Goldman's loans and 18 percent of its lending commitments were in the energy sector. So the bank will have to move far past divestment to comprehensively decarbonize its business.

There is also the question of how Goldman, as a major shareholder in all kinds of corporations, will engage with its portfolio companies to help them meet their respective climate targets. The Rev. Kristen Spalding, senior program director at Ceres, a nonprofit that focuses on climate-friendly investment solutions, said that Ceres "expects to see targets not only on the investment side but also on the engagement side."

For asset managers like Goldman, Spalding explained, "Those targets should be about lining the companies that they hold with the same science-based trajectory — a temperature trajectory. I would expect their engagement policies should reflect the need to vote for or against resolutions that advance that company's agenda."

Goldman hardly has a spotless record when it comes to advancing shareholder advocacy on climate change. According to a Guardian report from 2018, when Goldman Sachs partnered with billionaire Paul Tudor Jones to unveil an ethically-focused exchange traded fund (JUST ETF), the bank blocked numerous environmental reforms proposed in shareholder resolutions. Despite being the second highest polluting company in the world, Chevron scored a position in the fund as its 17th largest holding (out of 450). Proxy voting records show that 14 Goldman funds shot down six out of seven proposals that sought to improve Chevron's climate record, including the nomination of a director with an environmental background, the preparation of a decarbonization report, and greater transparency in company lobbying activities.

Another sobering reality is that the time horizon of Goldman's purported commitment simply is not adequate to the scale of the disaster. The Intergovernmental Panel on Climate Change recently posited that the average temperature of the Earth may increase by 1.5°C in the next five to seven years. According to climate scientist Kevin Anderson, a mere 4°C net increase in the global temperature will "devastate the majority of ecosystems" and is "incompatible with an organized global community." This reality poses a colossal challenge for financial institutions looking to make a meaningful impact on climate change, and evinces the need for aggressive interim targets.

"The work isn't done with the pledge," said Horster. "We as a civil society need to hold banks accountable every year. They need to make sure that carbon removal becomes scalable, and the time for that is long before 2050."

Goldman has promised to "set interim business-related climate targets by the end of 2021." But the bank has not outlined what those targets will be or how it plans to reach them. Previous targets set by Goldman have been flimsily premised. In its Environmental Policy Framework from 2005, Goldman promised to "achieve carbon neutrality across our own operations from 2015 onwards and target 100 percent renewable power to meet our global electricity needs by 2020." In the company's latest statement from March 2021, it claims to have delivered on this promise.

But according to a carbon emissions report conducted by APEX Companies, Goldman consumed 549,940 megawatt-hours of energy in 2018 alone. That number corresponds to roughly 50,000 times average household energy consumption in the northwestern U.S., according to the Northwest Power and Conservation Council. In terms of corporate comparisons, Goldman consumes more than eight times as much energy as Blackrock, but is less than three times its size. Goldman has said it is still "progressing toward [its] goal of 100% renewable power."

In one corporate document, Goldman Sachs called climate change "one of the most significant environmental challenges of the 21st century," adding that "urgent action by government, business, consumers and civil society is necessary to curb greenhouse gas emissions." Climate activists would agree, but if this investment Goliath truly means what it says about the necessity of "urgent action," then it needs to move beyond rhetoric and change its behavior.