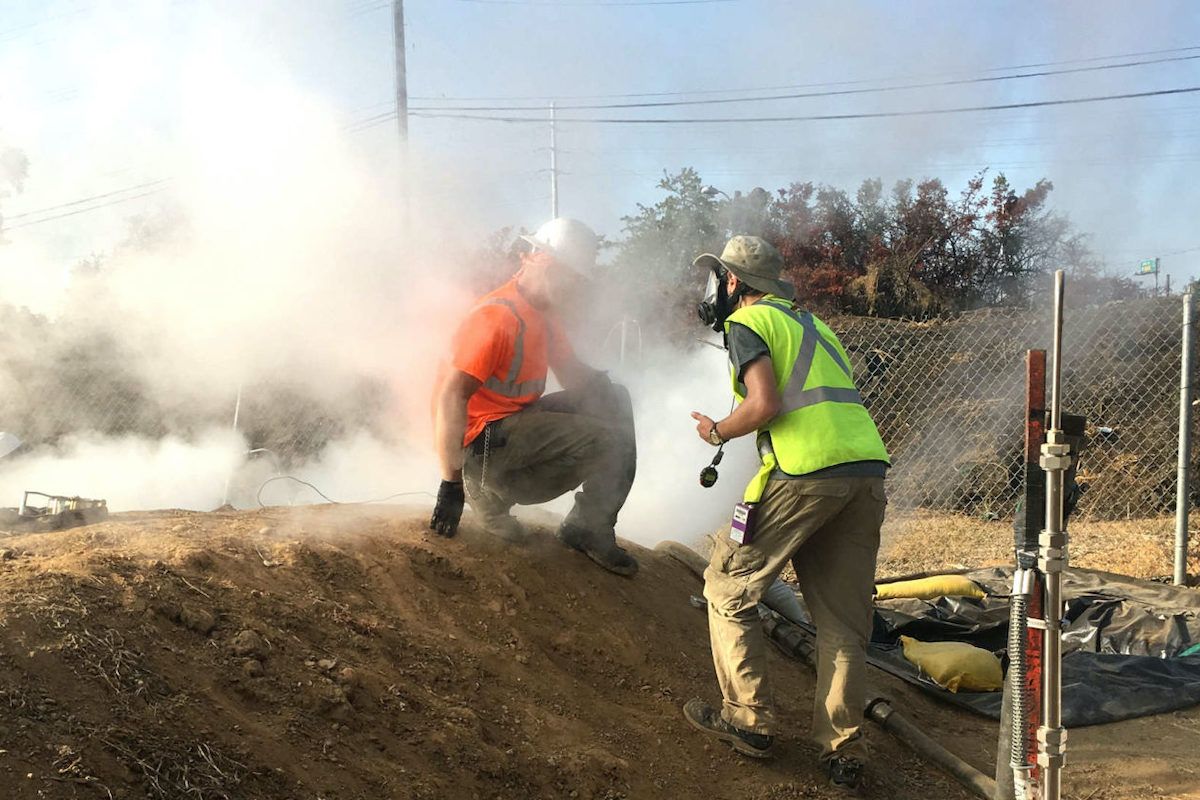 A worker, engulfed inside a plume created by the CIPP process, speaks with a researcher who wears a full face respirator to protect against chemical exposures. (Courtesy of Andrew Whelton / Undark)
--

In 2017, 22-year-old Brett Morrow descended 20 feet underground while working for Benchmark Construction Company, a Bartlett, Illinois-based firm contracted by the nearby Village of Streamwood to repair a 24-inch diameter sewer pipe by lining it with a plastic sleeve. Morrow would never make it out alive. A coroner later determined that he was likely crippled by styrene gas emitted by the plastic liner and then drowned in the liquid that lingered inside the pipe.

It was a tragic flashpoint in a slow-simmering debate over the safety of this pipe repair technology known as cured-in-place pipe, or CIPP, which was developed half a century ago and is now widely used around the world. As Undark reported in 2019, some researchers have raised pointed questions about chemical emissions and environmental impacts associated with the process, which has seen scant scientific scrutiny even as the industry that has rapidly expanded around it has insisted on its safety.

Now, Benchmark and the Village of Streamwood— along with the Indiana-based manufacturer of the liner used, an engineering firm hired to consult on the project, and another Illinois-based firm that Benchmark had hired to train its workers on safety procedures — have agreed to pay $3 million to settle a wrongful-death lawsuit brought on behalf of Morrow's family. While all of the defendants in the lawsuit deny responsibility for Brett Morrow's death, the settlement could spur closer examination of CIPP and its impacts.

To date, several studies of emissions at CIPP job sites have identified the presence of volatile organic compounds, or VOCs, some of which are classified by federal agencies as hazardous air pollutants and potential carcinogens. Much of the attention in earlier research went only to emissions of styrene, a key ingredient in the most popular resins used to make these liners. Styrene can cause neurological damage and is subject to federal regulations to protect workers and the environment. A 2017 peer-reviewed study by researchers at Purdue University also raised questions about the toxicity of the white exhaust plumes that rise out of the ground as the pipes are cured with steam. And subsequent peer-reviewed studies by the Purdue team have confirmed that in addition to styrene CIPP job sites can emit other VOCs such as methylene chloride, benzene, acetaldehyde, and phenol — all hazardous air pollutants.

A January 2019 study by the National Institute of Occupational Safety and Health, a federal agency that studies working conditions and makes safety recommendations to prevent harm to U.S. workers, identified levels of styrene at CIPP work sites that exceed federal safety thresholds.

"Many CIPP workers are oblivious to the risks that they're taking," said Andrew Whelton, a civil and environmental engineer who has headed up the Purdue studies of CIPP emissions. "Some of the CIPP company owners do not understand the chemicals and the exposures that they are placing their friends and workers in front of."

None of the attorneys for the Morrow case defendants returned emails and phone calls made by Undark seeking comment on the settlement. A corporate communications staffer at an insurance company for the CIPP manufacturer JRG Materials declined to comment to "respect the privacy of those involved."

According to the lawsuit, the plastic liner placed inside the pipe at the job site where Morrow died had become bunched or stuck inside the old pipe. When Morrow entered the pipe to "correct the situation," he got stuck in the liner, which was off-gassing chemicals, including styrene, into the air he breathed, the lawsuit states.

Morrow was exposed to styrene concentrations in the air that were well above the safety limit set by the Occupational Health and Safety Administration (OSHA), according to an investigation the agency conducted and released in April 2018. A medical examiner concluded that styrene toxicity was a "significant contributing factor" to Morrow's drowning death inside the pipe liner.

* * *
Over the past few decades, many municipalities, water districts, and transportation agencies in the U.S. and beyond have hired CIPP companies to fix deteriorating sewer pipes and stormwater culverts. The CIPP process starts by embedding resin in a felt or fiberglass tube, sometimes on site, which is then inserted or threaded into a pipe — from one manhole to the next in the case of sewers. The tube is then inflated and treated with steam, hot water, or ultraviolet light, hardening or "curing" the resin to manufacture a new pipe inside the old one. The approach is less costly than digging up and replacing pipes, and market research consultancy Stratview Research estimates that the global market for CIPP could reach $3 billion by 2026.

The size of the Morrow settlement is significant, says Maxwell Mehlman, a legal scholar at Case Western University who specializes in health law. "Particularly since the settlement is not confidential, this should send a signal to the industry and get them to, at least to some extent, clean up their act," Mehlman said.

According to Matthew Belcher, the attorney representing Morrow's estate, the agreement to make the settlement public is meant to spare Morrow's family the threat of future litigation if aspects of a confidential agreement were leaked. "It's the first time to my knowledge that all the stakeholders in the CIPP industry have come together and resolved this type of case for a substantial sum of money," Belcher said. "It's also the first time that I'm aware of we've ever been able to negotiate the resolution of a case without a confidentiality agreement."

Accounts of people reporting exposures to emissions from CIPP installations crop up routinely in local news. Through the end of 2019, Whelton and his colleagues tallied more than 130 incidents in which people — nearby residents and office workers, as well as students and teachers at schools — reported an exposure to CIPP emissions. In some cases, people who have felt sick or harmed after exposures to emissions from cured-in-place pipe installations have sued and accepted smaller sums under confidential settlements.

Photographs taken over the years frequently show workers standing in CIPP exhaust plumes without wearing protective masks. The mix in the plumes also includes partially-cured resin and resin droplets, Whelton and his fellow researchers have found.

This and other research raised concerns and backlash from some customers and members of the CIPP community, including the National Association of Sewer Service Companies (NASSCO), one of the industry's major trade organizations. NASSCO's response included commissioning a University of Texas at Arlington research center that receives significant funding from the CIPP industry to conduct a review of studies of chemical emissions at CIPP job sites, including the findings of Whelton and his colleagues at Purdue. The review, which was presented at conferences, concluded that "existing studies do not adequately capture worker exposures or levels in the surrounding areas to which workers or the public may be exposed."

NASSCO has long maintained that CIPP can be performed safely if workers take measures such as wearing personal protective equipment, preventing resin spills, capturing and properly disposing of the resin from any spills that do occur, and monitoring the air on the job site. In October 2020, based in part on its own recent study of job site emissions, NASSCO published updated safety guidelines for the use of styrene-based resins to make cured-in-place pipes. The guidelines do not name Brett Morrow, but state that "there has been at least one reported incident involving worker safety where the effects of styrene gas may have contributed to the incapacitation of a worker who was not following proper confined space procedures resulting in loss of life due to drowning."

When emailed for comment on the settlement, Sheila Joy, NASSCO's executive director, wrote that the organization builds awareness for job site safety by developing safety guidelines and various technical resources on best practices for its members, and that it is "continuing our investigation into the safety of emissions on CIPP job sites through our ongoing research."

Six months after Morrow's death, OSHA issued more than a dozen citations against Benchmark, including for exposing employees to levels of styrene exceeding federal safety limits. Benchmark successfully appealed some of the citations and ultimately paid $55,000 to the agency, records show.

The OSHA citations state that Benchmark did not train its workers to do the job safely, that workers did not monitor air in the pipe for styrene, and that two employees working underground were not connected to a retrieval line. But Belcher, the Morrow family's attorney, lays a large portion of the blame for these lapses on the Illinois-based firm that was hired by Benchmark to train its workers in CIPP safety procedures. "Benchmark tried to do the right thing and hired a safety company that represented itself as being able to deliver on the job they promised," Belcher said. "And in our case, the first named defendant was always the safety company Optimum Services Group."

Tim Swartztrauber, a water inspector for a small town in southwest Ohio that occasionally hires companies to do CIPP work, agrees that these workers face risks. "They are just not knowledgeable about this stuff," he said. "And so, until there is some kind of reform in the industry you are going to have more deaths. You've got people doing CIPP in heavily residential areas. You've got people in their houses smelling this stuff."

At a CIPP installation site where Swartztrauber took photos in early March, he saw workers standing in a white plume of material coming from an exhaust pipe leading from the underground job. At one point, some workers waited inside a trailer near the plume. "The whole time that the steam and chemicals that are coming out that exhaust, it is blowing out by the job trailer," he said. "All the fumes are blowing right into that job trailer."

Whelton, meanwhile, says the scientific case for action to better protect CIPP workers has been well established in the past four years of research, and he continues to push the government to intervene to spur changes in CIPP industry practices that affect workers. Earlier this month, Whelton sent a letter to the heads of OSHA, the Department of Labor, and several congressional oversight committees asking them to take action to protect workers who install cured-in-place pipes and ensure that they are aware of the work's safety risks.

"I am deeply concerned," Whelton wrote, "that more CIPP workers and other workers nearby will be harmed and may die."

Robin Lloyd is a freelance writer and editor, as well as a contributing editor for Scientific American and adjunct professor at New York University.