As O'Brien notes, it is easier for women to climb K2 than it is for them to reach the Fortune 500 C-suite 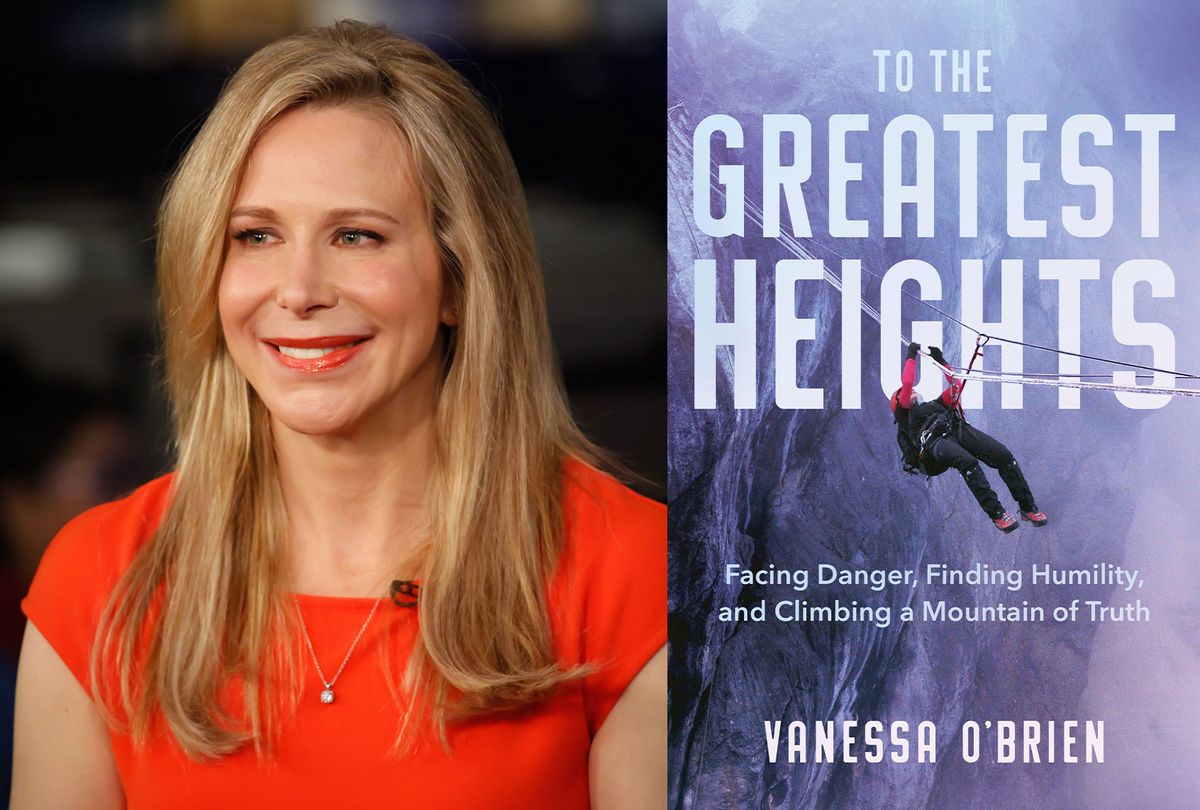 The phrase climbing a mountain is often used as a metaphor to describe doing something hard. And for good reason — obviously, summiting a mountain, literally, is a challenging feat.

Author and mountain climber Vanessa O'Brien knows this firsthand. She was the first American woman to climb K2, and as a dual citizen, the first British woman to return from its summit alive. But O'Brien didn't grow up wanting to climb mountains — a career she now doesn't advise young children to take up because of the dangers that come with it. In fact, before the 2007 financial crisis, O'Brien was focused on a different kind of climb up the corporate ladder. Once her career fell into a tailspin in 2008, she decided to take up mountain climbing as a hobby that eventually turned into her career.

The jump from business to mountain climbing wasn't an easy one for O'Brien. There were plenty of times she considered quitting, as detailed in her debut memoir "To The Greatest Heights: Facing Danger, Finding Humility, and Climbing a Mountain of Truth."

The story begins in 2008 when O'Brien is forced to rethink her career, and it takes us on a journey of multiple attempts to scale the world's tallest peaks — including Everest and K2. What makes the story riveting and inspiring is that failure is frequent, but often a catalyst for change, grounding readers in the reality that hard things take a lot of work. Even if you're not the outdoorsy type, you'll enjoy O'Brien's story and quick-witted humor as she takes us around the world on unforgettable adventures.

O'Brien spoke to Salon about her experiences by phone; as always, our interview has been edited and condensed for clarity.

What inspired you to take this pivotal moment and turn it into a memoir?

I started writing when I came off K2 in maybe 2018. When I was speaking to different audiences and people, I always found the Q&A would go as long as the talk or longer. But ultimately people would always end by asking: "When is the book coming out?"

And I would joke, like, "What book?" And they would say, "No, no, no, but these stories... Hollywood couldn't make these stories up." And I started thinking, and I thought, "You know what? Sometimes life is funnier. Maybe Hollywood couldn't make this stuff up." And some of the things — the situations you find yourself in or the things that happen to you — actually they are really funny stories and they are circumstantial. And they are real. And there's learning in all of them. And so, it really was an on-request thing.

I started taking it more seriously. I thought, "You know what? Could I do it? And why should I just wake up one day and think I can't?"

"Why should I just wake up and think I'd be a good author?" Right? But it's almost the same way I approached climbing.

What was the writing process like for you revisiting these memories?

The litmus test for me was, if I felt it could help somebody else, it stayed in.

If it was just sensational, it was out. Because there are sensational things out there.

As a reader, I appreciated your vulnerability in disclosing what you did about your past. And even just being so frank about how your body changes at high altitude.

Yeah, sometimes I tried humor, but the humor was already there. I didn't make those things up, that really happened. Like with the hemorrhoids.

At high altitude, it's the same way you worry about strokes and things like that. It's basically, it's bubbles, and bubbles form in other aspects. A hemorrhoid is a bubble. Blood clots are bubbles.

So it's scary when it manifests itself like that. It's horrendous and horrible. And it's attached to you, and how do you get rid of it? Those are humiliating things, but...

Not on the mountain?

Yeah, exactly. And I also know that probably every pregnant woman has had them and goes through them. There's a lot of people that will read that and say, "Oh, 100%."

There's so much of a focus on Everest in popular culture, which is a big part of your memoir, but for you the biggest challenge is K2. Even though it's a shorter peak than Everest, K2 is purportedly more difficult to summit; about a quarter of those who have tried died. Can you explain to our readers why summiting K2 was so significant for you, especially as a female mountain climber?

Sometimes you look at how hard things are by comparing different things. And I remember once looking at, say, the number of women who ran Fortune 500 companies. And I remember one year, looking at it, and it was like, okay, so the number had gone from 12 to 14, and then one year, it had gone to something like 24. So 24 of the 500 Fortune 500 companies were run by women. And, let me just see if I've got my math right here. Okay, so 24 divided by 500. 4.8%. So let's call it five percent. Five percent of women were running Fortune 500 companies. And then I went on Everest and said, "Okay, well, of the women who have climbed Everest, what percentage was that?" And it turned out to be double.

Sometimes it's the comparison that shocks you. Because people thought it was so hard to climb Everest. And yet there are twice as many women climbing Everest than women even making it to the C-suite. So, if I had my feminist hat on, I was appalled.

But Everest is the most climbed mountain. So when you go to just 237 meters left to the second-highest mountain, suddenly, there's only 50 women who have climbed, instead of 377 women.

What I love about your memoir is that it shows how important accumulating experience is, even when you don't reach your "goal." And I loved this quote you had about this: "Experience is like the switchbacks that zigzag up the side of a mountain; you keep returning to the same parallel but with a higher point of view." I got the sense that your view on "failure" has changed. Can you share more about that shift in perspective?

I don't think you fail unless you give up. And that's a really interesting point of differentiation because once upon a time, I would've looked at, say, season one or season two of K2 and said, "Hmm. Okay, well, it's time to go home. This has been a failure." But the point is, and it's almost like when the UN women hand me that flag back and I'm crying because they won't give up on me, even when I think I'm giving up on myself, right?

You can't fail unless you give up. And as long as you don't give up, you're not out because you know you're going to continue to do something. And that's the difference between what is the end and what's to be continued.

The problem with a goal is that it's finite. If you hit it, then you're done. So really, it's not about a goal. Because if it were just about a goal, then you reach it and you're done, and what's next? And then you could say, "Oh, but what about a series of goals?" Well, okay. But a series of goals, really, what you're talking about is a purpose. The more I thought about it... Now we're getting more into philosophy.

So I'm curious how the pandemic has been for you. You were part of the Challenger Deep mission in 2020? Are you still climbing?

Yeah. Look, the pandemic was terrible for everyone. The only thing I will say is that, as a mountaineer, there were many tools in our toolkit that were really pandemic friendly. Like those masks. We wear these because the yaks kick up dust on the trail and there's pollution in the city, and also, we want to warm our breath in the cold, dry air. And climbers get all sorts of respiratory diseases and it spreads really easily, so this is really necessary.

The other thing is, when we cough, we always cough in our elbow. We don't cough in our hands because, again, you're going to touch something with your hands. So that was something that was always the mountaineering protocol. And washing your hands. I'm so glad people learned how to wash their hands.

So many people might be where you were in 2008, when this story begins— without a job, not sure what's next. What advice would you give them about starting over?

I think it does feel a little bit like then. I would say for people starting over to be optimistic and to think about what they want to do with an open mind. I didn't know what I wanted to do at all. And what led me to this path was supposed to be temporary.

What I did was, I made a list. They can make a list and take stock of the things that they like to do, the things that they're good at. See if they see any parallels in that. Talk to the people that know them, get advice. They'll find that a penny will drop somewhere.

That's what happened for me. The penny dropped. And they won't know when they hear it. I knew. When somebody said "Everest," it was crystal clear.