William F. Buckley and the Birchers: A myth, a history lesson and a moral

William F. Buckley claimed he had banished far-right paranoia from the conservative movement — but look at it now 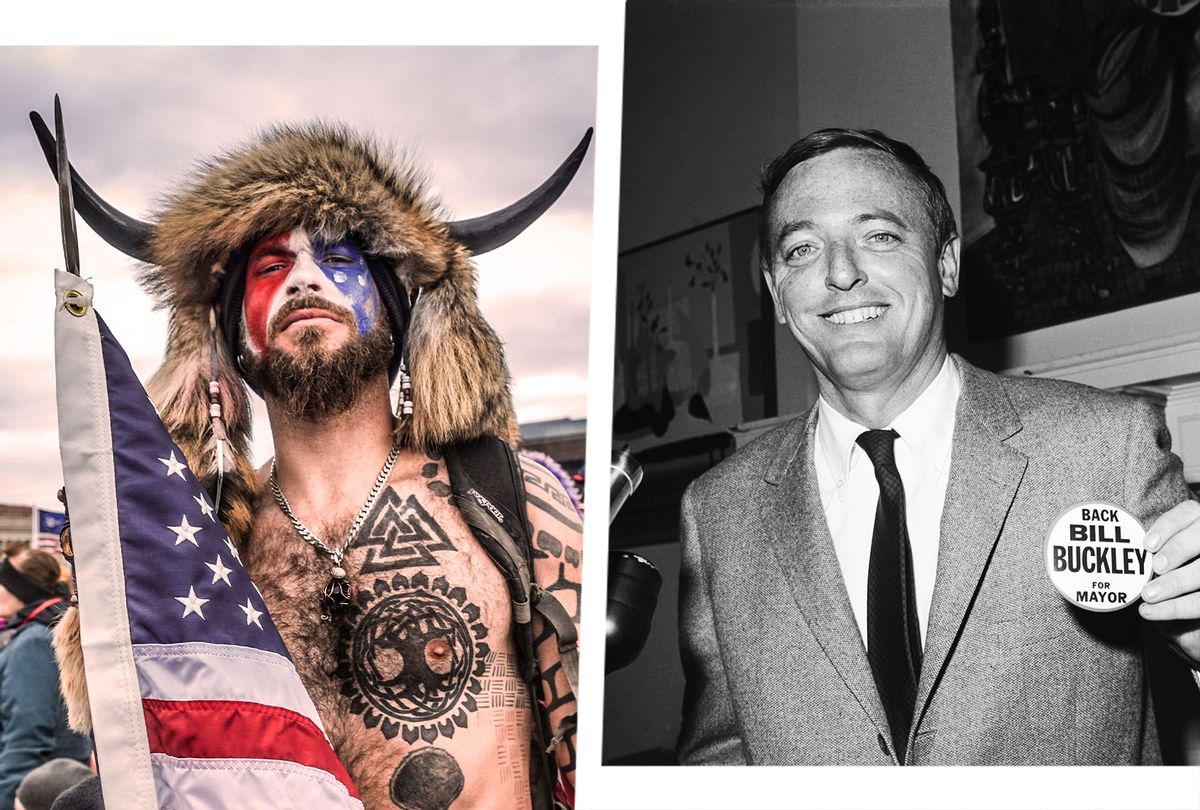 The story goes like this: in 1962, the leading conservative intellectual William F. Buckley Jr. used his magazine National Review to condemn the far-right John Birch Society. The denunciation isolated the Birchers and their wild conspiracy theories within America's conservative movement and led to their downfall.

The story is a myth, reliant on half-truths and omissions to make it convincing. Yet in articles and books, Buckley repeated it again and again. As the Republican Party grapples with QAnon believers and Trump loyalists, the myth that Buckley saved conservatism from extremists has been repeatedly cited as fact to explain how the party of Lincoln can save itself.

The truth is far more interesting. It shows that extremism in America's conservative movement has ebbed and flowed since the 1950s, yet never disappeared. Buckley claimed to have vanquished the Birchers, acting as the gatekeeper of American conservatism. Yet when Barry Goldwater became the first conservative presidential nominee of a major political party in 1964, it was the Birchers, not Buckley, who played the key role. The Birchers had a profound impact on American conservatism, a fact Buckley wished to expunge. He wanted to make conservatism respectable. To acknowledge the influence of the Birchers would be an admission of failure.

It's true enough that Buckley and the Birchers represented opposite wings of American conservatism. Buckley was the erudite face of conservative intellectualism, a self-described "intellectual revolutionary" against the liberal order. In 1955, he founded National Review, which became the publication for highbrow conservative opinion and carried conservatism into America's mainstream intellectual discourse.

The John Birch Society, on the other hand, preached a unique brand of paranoid reactionary conservatism. The brainchild of retired candy manufacturer Robert Welch Jr., the society was founded in 1958 to root out communist subversives in government and American society. Although membership was secret, it is estimated that within a few years Welch had 20,000 to 100,000 followers. (The actual John Birch, by the way, had nothing to do with it: He was a U.S. military intelligence officer killed by communist insurgents in China in 1945, and later embraced as a martyr by the American far right.)

Inherent in the society's mission to challenge subversion was Welch's conspiracy theory-laced worldview. In 1958, Welch mailed Buckley a 300-page summary of his theories entitled "The Politician." The manuscript contained the lurid claim that the sitting president, Dwight Eisenhower, was a communist and that past presidents, the CIA and civil rights activists were all secretly controlled by a global communist conspiracy.

Insane as the document was, Buckley did not denounce Welch, nor was he openly hostile to the John Birch Society. He instead tried to maintain cordial relations, even forewarning Welch when National Review published an essay criticizing the Bircher magazine American Opinion. "A little friendly controversy among ourselves now and then is not too bad an idea," wrote Buckley. Welch agreed.

The society's growing prominence alarmed Buckley, however. Such an avowedly conspiratorial group could very well hamstring American conservatism just at the moment he perceived it gaining momentum. With the Birchers in the public eye, Buckley believed he needed to make a statement. Yet he feared tearing American conservatism apart. Therefore, he directed all condemnation at Welch so as not to offend the society as a whole.

Buckley wrote two editorials, in April 1961 and February 1962, criticizing Welch. The first gently critiqued Welch's practice of citing communist subversion when there was none and concluded by saying "I hope the Society thrives" despite its bungling leader. The February 1962 editorial, entitled "The Question of Robert Welch," was more biting. Buckley wrote that Welch's conspiracy theories made him a man "far removed from common sense." In an effort to not offend the Birchers as a whole, however, Buckley inaccurately portrayed Welch as an aberration from the society he led.

Buckley even tried to maintain his friendship with Welch. Shortly after the 1962 editorial, he wrote Welch, "I am very anxious to keep current on your thinking and the society's activities, and would be grateful if you would look into this. If our subscription has expired, I should be only too happy to look to renew it."

This was the totality of Buckley's supposed purge. In later years, Buckley recast these two editorials as lethal salvos that drove the John Birch Society from the conservative movement. It was a narrative suited to Buckley's view of himself as the patrician leader of conservatism. Yet it was a fallacious portrait. In the 1960s, American conservatism was a hodgepodge of groups held together by shared principles. National Review was one part of a large movement. Buckley was in no position to isolate those he disliked. There was no mass exodus from the John Birch Society. Buckley's editorials were a disassociation, not a purge.

Aside from self-aggrandizement, there was another reason for Buckley's desire to rewrite history. In 1964, Sen. Barry Goldwater of Arizona captured the Republican presidential nomination. With conservatism now on the presidential stage, it was the Birchers, not Buckley, who became the dominant force in the movement.

Despite Buckley's friendship with Goldwater, he was sidelined early in Goldwater's campaign. In a supreme irony, this effort was framed as necessary to distancing Goldwater from people who could be considered extreme. Two of Goldwater's aides invited Buckley to dinner and then told the New York Times about the evening, disavowing Buckley in the process. Buckley thus spent the remainder of the campaign on the periphery.

The Birch Society, on the other hand, was heavily involved in Goldwater's campaign. Since Bircher membership was secret and Goldwater had previously disavowed Welch, the Goldwater campaign had plausible deniability about Bircher support. This provided a passionate volunteer base for a contentious Republican primary. At the Republican convention, party moderates denounced Goldwater's extremist supporters, namely the Birchers. Far from joining in the condemnation, Goldwater validated Bircher support. In his nomination acceptance speech, Goldwater famously declared "that extremism in the defense of liberty is no vice." His supporters practically blew the roof off the convention hall with their ecstatic cheering.

In the general election campaign, Birchers spread their beliefs on an unprecedented scale by distributing a slew of paperback books — costing a dollar or less, with a form on the last page for bulk orders — which argued for Goldwater while parroting their conspiratorial worldview. Their three top selling books (Phyllis Schlafly's "A Choice Not An Echo," John Stormer's "None Dare Call It Treason" and J. Evetts Haley's "A Texan Looks at Lyndon") preached the Bircher message of unwavering reactionary conservatism, repeating Welch's conspiracy theories while claiming that Democrats were communist sympathizers and Goldwater's opponents were un-American. By October 1964, their combined sales reached 18 million copies. This, calculated the historian Rick Perlstein, meant the books had sold enough copies to be in the homes of one in 10 Americans. National Review's circulation, by comparison, was infinitesimal. The Birchers had carried their rhetoric into the mainstream. Goldwater did not disavow the Birchers or their books. His resounding defeat in 1964 — by most measures the greatest electoral landslide in American history — was largely attributable to the widely held belief that he and his supporters were extremists.

Buckley and Goldwater condemned the Birchers as a whole after Goldwater's defeat. Yet the Birchers had already made their mark on the movement. Shortly thereafter, Buckley began to claim that he had purged the Birchers in the early 1960s. When, in 1966, the chairman of the Anti-Defamation League claimed that the Birch Society had played a key role in Goldwater's 1964 campaign, Buckley bristled. He would not admit there were extremists in American conservatism.

The clash between Buckley's pretensions and reality was laid bare in his 1968 debate with the segregationist governor George Wallace, who was running as a third-party presidential candidate. Buckley tried to act as gatekeeper, saying Wallace was not supported by any prominent conservatives. Wallace was dismissive, saying, "Let'em be against me. What difference does it make?" Buckley failed again to curtail conservative extremists. Wallace, heavily supported by the Birchers, received nearly 10 million votes and carried five states in the Deep South. (No third-party candidate since then has even won one.)

Reactionary extremists are a part of the conservative movement. Although membership in the Birch Society began to wane in the 1970s, that had nothing to do with Buckley. On the contrary, the Birchers' rhetoric and tactics were now central to the Republican Party. Other conservatives — Pat Buchanan, Lee Atwater and Rush Limbaugh, among many others — carried on and perfected the Bircher tradition of reactionary conspiracy theories. Until Donald Trump, Republican leaders from George H.W. Bush to Mitch McConnell believed they could control the reactionaries. They failed in 2016 and they continue to fail today. Extremists have outlasted and undone all efforts to break their grip in the Republican Party.

Buckley never purged the extremist far right from American conservatism, largely because he could not possibly have done so. Reactionary paranoia is an organic component of the American right. Such facts, however, run contrary to the way many "mainstream" conservatives view themselves. It behooves them to present the movement as capable of expelling its extremists. It is comforting to present Buckley as a sort of Edmund Burke reborn, the intellectual gatekeeper of conservative decency standing against the barbarous mob. Yet it is a fantasy. Until conservatives accept this, they will continue to underestimate the extremists. And as we see clearly today, it is the extremists who control the party, not the refined intellectuals who convince themselves otherwise.

Cormac Kelly writes about the far right in Britain and the United States. His other articles can be found at Interzine.org.