The best way to honor Martin Luther King Jr.'s memory is to advance the work of economic justice 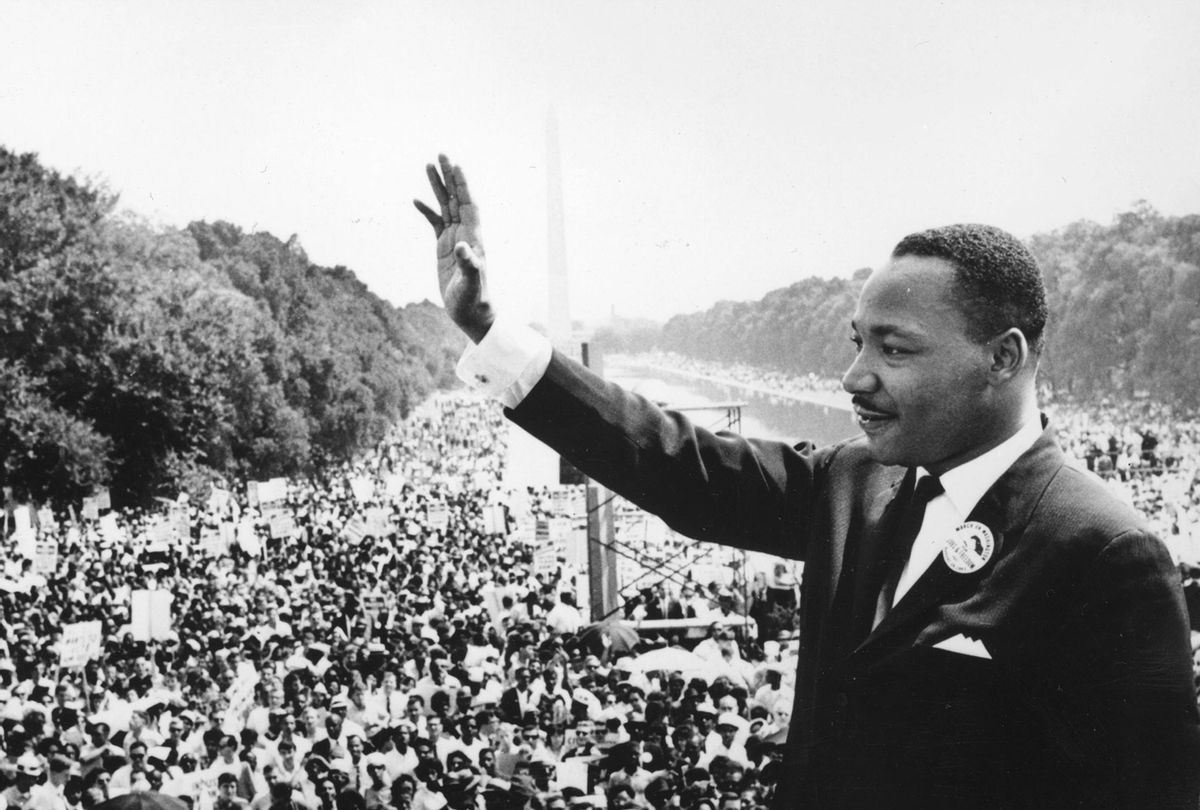 Black American civil rights leader Martin Luther King (1929 - 1968) addresses crowds during the March On Washington at the Lincoln Memorial, Washington DC, where he gave his 'I Have A Dream' speech. (Central Press/Getty Images)
--

Excerpted from "I Am Somebody: Why Jesse Jackson Matters" by David Masciotra. Copyright 2020 by I. B. Tauris & Company. Reprinted with permission.

"The pathology, the sickness, the neuroses of Memphis, of this society is what really pulled the trigger," Jackson told a television reporter less than a day after Martin Luther King's assassination, "The white people do not know it, but their best friend is dead." White America rarely, if ever, truly detects friendship, and what promises improvement for the universal American experience. Racism, in addition to all the words a mourning Jackson used to describe it on April 5, 1968, is what Toni Morrison calls, "a fantasy." So lost in the spell of its own hypnosis, much of white America cannot recognize the obvious veracity of what Jackson explained to me as the "residual benefits of the civil rights movement." "Before the Voting Rights Act," Jackson said, "white women could not serve on juries. College students could not vote on campus. There was no bilingual voting." With characteristic rhetorical verve, Jackson also delineates the social, political, and financial rewards of tearing down the "cotton curtain"—"You could not have the Tennessee Titans behind the cotton curtain, the Carolina Panthers, the Atlanta Braves. The players would not have been able to ride on the same bus together. You couldn't have a BMW plant in South Carolina behind the cotton curtain. Furthermore, you couldn't have had presidents Carter, Clinton, or Bush. The shame of segregation and lynching would have prevented their politics from going national."

In the lobby of the Chicago headquarters of Rainbow/PUSH, the civil rights organization that Jesse Jackson founded, there is a lifelike mock-up of Jackson and King standing together on the balcony of the Lorraine Motel. The description underneath the image anoints King as the "architect of American democracy." The much-ballyhooed brain trust of the Founding Fathers could not envision a system of self-governance without slavery and with an unlimited franchise. King could. Few Americans realize that the Soviet Union's most popular and effective propaganda tactic to divert attention away from American criticism of its routine human rights violations was the slogan, typically attached to visual depiction, "And you are hanging Blacks." The FBI, most elected officials, and the majority of white Americans saw King as subversive, when in reality he was America's most powerful defender, just as Jackson, suffering through similar slander, remains an advocate for the genuine article America, what Walt Whitman called, "Centre for equal daughters, equal sons . . . Perennial with the Earth, with freedom, law, and love."

The tragic sweep of America's failure to support King's transition from civil rights advocate to economic justice crusader emerged in full proportion a month after his assassination. It was the late leader's dream to converge on the National Mall of Washington DC with a poor people's march. He hoped it would triumph just as the 1963 march on Washington where he gave the most famous of all his speeches—"I have a dream"—and gained a momentous victory for Black freedom under American apartheid. To prepare for the demonstration, thousands of impoverished and dispossessed citizens of the world's richest nation constructed a shantytown in the capital, calling it "Resurrection City." It was Occupy Wall Street, but only in earlier and grander form. Residents of Resurrection City elected Jesse Jackson as their mayor. The grief emanating out of King's untimely death coalesced with the relative lack of success of the Poor People's Campaign, and as Resurrection City was preparing for collapse, its constituents looked to their mayor to "give them something," to use Jackson's simple phrase. "We were all depressed," Jackson said. "I had no money to give them. I could not get them back home. We did not change any laws. I looked in their tired faces, and said, 'You still have worth. You may be hungry, but you are somebody.' Then, I asked them to say it, 'Say, I am somebody.'" Jackson alchemized as inspiration an old poem by Rev. William Holmes Borders, Sr. to, in the absence of anything material, provide the least of his brethren with those qualitative gifts that can never disappear without consent—hope, faith, and self-respect.

King receives the adulation of a saint in contemporary America, but the painful irony is that the reverence for his memory actually undermines his legacy, which demands a radical redistribution of wealth, an activation of social democracy, and continual efforts for peace in the world's epicenter of militarism. As Jackson put it in 2020, "I detest the way King days are commemorated, making him appear superficial. We've neutered him in death." Meanwhile, mendacious politicians manipulate his message into a disguise with which they can smuggle any position—no matter how contrary to King's vision and mission—through customs. Mike Pence even invoked the name of King—on Martin Luther King Day—to argue on behalf of President Donald Trump's goal of constructing a wall along the southern border of the United States. America claims to love King in the morning, but by the afternoon it has moved in the direction opposite of King's philosophy. Many Americans also routinely cast mockery and ridicule on living civil rights leaders and activists who are organizing and advocating for precisely what King believed throughout his life. Speaking on the canyon separating America's hollow and hypocritical celebration of the mythic King, and the politics and leadership of the actual King, Jackson offered an analytical summary: "We honor martyrs not marchers." "Martyrs," he continued, "comfort us. Marchers challenge us. Martyrs only require that we look back, while marchers demand that we move forward."