Wider and wider container ships carry more cargo, but are extremely difficult to steer in tight spaces like a canal 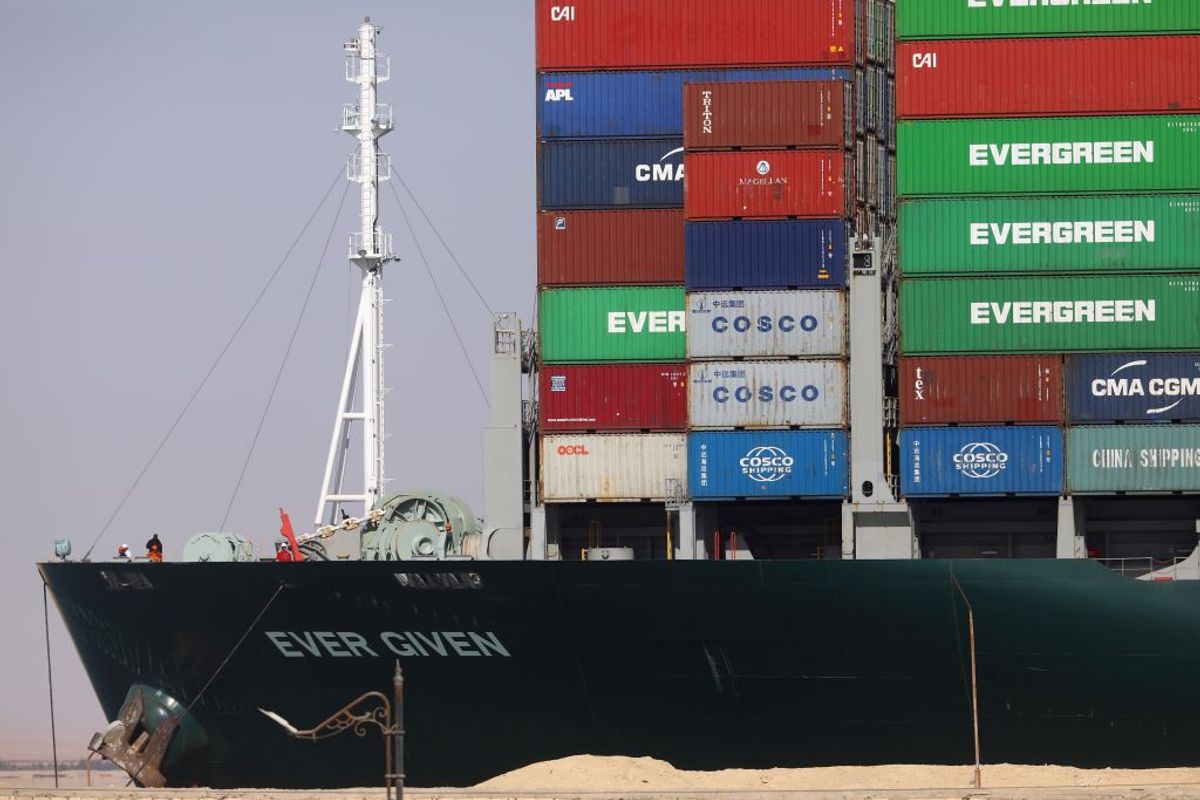 Squeezing big hardware through tight spaces is not a new problem. While some attempts are more ambitious than others, it's also not really a story until something gets stuck.

Similarly, piloting giant container ships through Egypt's relatively narrow Suez Canal is an unexciting daily occurrence, even for ultra-large ships like the Ever Given that are too big to fit through the Panama Canal. On average, more than 50 ships a day navigate this route without incident, and without making headlines. Unfortunately, the Ever Given is now firmly wedged across the full span of the canal, making it both a problem and an interesting story.

As shipping companies look to increase economies of scale by transporting more containers at once, they are building bigger and bigger ships. Part of this new generation, the Ever Given is a veritable giantcompared to older models, able to carry the equivalent weight of 1,600 Statues of Liberty across the ocean. It measures 400 meters in length, the currently accepted engineering maximum for cargo vessels partially due to docking availability at ports and partially due to the large bending stress that occurs along the length of the ship in extreme weather. A longer ship would be at a high risk of snapping in two if hit sideways by a strong enough wave. Adding more containers on top is also problematic because of the excessive forces on the bottom containers in the stack. So, in order to increase container capacity, ships have gotten wider. That's fine on the open ocean, but navigating through the fixed width of a canal becomes more difficult as the ship extends closer to the banks.

In general, steering a boat is more challenging than driving a car. Unlike the tires of a car that grip the surface of the road, the boat isn't anchored to anything. Somehow, the mythical riverboat pilotsof high school physics problems always manage to drive their boats in a straight line, but in the real world it's not so easy. Ships are at the mercy of water currents and waves, not always moving in the direction they're pointed and unable to make corrections quickly when they veer off-course.

The hydrodynamics of large vessels get even more complicated in a shallow waterway like a canal. Instead of simply getting pushed deeper into the ocean, the enormous amount of water displaced by the ship has to squeeze between the ship's hull and the sandy floor and sides of the waterway. This causes the vessel to move in unintuitive ways. For example, as the ship moves forward, the water level in the canal is slightly deeper at the front (bow) of the ship than at the rear (stern), since the water can't squeeze past the ship quite fast enough to maintain equal depth. Instead of staying level, the stern of the ship ends up sinking down closer to the canal floor than the bow.

That's where Bernoulli's principle comes in. As displaced water travels under the hull of the ship from front to rear, it gets squeezed through a smaller area, causing the water to speed up and the pressure to drop. To compensate, the hull of the ship is pulled downwards towards the canal floor more strongly at the stern than at the bow, increasing the asymmetry of the "squat." While this is a known phenomenon, it can be hard to calculate because the magnitude of the effect relies on both the geometry of the ship and of the specific waterway being traveled. As container ships have become larger, the clearance between ship hulls and waterway floors has become smaller, leaving less room for error and increasing the possibility of grounding. Speed also plays an important role, as faster-moving ships will see a greater squat effect.

It is unclear whether a lull in the wind or human error or something else was at fault for the initial westward drift, but once that happened the bank effect became the final nail in the sandy coffin, pulling the stern of the ship towards the western shore while pushing the bow away. Since the Ever Given is almost 100 meters longer than the full width of the canal, this rotation firmly lodged the stern of the ship in the other side, completely blocking traffic. The two cargo ships that had entered the Suez Canal behind the Ever Given as part of the same convoy were able to stop in time, and have since been moved back to and anchored in the Suez Gulf along with hundreds of other ships awaiting the reopening of the canal.

Many ideas have been tossed around, but in order to figure out how to refloat the Ever Given, we need to understand how huge steel boats actually manage to float when they're not lodged in the banks of a major shipping artery. The short answer is buoyancy, or the force exerted on an object when immersed in a fluid. Boats displace water, sinking down until the amount of water they've displaced has a weight equal to the boat's weight. When a ship runs aground, increasing buoyancy in order to sail away requires either decreasing the total weight or increasing the amount of water around the ship. That second part can be accomplished by taking away sand (i.e. dredging), or by relying on natural events like a high tide.

With some quick back-of-the-napkin math, WIRED estimated that 25,000 tons of cargo would need to be removed from the Ever Given, or the equivalent amount of water added around the ship, in order to raise it by ~1 meter. While that added height may not be enough to allow the ship to float free, it's a good reference to help understand why unloading the ship would be a slow and complicated process.

25,000 tons of cargo is about ten Olympic swimming pools of water, or an estimated ~600 shipping containers. In terms of cargo, the easiest things to remove from the ship are ballast water and fuel. Offloading containers is harder because it requires a crane as well as somewhere to put them, and there is not any of the necessary infrastructure along this part of the canal. In the very worst case, containers could be lifted off of the ship one by one with a helicopter, but canal officials are hoping to avoid that option.

The main strategy has been focused on making room for more water around the ship. Since the event, dredgers have been working to remove sand and mud from the bow of the ship in an effort to refloat it. As of Saturday evening, five days after grounding, these machines had removed the equivalent of eight Olympic swimming pools full of sand. In addition, 9,000 tons of ballast water were removed from the ship to decrease the weight. These numbers line up nicely with the quick calculations done by WIRED magazine, adding some optimism to official statements by the chairman of the Suez Canal Authority saying that the ship may be freed after the weekend. In fact, the stern of the boat was clear enough for the propellers to spin on Friday evening, but they were soon jammed again because of the changing tides. Efforts continue to focus on digging around the ship and pulling with tugboats, but the rescue crews will have to resort to offloading containers if progress isn't made soon.

The physics is clear: as cargo ships become wider, the margin for error when sailing through shallow waterways like the Suez Canal becomes much smaller. Larger ships displace more water and have less of a gap between the hull of the ship and the walls and floor of the canal, increasing the squatting and bank effects and making the pilot's job even more difficult than it already is. While blockages of this scale have until now been few and far between, ships are still getting bigger and eventually physics will catch up with them.

Ever Given Massive Science Suez Canal