"We will have to tell Trump you're a DEFECTOR": GOP rolls out creepy new fundraising campaign 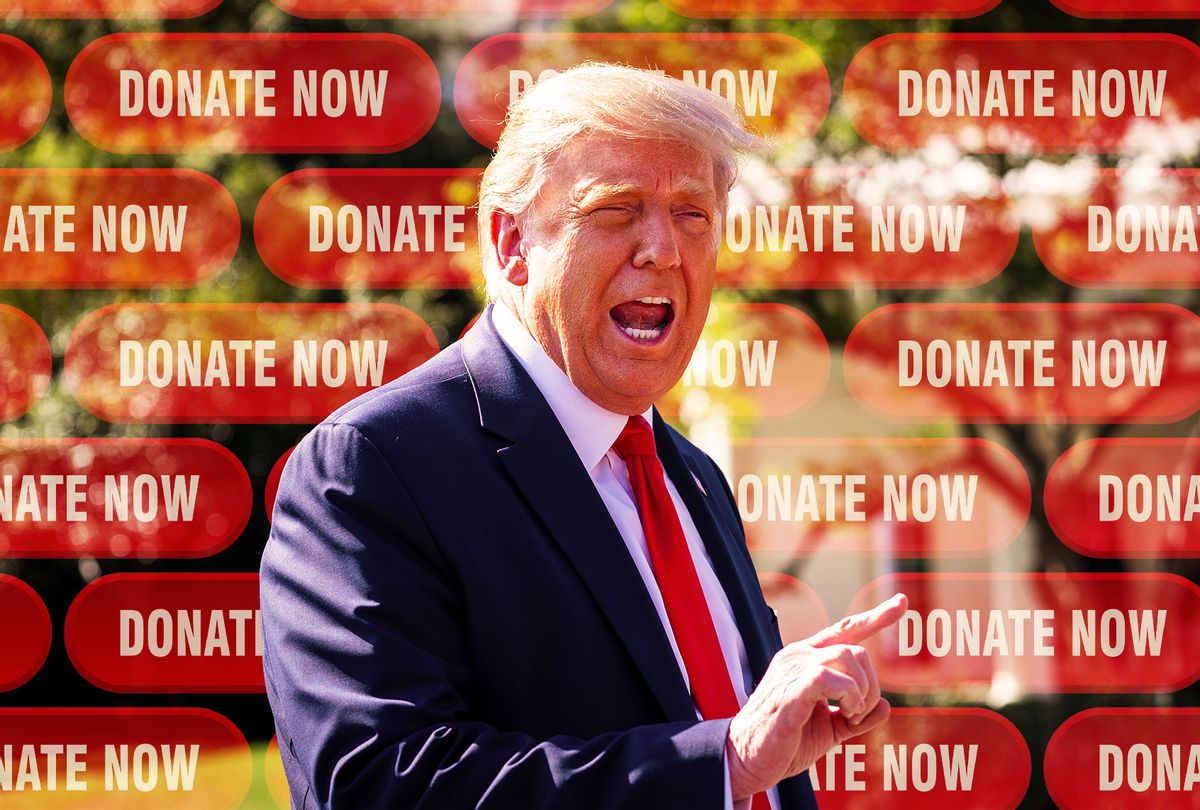 Instead of apologizing for a report that it was forced to issue refunds for thousands of dollars in donations, the main online platform for Republican Party fundraising is at it again, utilizing deceptive practices to threaten Donald Trump voters into continuing donations.

On Saturday, in a bombshell investigation, the New York Times reported that Donald Trump's presidential campaign ran an "intentional scheme to boost revenues" by duping its contributors into paying recurring online donations. According to the report, the Trump campaign employed a series of pre-checked boxes and inscrutable fine print that allowed the former President to snooker his most loyal but unsuspecting fans into donating ever-increasing amounts of money as the campaign dragged on.

So far, the Trump campaign has issued about 530,000 refunds totaling to $64.3 million, KUTV reported. However, the total amount swindled by the campaign is likely far greater. The story stretches back to March 2020, when the Trump campaign set up its first pre-checked box on its donation page via WinRed, the for-profit company that facilitated the campaign's donations. The box established monthly recurring donations until 11/3 –– a day after Election Day. As summer rolled around, however, and the Trump campaign found itself relatively cash-stripped with respect to its Democratic counterpart, so it added another pre-checked box –– this one more emotionally manipulative. The campaign also made its fine print increasingly Byzantine and easy-to-overlook. The result was that "contributors had to wade through a fine-print disclaimer and manually uncheck a box to opt-out." This second box, known as the "money bomb," doubled the donation amount and featured emphatic, all-caps text that encouraged supporters to contribute. It was shortly after this box was added in late May, as the Times reported, that refund requests soared.

By September, the Trump campaign had weekly recurring donations set up by default. At the time, banks and fraud companies were facing a deluge of complaints from customers about how they'd been unknowingly fleeced. Some donors, according to MSNBC, canceled their credit card accounts to quickly put out the fire.

WinRed has vehemently disputed claims of deception on their part, alleging that the "misleading" Times report is a "hit piece."

"Less than 1% of Trump campaign donations – 0.87% to be exact – were the subject of a credit card dispute. The Times fails to mention this until the 24th paragraph," it maintained. WinRed also made mention of the Democrats' fundraising tool, ActBlue. "The Times goes so far as to claim that ActBlue is 'phasing out' recurring, pre-checked donations boxes, but ActBlue was promoting recurring donations on their website as recently as March 5th, 2021. Even today, pre-checked boxes are featured on DCCC and DSCC ActBlue fundraising pages. It's not surprising, but the Times fails to mention any of this in their story."

But as Salon's Heather Digby Parton noted, "The refund request rate wasn't even close." In fact, "the Trump/RNC operation issued more online refunds in *December 2020* than the Biden/DNC operation issued in all of 2019 and 2020.'" Furthermore, WinRed kept its fees when people demanded a refund; Act Blue did not.

But some of WinRed's manipulative tactics are still being used by other Republican organizations looking to boost donation revenue.

The National Republican Congressional Committee (NRCC), which ensures Republicans are elected to the House, is using Trump-like pre-checked boxes with in-your-face rhetoric verging on emotional blackmail, according to MSNBC.

"We need to know we haven't lost you to the Radical Left," one pre-checked yellow box on the NRCC's website read this week. "If you UNCHECK this box, we will have to tell Trump you're a DEFECTOR & sided with the Dems. CHECK this box and we can win back the House and get Trump to run in 2024."

Fred Wertheimer, the president of Democracy 21, a non-profit that combats money in politics, told Insider that he'd "never seen anyone do what the Trump campaign just did."