Inside Camp Ashcan: The U.S. secret prison in Luxembourg that housed leading Nazis

Prominent Nazis were interrogated after WWII in a former luxury resort in Bad Mondorf, a spa town in Luxembourg 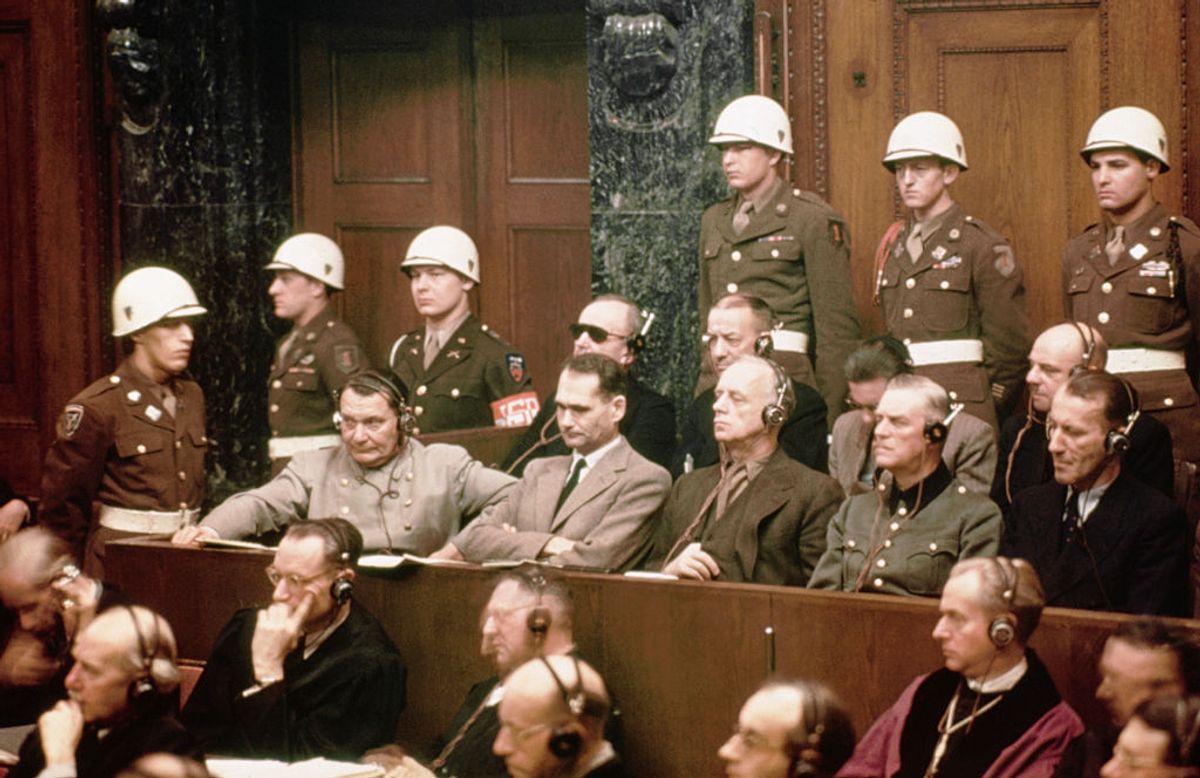 Prior to the famous trial in Nuremberg, more than half (13 out of 22) of the leading Nazis accused by the Allies as major war criminals were interned and interrogated starting in May, 1945 by the Americans in the Grand Duchy of Luxembourg. The secret prison in the spa town of Bad Mondorf was given the code name "Ashcan."

Bad Mondorf was within reach of General Eisenhower's forward headquarters in Reims in northern France, which was to coordinate the interrogation of the prisoners.

On April 30, the Americans took over the keys of the Palace Hotel in Bad Mondorf and began to convert it into Camp Ashcan. In the process, they had to reckon with liberation attempts by fanatical Nazis — as well as acts of revenge by Résistance commandos or the local population.

The center of Ashcan was the old Palace Hotel that had fallen into disrepair under the German occupation. With the help of German prisoners of war and local craftsmen, it was transformed into a prison with a high security fence and watchtowers.

The windows were barred and covered with Plexiglas. The hotel furniture in the rooms was replaced by basic military equipment with a cot, chair and two bed sheets.

Nevertheless, the hotel still looked like a luxury hotel from the outside. As it turned out, the concern of the inspectors sent by U.S. headquarters that high-ranking German prisoners of war were seeming to enjoy the luxury of a spa hotel was not unfounded.

In mid-May 1945, the camp was put into operation and the first prisoners were transferred to Bad Mondorf. On May 20, Hermann Göring, Hitler's deputy, was brought there. On May 9, he had surrendered to the 36th U.S. Infantry Division in Austria with his wife, daughter and some staff.

If Göring's capture had already caused a great stir, in Bad Mondorf, much to Eisenhower's dismay, he immediately advanced to the status of "star prisoner."

Drug-addicted and overweight, Göring brought with him in his seven suitcases not only large quantities of paradozin (a morphine preparation), but also a large number of valuables and uniforms, which were immediately confiscated.

Under the supervision first of a German and later an American military doctor, Göring was subjected to a drug deprivation cure. Thanks to the prison diet, which corresponded to the 1600 calories prescribed by the Geneva Convention for prisoners of war, he soon lost weight.

When Göring was transferred to Nuremberg in August 1945, he was in the best physical condition he had been in for years.

The prisoners took their meals together in the dining room of the former hotel and could spend their free time, when there were no interrogations, in the reading room or playing games. Many sat on the terrace or in the garden on sunny days.

The accommodations were much better than in the normal POW camps, which particularly offended the Soviets, for understandable reasons.

Ready to take responsibility for their crimes?

In a report handed over to Stalin on June 30, 1945, the Commissar of State Security Serov wrote:

It turned out that the prisoners were staying in (…),one of the best health resorts. They lived in an excellently equipped four-story building. The windows had only weak bars. In this building, each prisoner has his own room with a good bed and other amenities of everyday life. The isolation of one from the other is only limited, because in the course of the day they have several opportunities to meet each other for meals, but also during a game of chess or other games. None of the interrogated persons gives the impression of a prisoner who is ready to take responsibility for his crimes. They all look good and are tanned like spa guests. All dressed in full uniform, with degree badges and the swastika.

Even so, quite a few of the prisoners complained about the accommodation, the food or generally about their "status," and took it upon themselves to write letters to General Eisenhower, Prime Minister Winston Churchill and President Harry S. Truman.

Eisenhower gets the blowback

It was all in vain. U.S., British and French media had reported that the internees were being treated unduly courteously. This earned Eisenhower fierce criticism.

The prison authorities attached great importance to the health of the prisoners and took measures to prevent them from evading their responsibility in court by committing suicide.

To prevent suicides, there were no shoelaces or belts, no knives or forks for eating — and even glasses could only be worn in the reading room under supervision.

The inmates fell into three groups: The first consisted of the high-ranking generals such as Wilhelm Keitel, Albert Kesselring or Alfred Jodl — as well as the admirals Dönitz and Gerhard Wagner.

The first three were particularly close to each other, while Dönitz often acted as spokesman for the group and also claimed the first seat at the dining table for himself.

The second group consisted of politicians and civil servants. What this group had in common was that its members had no understanding of being interned at all. They were among the most difficult inmates and the busiest writers of complaints.

From this group, only the former Vice-Chancellor and diplomat Franz von Papen, who had also served as German military atttaché in Washington D.C., was tried and acquitted in Nuremberg.

The third group consisted of high-ranking Nazis, some of whom had already belonged to Hitler's entourage as "old fighters" from the 1920s onwards. This group also came together because the members of the other two groups avoided them.

One who would have fit into all three groups because of his many offices, but was not welcome in any of them, was Göring. But that did not stop him from acting as spokesman for the inmates at every available opportunity.

The Allies believed at the time that they did not have a sufficient understanding of the workings of the Nazi state and Nazi rule. The reason for the whole Mondorf exercise was that it fell to the 6824 Detailed Interrogation Centre (DIC) to learn more about the workings of the "Third Reich" from the prisoners in Bad Mondorf.

Five military intelligence officers, including Luxembourg native and later Ronald Reagan´s Ambassador to the Grand Duchy, John Dolibois, were stationed there and conducted their interrogations along questionnaires transmitted from Allied headquarters.

In addition, the U.S. War Department sent a commission of historians to interrogate the prisoners. They dealt with the structure and tasks of ministries and organizations as well as the financing of the Nazi state and the war.

Other interrogations concerned the use of foreign workers and the theft of art and cultural assets.

A third set of questions targeted the concentration camps and the murder of the Jews.

Finally, a fourth area of interest for the Americans related to the nuclear program. Dönitz confirmed that the "Reich" had also pursued such a program in 1943, but that it had failed for lack of resources.

He insisted to his American interrogators that everything must be done to prevent the Russians from gaining access to this destructive bomb.

The interrogations were more like a form of police questioning. The interrogating officers rarely followed up even on inconsistencies and obvious lies. There were also hardly any questions — in view of the upcoming trials — aimed at the inmates' personal guilt and involvement in the crimes of the Nazi regime.

Given all that, it was no real surprise that the prosecutors of the International Military Tribunal in Nuremberg (IMT) dismissed the interrogation protocols from Bad Mondorf as useless. Camp Ashcan had failed due to "indecision, lack of imagination and training" of the interrogators.

Moreover, the Allies had discovered large quantities of files in caves and mines during the summer, so the IMT decided to base the indictments on these documents signed by the accused rather than on witness statements as originally planned.

At the end of the war, the Allies had not yet agreed on what to do with the Germans who were considered major war criminals. The victors were hardly prepared for a legal reappraisal of the war and Nazi rule.

FDR and Churchill decide on a trial

It had taken Roosevelt and Churchill, who both just like Stalin initially envisaged a simple execution of the main war criminals, to agree on a trial. It was not until the London Four-Power Conference — which lasted from June 26 to August 8 — that agreement was reached on the charges and the London Charter signed there established the IMT.

Nuremberg not only had an intact courtroom and prison, it had also been the city of the Reichsparteitag (Reich Party Congress). There, the anti-Semitic racial laws (Nuremberg Laws) had been passed in 1935. As it was of great importance to the Nazis, it had been chosen for the trials.

The trial began on November 20, 1945 and was to last until October 1, 1946. Twelve of the accused, among them Göring, were sentenced to death by hanging.

Göring took his own life with a cyanide capsule the night before the execution. Seven defendants received prison sentences, three were acquitted, and in the case of two, the cases were dropped.

One more episode about Camp Ashcan bears highlighting. On August 10, 1945, Lieutenant John Dolibois had escorted the prisoners in a convoy of six ambulances from Bad Mondorf to the court in Nuremberg. In his truck were Dönitz and Kesselring, among others. Dolibois wrote:

As the convoy moved from Luxembourg across the Moselle into Germany, near Trier, the nervous chatter of my passengers came to an abrupt end. Through the rear window of the ambulance they could see what their glorious Third Reich now looked like. A large portion of Trier lay in total ruins. For the high-ranking Nazis in our ambulances, this was the first look at the condition of their country, the destruction that was the aftermath of Hitler´s determination to fight to the last man. They were shocked, speechless; one sobbed unashamedly. The rest of the journey went on in silence.

Camp Ashcan was closed on August 12, 1945. The Palace Hotel later resumed hotel operations and was also used as a casino.

In 1988, it was demolished. Luxembourg thus lost a historical monument, but also removed a potential place of pilgrimage for neo-Nazis.