Sure they’re comfortable, but those leggings and sports bras are also redefining modern femininity 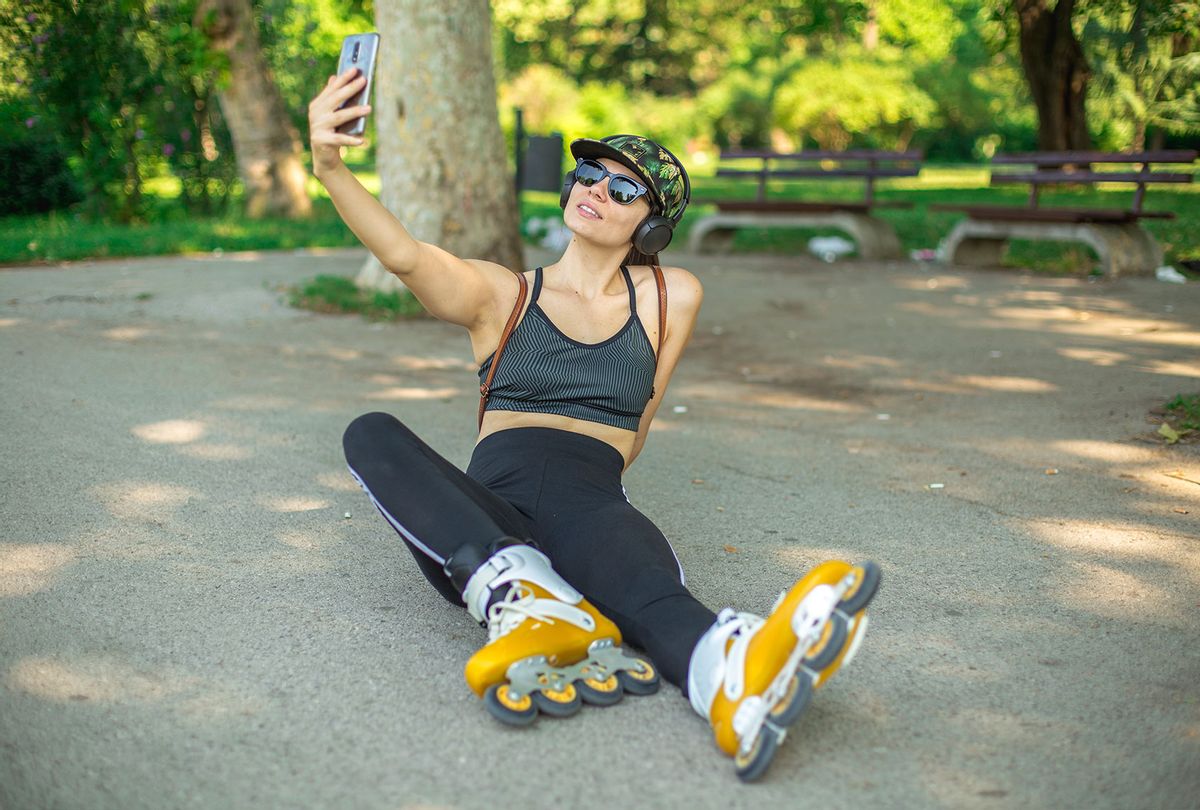 Woman takes a selfie on a break from rollerblading (Getty Images)
--

As fashion trends go, the move of activewear from gyms and fitness studios into mainstream society has been impossible to ignore. Like it or not, we live in a lycra world.

Tight-fitting leggings, yoga pants, sports bras and crop tops are everywhere from the catwalk to cafes. COVID-19 accelerated the trend, with working from home driving a recent surge in sales.

But the activewear industry has been growing exponentially for the past ten years. While the clothing is made for men and women, it is the women's market that has driven this phenomenal growth.

The trend has been widely celebrated, criticized, parodied and sometimes dismissed as simply the latest fashion trend in a society obsessed with conspicuous consumption.

On closer examination, however, activewear plays a fascinating role in 21st-century gender definitions, reinforcing and resisting popular ideas about femininity.

The rise of "fit femininity"

Walk through any activewear store and you will be bombarded with empowerment and self-help rhetoric emphasizing the importance of achieving a fit, healthy lifestyle with the right outfit and a positive attitude.

Various scholars have shown how large activewear companies use this type of language — "get moving" and "this is not your practice life" — to reinforce the notion of women's responsibility for their own body maintenance, regardless of any social or personal barriers.

Others have shown how activewear companies' marketing approaches encourage women to use physical activity as a means of self-transformation and a pathway towards a more fulfilled life.

It's a version of femininity based on a woman's consumption and the ability to maintain her own health and appearance. As feminist sport scholars have shown, society celebrates women who are "in control" of their bodies and active in their pursuit of femininity and health.

In our own research, we argue that wearing activewear in public is a way of saying "I am in charge of my health" and conforming to socially acceptable understandings of femininity.

In this sense, activewear (not to be confused with its less sporty "athleisure" offshoot) has become the uniform of what we might term the "socially responsible 21st-century woman."

Part of the appeal of activewear is that it is comfortable and functional. But it has also been designed to physically shape the body into a socially desirable hourglass female form.

High-waisted leggings that sit just above the navel are marketed as having a slimming effect. They are also often promoted as "butt sculpting," creating the desirable "booty" that has become valued (somewhat problematically) in mainstream culture.

As some have argued, this is yet another example of the appropriation of Black and Hispanic cultures for corporate profit.

With new materials designed to accentuate (not just support) particular aspects of women's bodies, activewear helps promote the idealized female form as being curvy but fat-free.

And while this idealized form has changed over recent decades — from thin, to thin and toned, to the toned hourglass — the current ideal remains largely unobtainable for most women.

But there is another side to this phenomenon. We wanted to explore women's own experiences of wearing activewear. Interviewees of different ages, body types, ethnicities and cultures spoke about activewear as being not only comfortable and functional, but also liberating.

From corsets and long dresses in the Victorian era to the high heels of the 1950s "housewife," the latest beauty and clothing trends have often constrained women's bodies and movements.

But the women in our research group talked about the freedom they experienced in being able to move comfortably through the day, from work to school pick-up, from the gym to the cafe.

Even so, not all activewear-clad bodies are considered acceptable. Some, particularly larger bodies, are stigmatized and criticized when they don't meet the feminine ideal.

Some even experience physical abuse or verbal harassment for wearing the "wrong" clothing in public. It's all part of a long history of social attempts to regulate women's bodies.

In response to these limited definitions perpetuated by the activewear industry, some women have established their own labels. In Aotearoa New Zealand these include the increasingly popular Hine Collection.

Founded by a Māori woman frustrated by the limited sizing of activewear, the brand features larger-sized models and caters to women of diverse body shapes and cultures.

Activewear has even been worn in protest against the policing of women's bodies in public places such as schools, churches and shops where the wearing of leggings has been deemed not respectable and too distracting for men.

In 2018, there was outrage when young track athletes in New Jersey were told they couldn't train outside in their sports bras when the male football team was practicing.

Other protests and writings have made leggings and sports bras symbols of pride and a challenge to those who seek to dictate women's bodily choices.

Most women, however, choose activewear simply because it gives them the ability to move with purpose and comfort throughout their day. While this might not be an overtly political act, it is nonetheless a subtle statement that women are not going to be controlled or objectified. They have pride in their moving bodies.

Activewear is far from a mundane clothing choice. Rather, it contributes to our definition and understanding of femininity and gender in the 21st century.