"All he did was have air fresheners in the car," Wright's mother told reporters on Sunday 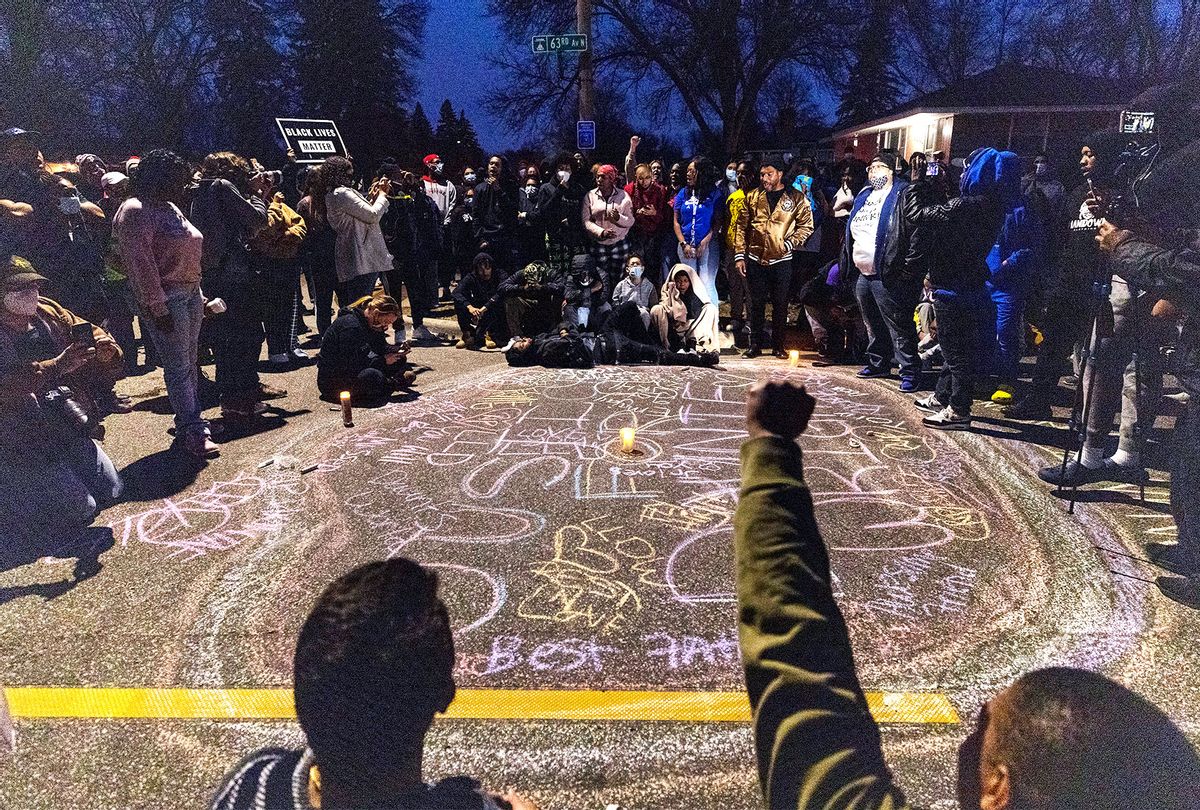 A crowd formed a circle around a memorial for Daunte Wright in Brooklyn Center, Minnesota. (Carlos Gonzalez/Star Tribune via Getty Images)
--

On Sunday, Daunte Wright, a 20-year-old Black man, was shot by a police officer during a traffic stop in the small Minneapolis town of Brooklyn Center, over air fresheners hanging from his rearview mirror, according to what Wright told his mother, Katie Wright, on the phone before perishing at the scene of the shooting.

"All he did was have air fresheners in the car, and they told him to get out of the car," Wright told The Star Tribune on Sunday. "During the call, she said she heard scuffling and then someone saying 'Daunte, don't run' before the phone call ended. When she called back, her son's girlfriend answered and said Daunte had been shot," The Tribune further reported.

But police following the incident had a different story as to what occurred on the scene. "Police said they tried to take the driver into custody after learning during a traffic stop that he had an outstanding warrant. The man got back into his vehicle, and an officer shot him, police said. They said the man drove several blocks before striking another vehicle," CNN reported.

Following the shooting of Wright on Sunday, hundreds of demonstrators took to the streets where they protested Wright's killing at a Minneapolis police officer's hands, with some demonstrators clashing with police.

Current scene in Brooklyn Center yards away from where family members say a 20yrold Black man was killed by an officer during a traffic stop this afternoon. @MPRnews pic.twitter.com/erF3eONgUr

"Are we at war?!" A protester yells as flash bang grenades explode around us. "Feels like we at war." pic.twitter.com/lT8xS4HWro

During a Monday afternoon press conference, Brooklyn Center Police Chief Tim Gannon spoke to the incident that left Wright dead and showed the graphic police body camera footage captured on the scene. "As I watch this video and listen to the officer's commands, it is my belief that the officer had the intention to deploy their taser but instead shot Mr. Wright with a single bullet," the police chief declared. "This appears to me, from what I viewed, and the officer's reaction in distress immediately after, that this was an accidental discharge that resulted in the tragic death of Mr. Wright." After Gannon's brief remarks, the lights were turned off, and the heart-wrenching body camera footage was played.

One officer can be seen in the video handcuffing Wright before another officer yells "taser" numerous times before taking out a handgun and shooting Wright.  "Oh sh*t, I just shot him," declared after shooting Wright, after the white car rolls away with a fatally shot victim. Gannon added at the Monday presser that the killing was "an accidental discharge that resulted in the tragic death of Mr. Wright."

The shooting comes as Minneapolis grapples with Derek Chauvin's trial after the police officer killed George Floyd in May of 2020. Minnesota Governor Tim Walz, on Monday afternoon, stated: "We can stop pretending that this is just the natural order of the universe and things happen this way."

"We can stop pretending that this is just the natural order of the universe and things happen this way." pic.twitter.com/kzfGJj2zgw

The governor added, "There's proven remedies that can be put into place. But that will never happen if we don't at least hold hearings on these things. If we don't at least get ourselves into an uncomfortable position and do what this democracy is supposed to do and debate the hard things."