My parents were addicted to heroin, and I had a happy childhood. Both of these things are true

As a child I didn't see or understand the danger in my father's life. I was just happy to spend time with him 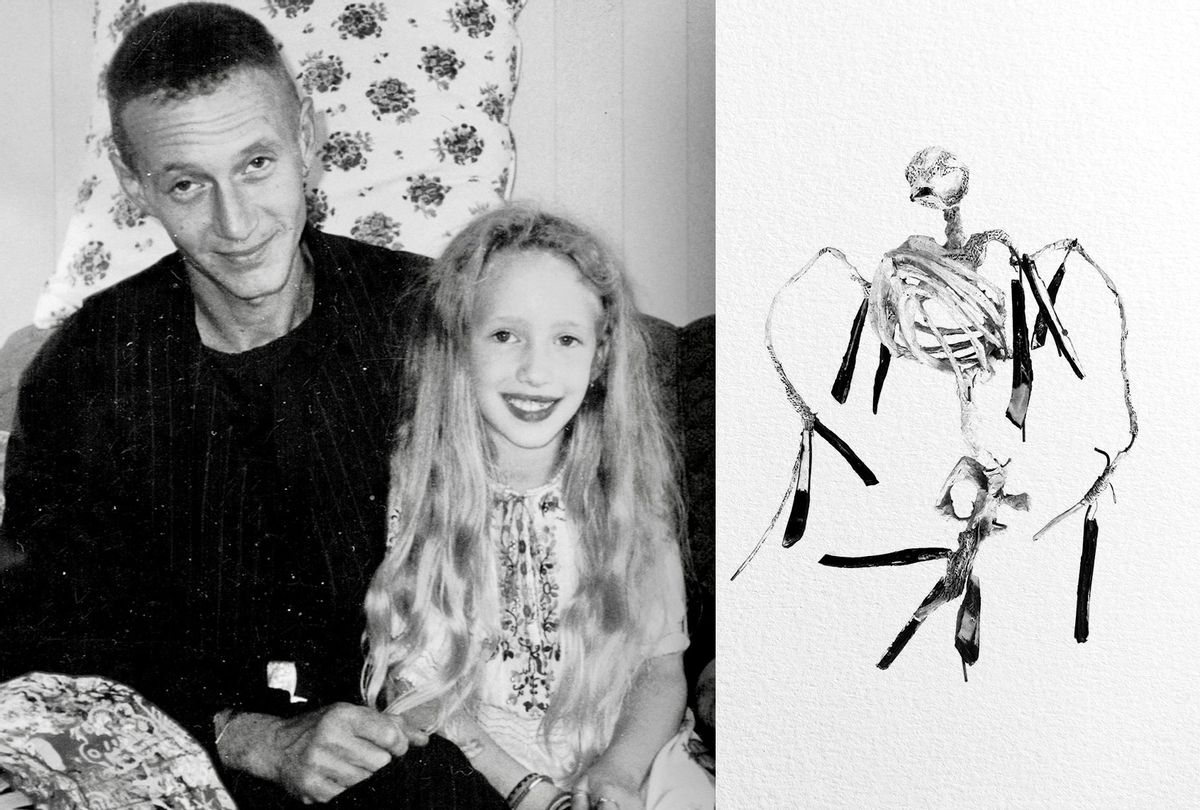 Excerpted from the memoir "Negative Space" by Lilly Dancyger, forthcoming from the Santa Fe Writers Project.

After my mother and I moved out, my father couldn't afford a place of his own with his income divided between child support (when he paid it) and heroin, so he slept on a lot of couches. One of those couches belonged to Audrey, a friend of his from Academy Studios where they worked together making natural history museum displays and carpooled from San Francisco to the studio in Novato, about an hour drive.

I liked Audrey when I was a kid. She had short red hair and a big black poodle named Lucifer and lots of stuff in her apartment was bright pink and lime green. I hadn't seen her since the day before my father's funeral, when I was 12 years old, hiding in her bedroom from everyone's whispers. When I was in my early 20s, doing research for my memoir, I called Audrey and asked her to tell me what she remembered about my father. She told me about the carpool, about how my father was the only member who never took a turn driving. He didn't have a car or a license, so really he just hitched.

Audrey remembered how bad he smelled then, with his addiction worse than ever and no wife around to beg him to clean himself. He didn't bathe or change his socks, and his teeth were turning brown. She said other people in the carpool pushed her to tell him he had to start bathing or stop riding with them. She brought it up with him a few times and he just shrugged and mumbled. He didn't care at all what people thought of him at work. If he hadn't showered to avoid repulsing the woman he loved, he certainly wasn't going to do it so his coworkers would have a more pleasant ride to work. He probably thought they were stuck up.

Audrey told me they fought a lot when he stayed with her. She didn't want him doing drugs in her house, and often noticed cash missing. "I was so furious with him when you were there over the weekends and I could tell he was high," she told me, her voice cracking a little.

She said that she was never sure if he actually liked her or if he just didn't want to have to take a bus to work every day. She was not holding back. She was telling me all the little angry private thoughts that she had then, that she'd held onto. She was telling me what she really thought of my father, like I'd been trying to get everyone I'd interviewed to do. But now I felt defensive of him, suspicious that she was exaggerating, romanticizing the idea of having known a junkie once in her own artist heyday.

Audrey described what she called his 'lair,' a little hovel tucked away in the corner of the Academy Studios warehouse where he would collect scraps of leftover materials and periodically hide to work on his own projects.

"He treated it like his personal art supply store," Audrey said. "He stole so much stuff!"

He used to smuggle out supplies for us to play with: little Ziploc bags full of incredibly lifelike fake eyes, plaster molds of lizard scales, scraps of fake fur. It was one of the things that made him magical: pockets always full of treasure.

Audrey was convinced that if anyone else had collected piles of trash in the work site and then disappeared in the middle of the day to play with them, they would've been fired. She thought the bosses must've known he was doing heroin at work but looked the other way because sometimes when he was high he would just put his headphones on and draw, focusing more completely than anyone else there. And he did such beautiful work.

Audrey choked up as she told me about the time she finally got up the nerve to ask him something she'd wondered about for a while.

"I looked right at him," she said, "and I asked if he ever made art when he was sober. His eyes went down to the ground, then up to the sky. Eventually he said 'no.'"

After I hung up the phone with Audrey I laid on my bed for a long time. I stared up at the papier-mâché bird skeleton sculpture, one of my favorite pieces of my father's artwork. It's made of pages ripped from my father's notebooks, so his words spiral around the bird's ribs, mirror-shard feathers hanging off of it like voodoo icicles. I stared at it, Audrey's words replaying in my head, thinking about whether it was true that his art was inextricably tied to his addiction; that this part of him that I cherished so much, that I clung to, was a byproduct of what killed him.

I thought, for the first time, about what it would have been like if he had lived and kept using. In all of my imagined scenarios of what it could have been like if he'd lived, I had always imagined him clean and healthy. My mother has kept that part of her life behind her, and I always took it for granted that he would have, too, if he was still here. But if he couldn't make art without heroin, there's no way he would have stayed clean.

If he'd lived, would I have ended up another name on the long list of people whose couches he claimed for a little longer than he was welcome, covering them in sawdust, filling the room with his stench? Would he have stolen from me? Would I have let him get away with it? I've never doubted that my life would be better if he was still here, but I started to wonder about the different ways his presence could have hurt me almost as much as his absence.

It was horrible to think about, this alternate reality where he lived and I grew to hate him. I looked up at the bird skeleton and I was momentarily disgusted by it.

But then I snapped out of it.

There may have been a period in my father's life, at the depth of his addiction, when he honestly believed that he couldn't make art without heroin. He may have told Audrey as much. But it was bullshit. And if he had lived, I would have told him it was bullshit. Artist was so much closer to the core of him than junkie. The ideas, the images, the symbols, the skill all came from him, from his brilliant mind. They weren't injected into him along with the drugs. Heroin might've helped him get into the mind-state to make art, it might have slowed his demons down enough that he could catch them and turn them into sculpture, but he would have found another way into the work.

Another thing Audrey said that struck me as strange was, "I hope you have some positive memories of him." It took me a moment to realize what she meant, because I have almost exclusively positive memories of him. I have the fondest memory of playing catch in the hallway of the Donnelly Hotel, an SRO on Market Street where he lived after he burned through the friends who were willing to let him crash on their couches. The carpet was the color and texture of fungus, the lighting was dim, the ancient wallpaper peeling off in strips. My father stood at one end of the hallway, next to the reception desk, which was surrounded with bullet-proof glass. I stood at the other end, near the stairs that led up to the rooms that could be rented by the hour, night, or week.

I was nine, and completely unfazed. As we tossed the tennis ball back and forth, my father would make exaggerated sounds of strain as he lunged to catch my "fastballs," and cheer me on when I caught his. It was our version of the most wholesome trope there is.

"I was ready to fucking murder him," my mother said, still fuming almost twenty years later about the time he left me alone in his room there. "It was a fucking crack hotel! Who knows what could have happened."

At the time, I wanted every last moment I could get with him, and I didn't care what her reasoning was for not wanting me to stay there. I didn't care that the light bulbs in the hallways buzzed and the room smelled funky and there were sometimes people slumped over, nodding out in the hallways. Her anger makes sense now. I wouldn't want any kid of mine (or even any friend of mine) to stay in a place like that. But as a child I didn't see or understand the danger, I was just happy to spend time with my father.

I have my father's soft and faded Sun Records shirt that still, after all these years, smells like him. Sometimes when I'm really missing him, I bury my face in that shirt and take a deep breath. To me it doesn't smell like a junkie, but like my Papa.

After talking to Audrey and my mother about how strung out and filthy he was then, when he didn't look out of place at the Donnelly and smelled so bad people didn't want to be in a car with him, I took the shirt out of my drawer and held it up to my nose. I wondered if these new images of the man who wore it would change how I felt about the smell, picturing other junkies I've known in my life and the putrid stench that comes from rotting from within and being too high to clean yourself. I balled the shirt up and stuck my nose in it, taking a deep breath. Then I breathed in even deeper, trying to get as much of the smell as possible as I was flooded with memories of running to hug my Papa at a bus stop after I hadn't seen him in weeks, of sitting in his studio with him while he told me stories about his favorite painters and we giggled about puns, of lying with my head on his chest, the rise and fall of his breath rocking me to sleep as he read me Greek myths.

I may have been able to learn more about who he was as a man, but even the ugliest truths wouldn't change who he was to me as my father. Regardless of what was going on in those rooms, the hallway of the Donnelly Hotel was great for a game of catch. And that smell that repulsed everyone else triggers only happy memories for me. I keep the shirt wrapped up tight to preserve the smell, but I wish I could use it as a pillowcase and bury my face in it while I sleep, to dream of my father.

Lilly Dancyger is the author of Negative Space, a reported and illustrated memoir selected by Carmen Maria Machado as a winner of the Santa Fe Writers Project Literary Awards; and the editor of Burn It Down, an anthology of essays on women’s anger. Find her on Twitter at @lillydancyger.