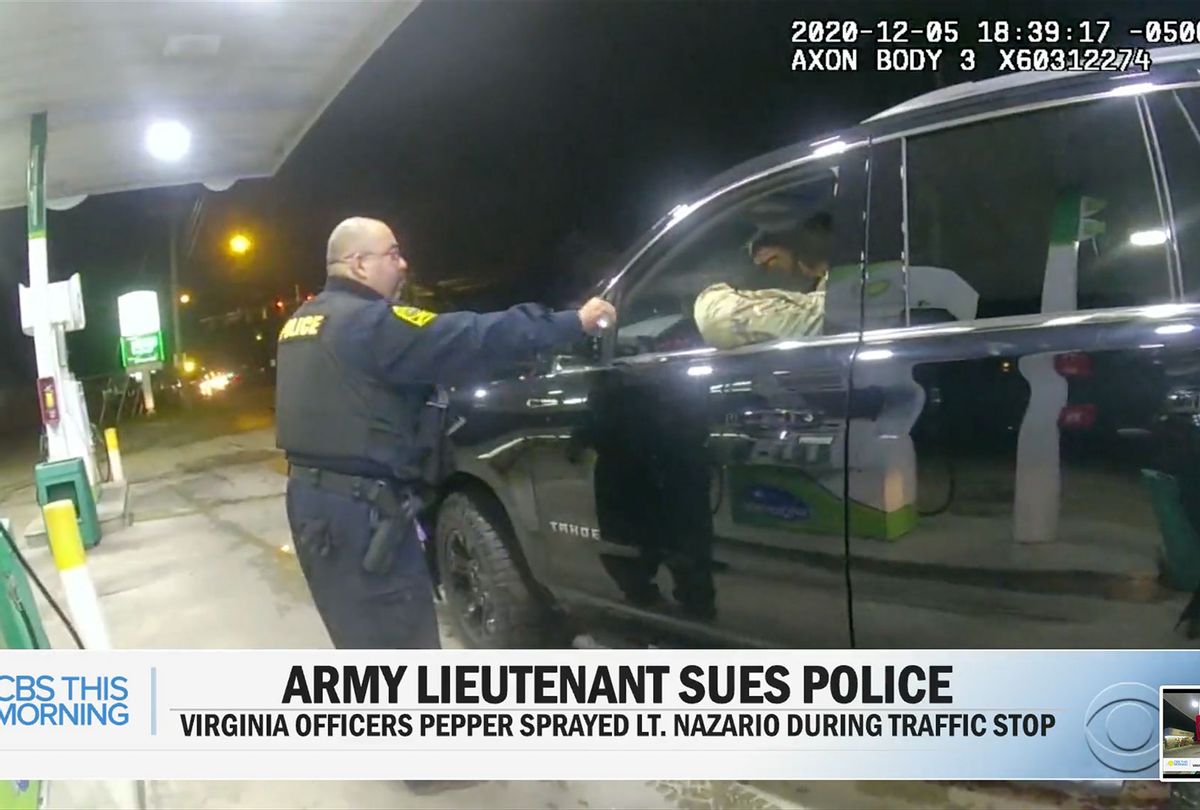 One of the Virginia police officers accused of pepper-spraying, arresting, and pointing guns at an Army officer has been fired after an internal investigation, officials said on Sunday.

The incident, captured on video in Windsor, occurred on Dec. 5 of last year, and involved officers Joe Gutierrez and Daniel Crocker, who pulled over Second Lt. Caron Nazario, a Black and Latino Army officer. The officers believed that Nazario was missing a rear-end license plate, according to a Windsor Police Department police report. It was later found that Nazario has a temporary plate taped to his rear window.

Crocker detailed in the report that he believed Nazario was "eluding police" at a "high-risk traffic stop." But in his $1 million lawsuits against the two officers, Nazario argued that he had put his turn signal on and continued to drive slowly under a mile until he could find a safe place to park.

The Army officer eventually parked a BP gas station, where both officers already had their guns withdrawn as Nazario set up his cellphone to videotape the engagement. Nazario asks the officers, "What's going on?"

Nazario, raising his arms, refused to exit his car without being told more information about why he was pulled over. According to one of Nazario's attorneys, Gutierrez can be heard in the video telling Crocker that the Army officer was "fixin' to ride the lighting," a colloquial expression alluding to execution by electrocution.

Nazario, who expresses he is afraid to exit his vehicle, is eventually pepper-sprayed in the eyes, after which he struggles to exit. "Why am I being treated like this? Nazario asks the officers, expressing that his dog may have been affected by the pepper spray.

Gutierrez tells him, "Because you're not responding." They subsequently pin Nazario to the ground and arrest him. Arthur was later released and did not face any charges.

The town of Windsor joined demands from election officials for a thorough probe into the incident by the Virginia State Police, according to AP News. On Sunday, Windsor officials revealed the investigation's ultimate conclusion that police procedure was not followed.

"The Town of Windsor prides itself in its small-town charm and the community-wide respect of its Police Department," the town's statement said. "Due to this, we are saddened for events like this to cast our community in a negative light. Rather than deflect criticism, we have addressed these matters with our personnel administratively, we are reaching out to community stakeholders to engage in dialogue, and commit ourselves to additional discussions in the future."

Virginia Gov. Ralph Northam tweeted on Sunday that he found the video "disturbing."

In his lawsuit, Nazario argued that the incident is "consistent with a disgusting nationwide trend of law enforcement officers, who, believing they can operate with complete impunity, engage in unprofessional, discourteous, racially biased, dangerous, and sometimes deadly abuses of authority."

His attorney Jonathan Arthur, told CBS, "We must consider steps to decertify officers that engage in this behavior, so that they cannot seek employment with other law enforcement agencies."

He continued, "Additionally, the law enforcement community has to consider seriously the failure of officers like Daniel Crocker to promptly intervene to end an unjust police-civilian encounter as it unfolds. Too often, officers will support their colleagues, right or wrong, at the cost of innocent citizens."