A $5 item from Big Lots was actually a big purchase for my mother to afford. What did she see in that birdhouse? 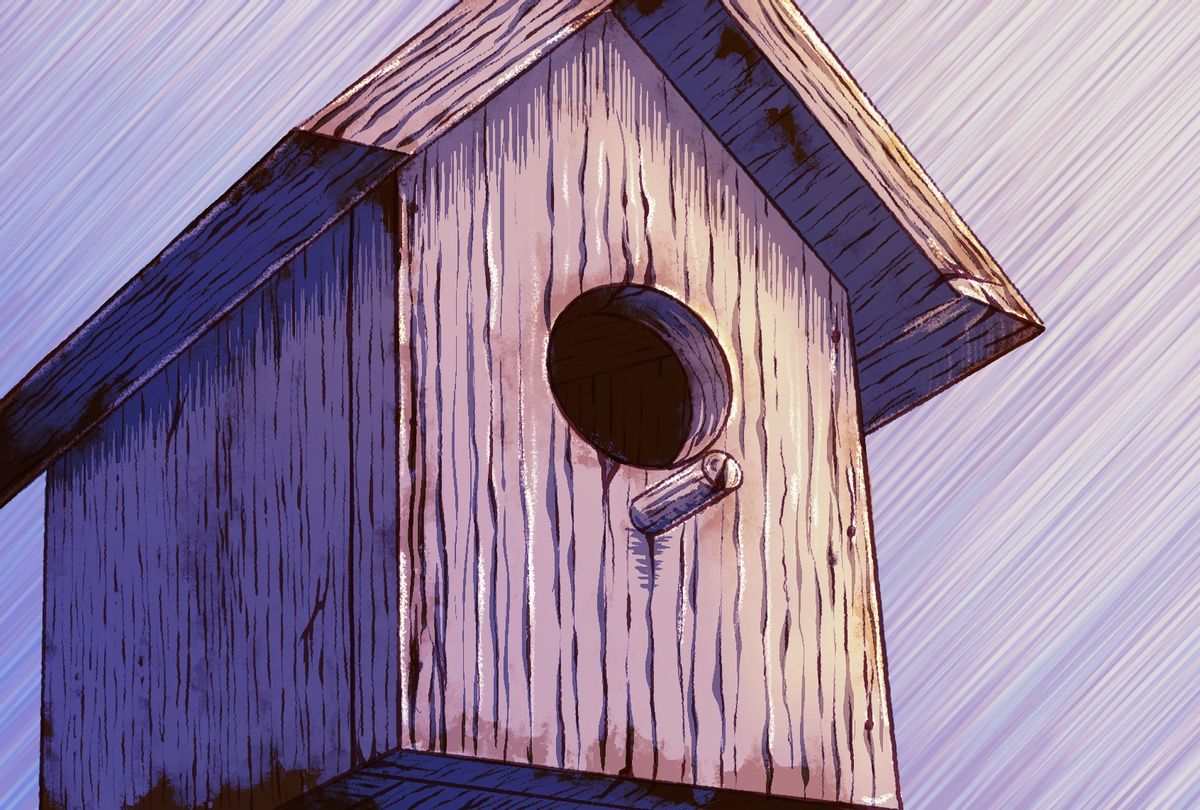 A few years ago, I built a writing studio in my backyard. One hundred square feet, four windows and a door. I painted it gray to match the main, bigger house, dragged in a couch and a desk, put up some shelves that I filled with books, a lamp, and a small birdhouse my mother had given me that had been too long in the elements. When I picked up the birdhouse, a nail slipped out and a roof slat fell off. Exposure had left it fragile as an egg shell and I worried that if it fell to pieces, I could never put it back together. The delicate structure would never withstand the tapping of a hammer, so I pushed the nail back into place with my thumb and it seemed to hold.

It meant nothing to me when my mother gave it to me. Just another trinket, a too-late expression of what? An apology, a token of love? We'd been so long estranged that at times it annoyed me to see the thing sitting out there next to a potted plant on the deck. I kept it all these years even though birds never used it.

She was so excited when I told her I had finished my first novel. She said she had always wanted to be the mother of someone famous. Immediately, I was annoyed. That wasn't why I was writing. I wanted to be heard, to process the world around me and get it on the page. Once again, I felt the gulf between us grow. We were so unfamiliar with each other. We had never been close even when I was a child, but especially as a teenaged queer. Coming out at the age of eighteen completed the rift and as an adult I would go years without seeing her. But as the years passed, we each made efforts to bridge the differences between us; me the queer, her the devout Baptist.

Days before she died, she asked me to move her into a barn. She wanted a bed of hay and to smell the earthy things of this world, the ground beneath her, and fresh air on her skin. She settled for wheelchair rides beneath the shadow of the pines on the hospice grounds.

In her eulogy I chose to tell her favorite story from her childhood. She was thirteen, a hurricane was churning in the Gulf, headed inland, and there was a leak in the roof of her family's house. She was home alone with her little brother so she found some spare shingles, climbed to the top, and patched the roof. This is my best memory of her, even though I wasn't born for another seventeen years. Memory is what we claim as our own when there's not much else to grab. For a writer, memory is where story begins.

It can't be a surprise that I write from an outsider's point of view, instinctively gravitating toward characters that exist on the perimeters of society — loners, with limited resources, who have to be creative to get by and stay alive. From the beginning I've been drawn to explore the impact on familial relationships of societal influences such as poverty, religion, constricted gender norms. Images and dreams return me to this point of view every time.

My mother was born poor and she died poor. As a society, we like to imagine hardworking people rising above poverty. We want stories where the mother works two jobs but somehow keeps her kids' clothes clean and ironed. The mother in my story, Racine, works two jobs while raising a young son, oblivious to what he's experiencing at school and the event that brings them irreconcilable trouble.

A dream of my father emerging from death to hand me the reins of a reddish-brown horse appears in "Long Time Coming." A baby turtle crawling down a blacktop resulted in a mother-daughter exchange in "Low Tide." A single image of seahorses swimming in the Gulf of Mexico produced the story, "Lucky Girl." All of these stories began with pieces of dreams and memories that became short stories, which I explored on the page until they revealed elements of universal truth.

This birdhouse is gray and weathered. Its boards are so dried and split from years of sun and rain that its nails are rusted and loose. A five-dollar item from Big Lots was actually a big purchase for my mother to afford. What all had she seen in that birdhouse? What was she trying to say with that gift? The birdhouse sits safely on a shelf now, out of the wind and rain. It might fall apart the next time I pick it up, but if it does, I will fix it. It holds nothing. But somehow, it's holding together.

Gale Massey is the author of "Rising and Other Stories" (April 13, 2021; Bronzeville Books), and "The Girl from Blind River," which received a 2018 Florida Book Award and was a finalist for the Clara Johnson Award.

Her work has been featured in Lambda Literary, CutBank, CrimeReads, Sabal, the Tampa Bay Times, Saw Palm and Tampa Bay Noir. Gale was a Tennessee Williams Scholar at the Sewanee Writers Conference and a fellow at Writers in Paradise, and has served as a panel judge for the Lambda Literary Awards. She has been nominated for a Pushcart Prize in both fiction and nonfiction. You can visit her online at galemassey.com.