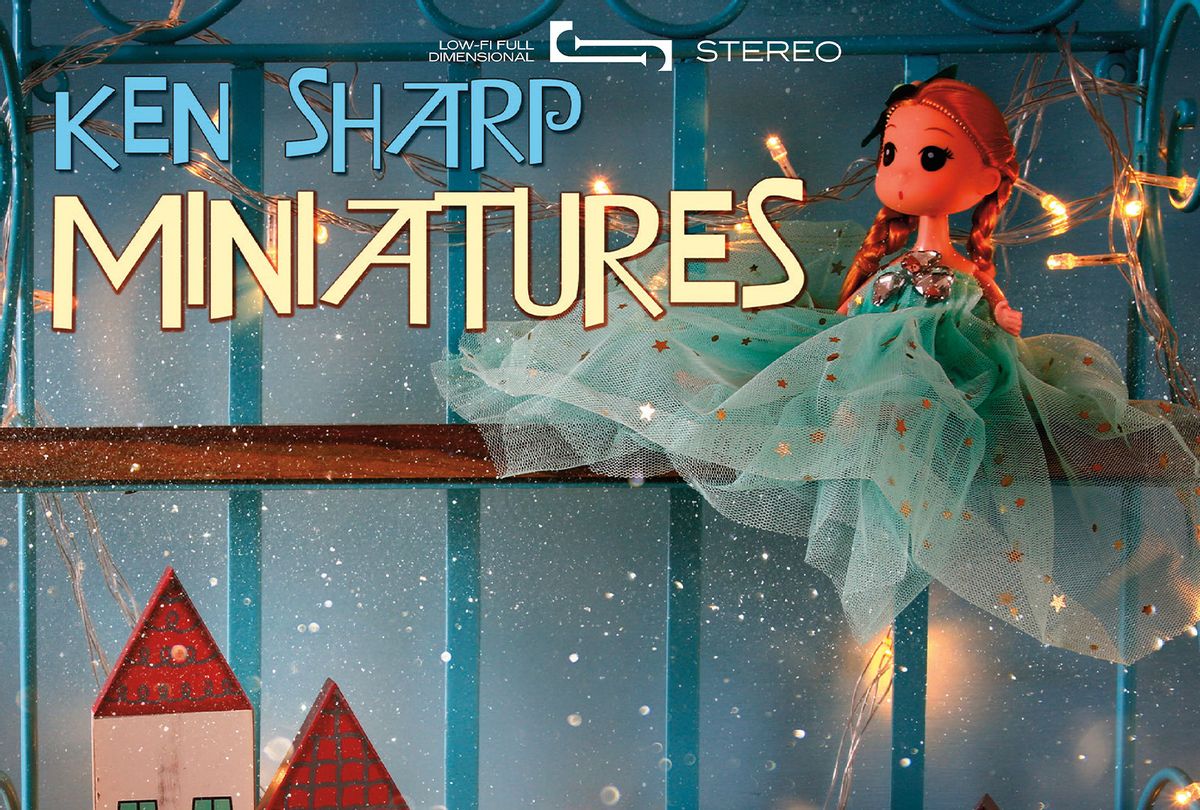 "Miniatures," the latest album from indie recording artist Ken Sharp, is a wonder to behold. Working from the ethic that "less is more," Sharp has crafted an album for our on-demand times, a record that rewards binge-listeners with an unforgettable song cycle overbrimming with joy, love and everything in between.

Comprised of 32 bite-sized tracks, "Miniatures" is delightfully difficult to pin down. When it comes to assigning genre, Sharp describes his creation as "baroque pop meets the folks effusions of Simon and Garfunkel, with the Beatles, Stevie Wonder, and the Latin lilt of Sergio Mendes & Brasil '66 thrown in for good measure." And the album is all of those things, to be sure. But as the blissful sum of its own parts, "Miniatures" is much more.

For the record, Sharp undertook a thought-experiment in which he produced an album of "miniature songs that take you into their world without overstaying their welcome." With the longest song "Rise" topping out at 1:57—making it the veritable "Hey Jude" of the collection—Sharp never strayed from this philosophy. After compiling a core selection of songs, he began writing and recording a new composition every day, not unlike the countless Internet diarists who mark each new sunrise with a selfie to document their lives in slow-motion.

In truth, such web-diarists inevitably accent life's mundane qualities. But when it comes to "Miniatures," there's nothing ordinary about Sharp's LP. Taking his concept fully to heart, Sharp produced the album entirely in his Encino apartment, performing all of the instruments himself, save for occasional guest appearances from multi-instrumentalist Fernando Perdomo and violinist Kaitlin Wolfberg.

In keeping with his principle of miniaturization, Sharp even took to recording the album on his iPhone, deploying GarageBand as his tiny mixing desk and utilizing the built-in microphone for his acoustic guitar and vocals. When it came to recording his electric instruments, Sharp used iRig 2 as his interface, resorting to an app when he wanted to reproduce the sound of, say, a mellotron, which he played on a keyboard—a little one, naturally, that he connected to his iPhone. But while the album may have been recorded in small, there's nothing miniature about the result, with some songs utilizing as many as 32 tracks and providing a feast for our earbuds generation.

Although the concept is intriguing in and of itself, a thought-experiment only genuinely works if it delivers in the execution. And "Miniatures" doesn't disappoint. From "Me & My Big Fat Mouth" through the title track that closes the album, Sharp transports the listener on an emotional, heartfelt journey through the joys and conundrums of our humanity.

In songs like "Susannah Silently Shining" and "Lorelei," Sharp deploys his unique brand of falsetto vocals and baroque pop in moving confections about the heart-rending nature of memory and nostalgia. Not surprisingly, it's the little things that come up trumps on "Miniatures." Most of the tracks are informed by Sharp's penchant for crafting exquisite interlocking harmonies. Take "Rise," for instance, with its soaring backing chorus that accents his buoyant, almost conversational lead vocals.

And then there's the quirky, inventive "When You Fall," with its whimsical electric guitar figures working in counterpart with Sharp's lyrics about the abiding exuberance of love and memory. Sharp draws his ideas from a range of source material, like the animated holiday classic "Rudolph the Red-Nosed Reindeer," the "Dollhouse" episode of The Twilight Zone, and even Ezra Pound's imagistic poetry — the diminutive, haiku-like pieces, of course.

Listen to Ken Sharp's "When You Fall":

The album also benefits from Sharp's playful sense of homage in such songs as "A Kind of Blue and Smokey Too," with its references to Miles Davis and Smokey Robinson. Which brings us to the album's most idiosyncratic cut, "Black Coffee, Cigarettes, and Bach's Minuet," a wacky samba concoction that name-checks Bach's "Minuet in G Major," the melodic source for the Toys' "A Lover's Concerto," a 1966 hit single and a personal favorite of Sharp's.

But Miniatures isn't all fun and games. In "You'll Be Known," Sharp eulogizes the life of Zak Nilsson, who recently lost his fight with cancer, while never losing his dignity along the way. Meanwhile, songs like "Down the Drain" amplify our shared sense of frustration during these pandemic days, when so often nothing seems to work in the face of so much loss, when our workaday lives seem overcome with futility.

As with pop music's finest albums, Miniatures reminds us, ultimately of ourselves. And for all of the joy and charm that Sharp packs into "Miniatures," the record, to the artist's great credit, is never cloying, only sincere. With his tiny snapshots rendered in miniature from a magical world, Sharp has produced a mighty achievement, indeed. Mighty like a rose.

Watch the premiere of Ken Sharp's "World of Wonder" video: