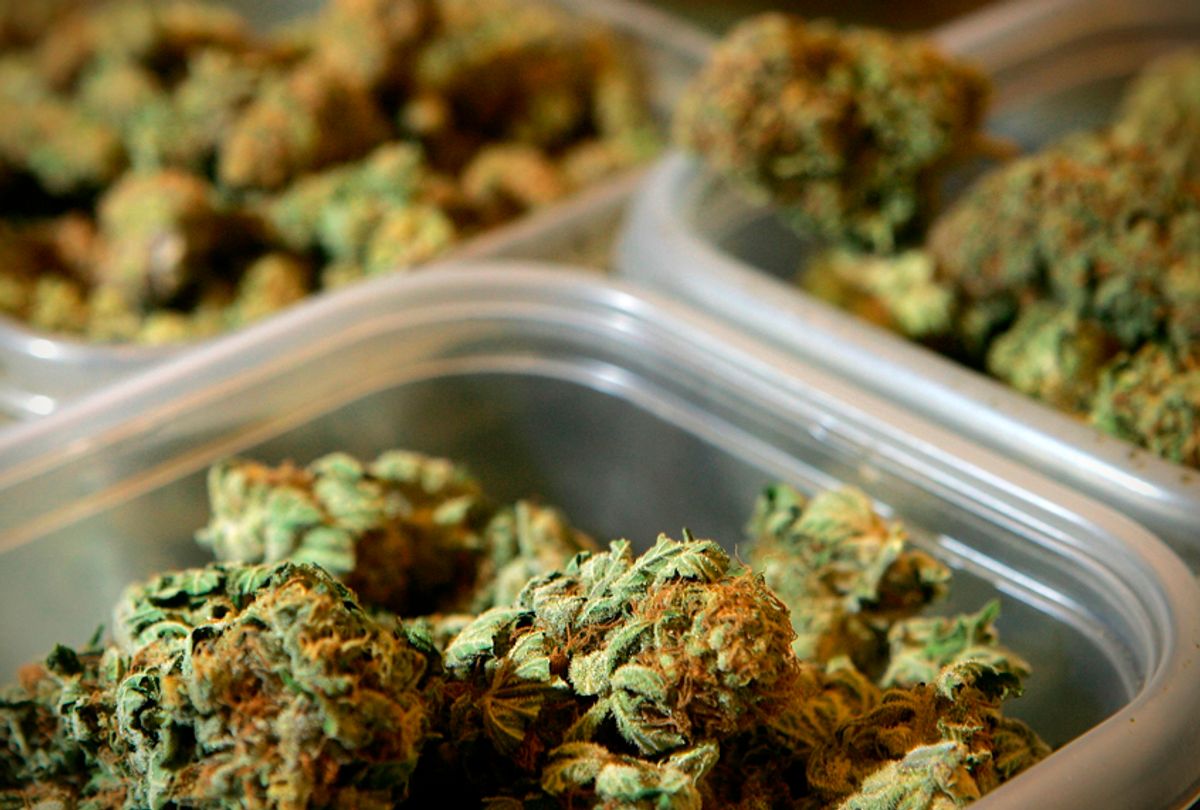 If you've bought marijuana products legally in the United States, you might be familiar with the regulatory labeling system, which features two three-letter acronyms accompanied by percentages: CBD and THC. Just as alcoholic drinks list their potency by denoting alcohol-by-volume (or ABV), both recreational and medicinal marijuana products list the amount of two different naturally-occurring chemicals, cannabidiol (CBD), and tetrahydrocannabinol (THC), as a means for consumers to gauge how high they do (or don't) want to get.

But while alcohol-by-volume is a fairly easy number to test, THC and CBD content aren't as simple. Now, a new study published in The Journal of the American Medical Association (JAMA) suggests that this labeling system could frequently be way off — giving consumers radically different psychoactive experiences than what they might be expecting.

"People are buying products they think are THC-free but in fact contain a significant amount of THC," said Jodi M. Gilman, PhD, the study's lead author and an investigator in the Center for Addiction Medicine at Massachusetts General Hospital. "One patient reported that she took a product she thought only contained CBD, and then when driving home that day she felt intoxicated, disoriented and very scared."

The crux of the discrepancy relates to these two naturally-occuring chemicals, CBD and THC. Because CBD has a reputation for being a non-psychoactive, "soothing" chemical, while THC is its psychoactive cousin, the listing system theoretically lets marijuana consumers decide what kind of high they prefer. Those who prefer cannabidiol (CBD) instead of the psychoactive compound in cannabis, THC, are often looking to experience a more soothing "high." On the other hand, THC connects with cannabinoid 1 receptors in the brain and can sometimes create unwanted psychoactive effects — the glued-to-your-chair, immobilizing kind of high.

Indeed, the JAMA study from Massachusetts General Hospital researchers found that many consumers who are told that they are taking CBD to help with anxiety, depression, pain or insomnia, are often actually consuming products with unwanted THC in them.

Researchers analyzed urine samples from 97 patients who enrolled in a clinical trial to study the effect of using medical cannabis for anxiety, depression, pain or insomnia. The researchers wanted to see if the products were delivering the expected ingredients to patients or if they were mislabeled.

According to the results published in JAMA Network Open, there was no CBD in about one-third of the urine samples from patients who said they were using products that were mostly CBD or were roughly half CBD and half THC. In total, THC was detected in 80 percent of those samples — which included people who thought they were only consuming CBD.

The participants reported that they were using products from licensed dispensaries within 48 hours. Vaping was the most common method reported of consuming CBD, and yet nobody who reported vaping had measurable cannabinoids in their samples.

"A lot of questions about the content of the products and their effects remain," said Gilman. "Patients need more information about what's in these products and what effects they can expect."

The findings are consistent with previous ones that hint at mislabeling. For example, one study published in JAMA Network in 2015, found that only 17 percent of 75 edible marijuana products were labeled correctly.

"These preliminary data are from a limited sample size and cannot be used to draw conclusions about the marketplace and supports the need for the long-term study, which will capture multiple retail sources (on-line and brick and mortar) and a greater number of products," the report concluded.

The FDA at the time emphasized that more testing is needed. But some experts have previously stated that the FDA needs to step in and regulate such products.

"The big problem, with this being something that is not federally legal, is that the needed quality assurance oversight from the Food and Drug Administration is not available," Marcel Bonn-Miller, PhD, an adjunct assistant professor of Psychology in Psychiatry at the University of Pennsylvania, said in a press statement previously. "So, right now, if you buy a Hershey bar, you know it has been checked over; you know how many calories are in it, you know it has chocolate as an ingredient, you know how much chocolate is in there. Selling these oils without oversight, there is no way to know what is actually in the bottle."

Correction: A previous version of this story stated: "For example, one study published in JAMA Network in 2015, found that only 17 percent of 75 edible marijuana products were labeled incorrectly." We meant "correctly."