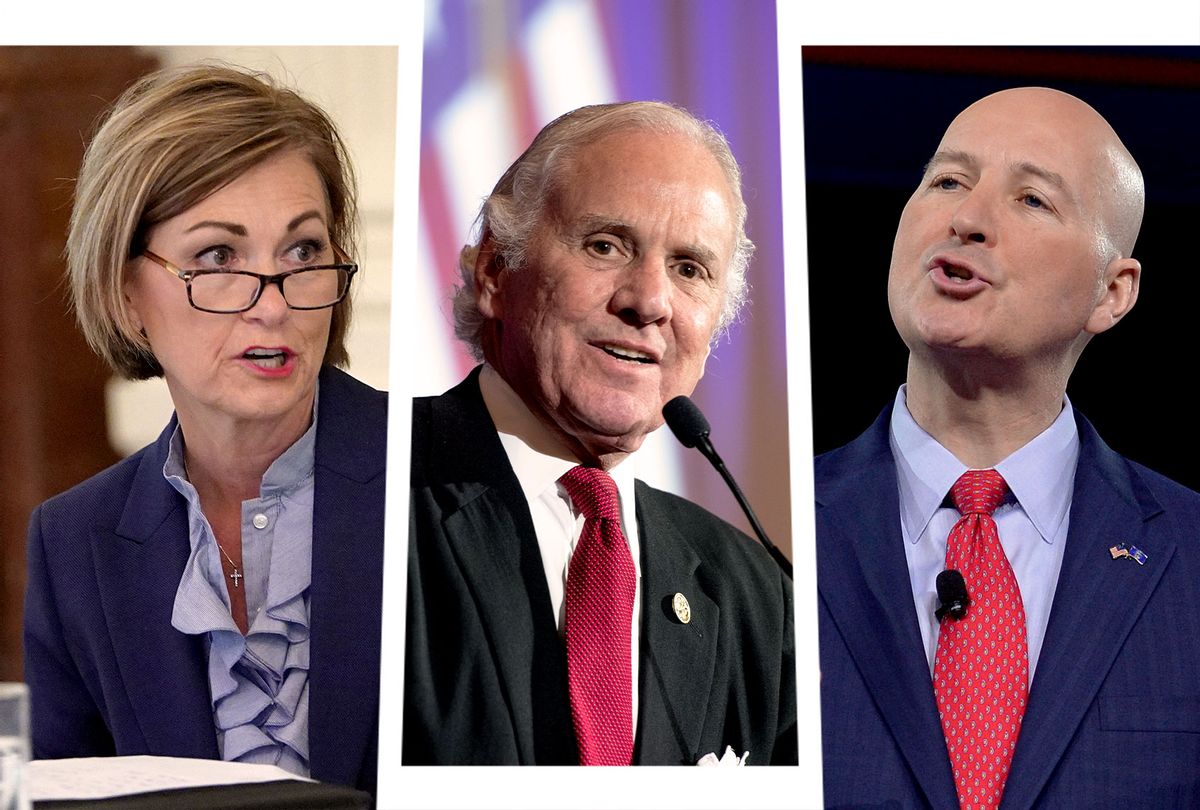 Amid the Congressional hysteria in Congress surrounding the purported "surge" of migrants at the U.S. southern border, GOP governors throughout the nation are declining to help those most vulnerable: child migrants. Republicans are rushing to reject migrant children in need of foster care in hopes of scoring political points.

On Tuesday, Nebraska Gov. Pete Ricketts, a Republican, announced that he would not comply with President Joe Biden's request to temporarily house displaced migrant children in the state, instead suggesting that the surge was a problem of Biden's own doing, according to the Norfolk Daily News.

"Nebraska is declining their request because we are reserving our resources for serving our kids," Ricketts said. "I do not want our kids harmed as the result of President Biden's bad policies."

"The Biden administration should focus on working with Central American governments to reunite the children with their families in their home countries instead of pursuing the risky strategy of scattering them across the United States," he continued, adding, "President Biden has created an immigration crisis on our border with thousands of unaccompanied migrant children coming to our country without their parents or family."

According to a New York Times estimate, the U.S. may see over 35,000 unaccompanied migrant children at the border by June. The number of minors currently in custody is approximately 20,000. Although a Washington Post fact-check found that the recent spike in migration at the southern border is consistent with a "predictable seasonal shift," the hike in migration by unaccompanied minors "appears to be more than just a seasonal pattern." The Post also found no evidence tying Biden's immigration policies to the overall surge.

Attorney Erik Omar, executive director of the Immigrant Legal Center in Omaha, told KETV7 that accommodating migrant children is not likely to deplete state resources for Nebraska-based children already in the foster care system. "The Ricketts administration statement about being a drain on state resources in our opinion was misleading," Omar explained. "All of these children aren't going to be released into brand new foster homes or things like that," he added. "On occasion, that does happen, yes. But, I mean, these children are being released to their families, their family sponsors and in conjunction, other nonprofit resources around town are here to help with the process."

In Iowa, GOP Gov. Kim Reynolds took on a similar posture to Ricketts.

"This is not our problem," Reynolds recently told WHO Radio host Jeff Angelo. "This is the president's problem. He is the one that opened the borders. He needs to be responsible for this, and he needs to stop it."

Iowa House Minority Leader Todd Prichard, a Democrat, said this week that "it's unfortunate that we're not willing to help and to show that Iowa is a generous and welcoming state." Iowa's former Gov. Robert Ray, Pritchard pointed out, welcomed refugees from Southeast Asia in the 1970s. "The crisis at the border is a humanitarian crisis. Like so many things it wants to be played as a political football and [...] play the blame game, but I'm disappointed that we as Iowans aren't standing up to help."

South Carolina Gov. Henry McMaster took it even further, issuing an executive order on Monday that prevents undocumented children from being admitted into the state's foster care system, according to WSPA. The governor issued the following statement:

"South Carolina's children must always be given first priority for placement into foster care and the State's strained resources must be directed to addressing the needs of its children. Allowing the federal government to place an unlimited number of unaccompanied migrant children into our state's child welfare system for an unspecified length of time is an unacceptable proposition. We've been down this road with the federal government before and the state usually ends up 'on the hook."

McMaster's stance reportedly came after an analysis conducted by South Carolina's Department of Social Services Director Michael Leach, who echoed: "Allowing the federal government to place an unlimited number of unaccompanied migrant children into our state's child welfare system for an unspecified length of time is an unacceptable proposition. We've been down this road with the federal government before and the state usually ends up 'on the hook.'"

While the Republican governors of Texas and Arizona, Greg Abbott and Doug Ducey, respectively, wrote an op-ed in The Washington Post.