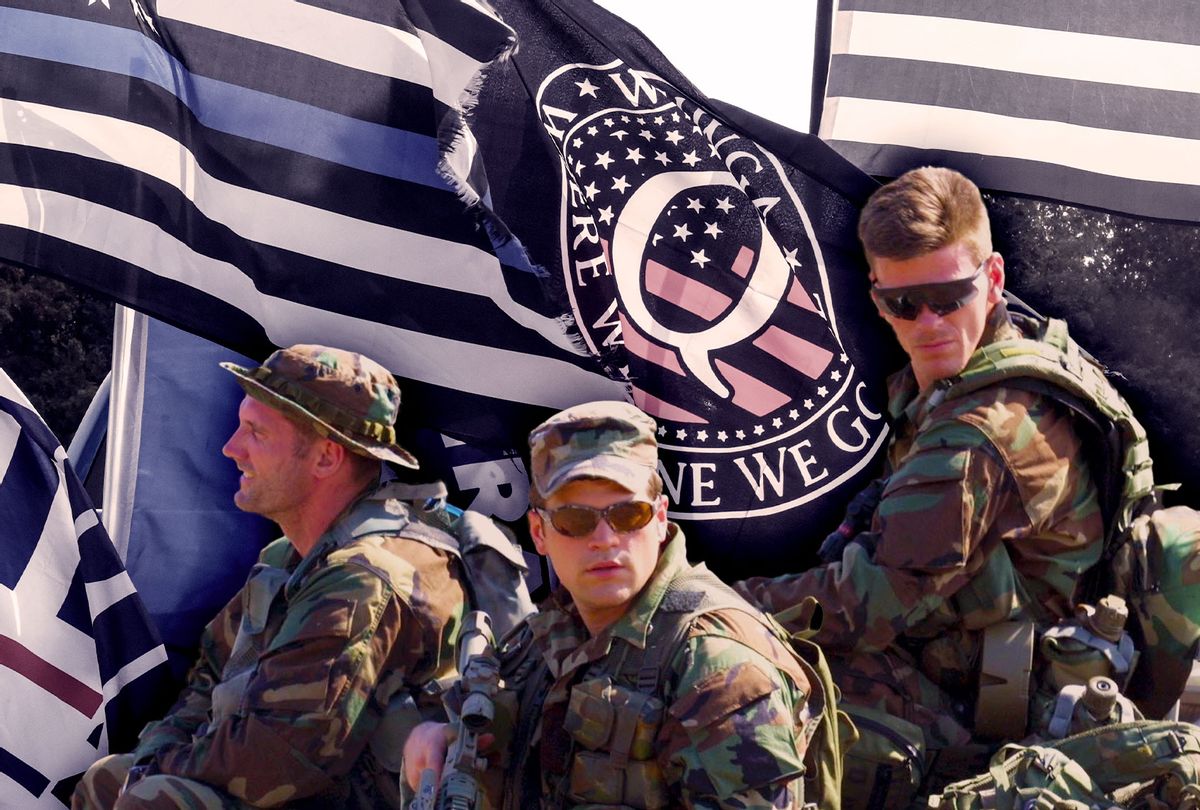 Members of the military's most elite units are spreading election fraud conspiracies, attacking government leaders with racism, and exchanging QAnon talking points in private Facebook groups, according to a bombshell NBC News report released on Friday.

The report, which reviewed hundreds of Facebook posts, primarily explored two different online groups which collectively have around 5,000 members: "SF Brotherhood - PAC" and "US Special Forces Team Room." Members of the two include former and current Rangers, Green Berets, and other special forces units.

In one instance, NBC found a post that alleged multiple aides to former Vice President Pence were involved in a "concerted effort by the thieves and pedophiles walking the hallowed halls of the [sic] peoples government" to sabotage former President Trump. Another post expressed outrage over the 2020 election following the Capitol riot, claiming that "Trump was sabotaged once again!" The poster added that "trying to get to the bottom of the obvious election fraud now looks like it doesn't have a chance."

Others took aim at Black Lives Matter, a movement expressly against state-sponsored violence.

"IF WE WANT TO MAKE AMERICA GREAT AGAIN WE WILL HAVE TO MAKE EVIL PEOPLE FEAR PUNISHMENT AGAIN," read one post with a picture of a noose included.

NBC noted that "the forums shouldn't be seen as reflective of the overall views of the whole special operations forces community." Two other Facebook groups reviewed by NBC mostly included more benign military-related news, with some discussion of politics.

But the findings nevertheless heighten concerns over right-wing extremism brewing within the ranks of the military. As NBC noted, several former members of special forces have been charged with crimes in connection to the Capitol insurrection. One, a former Green Beret, was caught on video violently assaulting a Capitol police officer with a flagpole. Authorities estimate that about 1 in 5 of those charged are active-duty or retired members of the military, according to MilitaryTimes.

"I am concerned about active duty," Robert Wilson, an ex-Green Beret who was commander of the 3rd Special Forces Group, told NBC. "I don't think special operations forces just develop these ideas in their head when they get out and are in their late 40s. So I think it starts in the military and probably gets worse when they're out."

Gary Reid, the director for defense intelligence at the defense department, echoed Wilson: "This is very disturbing material for me and very disturbing content that in no way would mirror the behavior expected of persons employed by the Department of Defense, and certainly not serving in the U.S. military."

Some of the posts uncovered by NBC specifically take aim at newly-appointed Defense Secretary Lloyd Austin, the first Black person to hold the position.

"He has risen to the very peak of his profession, riding on the color of his skin," one user wrote following Austin's announcement that the Defense Department would finally begin to address right-wing radicalization in the ranks. Several posters also used derogatory terms like "pus-gut maggot" and "bubba" to refer to the defense secretary, per the report.

"If you have been following Q for a while you know that Q taught many of us lurkers how he was going to communicate with us to [sic] by pass the mainstream media," one member wrote. "He's a mathematician by trade and had a brilliant aptitude to pick up Gematria code early in which the Cabal used to communicate with each other on [social media]."

Last month, Secretary Austin ordered a "DOD-wide stand down" to discuss the problem of right-wing extremism in the military with several ranking military officials. And last week, Austin issued a memo based on initial findings that called for a new definition of "extremism," as well as the establishment of the Countering Extremism Working Group to root out radicalism from the ranks.

"The story of radicalization in special operations is a story that needs to be told," Jack Murphy, a former Green Beret, NBC. "It has shocked and horrified me to see what's happened to these guys in the last five or six years."