Whatever Joe Biden says, the U.S. endless war in Afghanistan will keep going 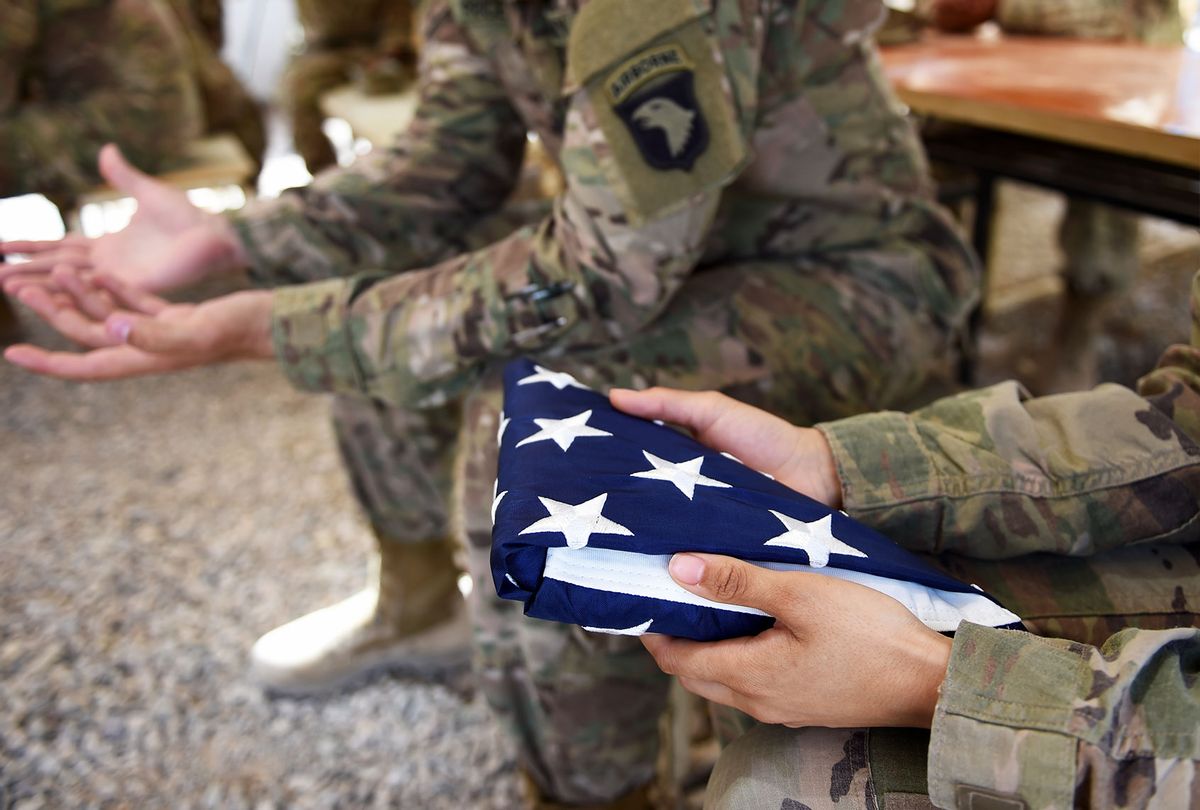 A US soldier holds the national flag ahead of a handover ceremony at Leatherneck Camp in Lashkar Gah in the Afghan province of Helmand on April 29, 2017. US Marines returned to Afghanistan's volatile Helmand April 29, where American troops faced heated fighting until NATO's combat mission ended in 2014, as embattled Afghan security forces struggle to beat back the resurgent Taliban. The deployment of some 300 Marines to the poppy-growing southern province came one day after the militants announced the launch of their "spring offensive", and as the Trump administration seeks to craft a new strategy in Afghanistan. (WAKIL KOHSAR/AFP via Getty Images)
--

When I met a seven-year-old girl named Guljumma at a refugee camp in Kabul a dozen years ago, she told me that bombs fell early one morning while she slept at home in southern Afghanistan's Helmand Valley. With a soft, matter-of-fact voice, Guljumma described what happened. Some people in her family died. She lost an arm.

Troops on the ground didn't kill Guljumma's relatives and leave her to live with only one arm. The U.S. air war did.

There's no good reason to assume the air war in Afghanistan will be over when, according to President Biden's announcement on Wednesday, all U.S. forces are finally withdrawn from that country.

What Biden didn't say was as significant as what he did say. He declared that "U.S. troops, as well as forces deployed by our NATO allies and operational partners, will be out of Afghanistan" before Sept. 11. And "we will not stay involved in Afghanistan militarily."

Biden did not say that the United States will stop bombing Afghanistan. What's more, he pledged that "we will keep providing assistance to the Afghan National Defense and Security Forces," a declaration that actually indicates a tacit intention to "stay involved in Afghanistan militarily."

While the big-type headlines and prominent themes of media coverage are filled with flat-out statements that the U.S. war in Afghanistan will end come September, the fine print of coverage says otherwise.

The banner headline across the top of the New York Times homepage during much of Wednesday proclaimed: "Withdrawal of U.S. Troops in Afghanistan Will End Longest American War." But buried in the 32nd paragraph of a story headed "Biden to Withdraw All Combat Troops From Afghanistan by Sept. 11," the Times reported: "Instead of declared troops in Afghanistan, the United States will most likely rely on a shadowy combination of clandestine Special Operations forces, Pentagon contractors and covert intelligence operatives to find and attack the most dangerous Qaeda or Islamic State threats, current and former American officials said."

Matthew Hoh, a Marine combat veteran who in 2009 became the highest-ranking U.S. official to resign from the State Department in protest of the Afghanistan war, told my colleagues at the Institute for Public Accuracy on Wednesday: "Regardless of whether the 3,500 acknowledged U.S. troops leave Afghanistan, the U.S. military will still be present in the form of thousands of special operations and CIA personnel in and around Afghanistan, through dozens of squadrons of manned attack aircraft and drones stationed on land bases and on aircraft carriers in the region, and by hundreds of cruise missiles on ships and submarines."

We hardly ever hear about it, but the U.S. air war on Afghanistan has been a major part of Pentagon operations there. For more than a year, the U.S. government hasn't even gone through the motions of disclosing how much of that bombing has occurred.

"We don't know, because our government doesn't want us to," researchers Medea Benjamin and Nicolas Davies wrote last month. "From January 2004 until February 2020, the U.S. military kept track of how many bombs and missiles it dropped on Afghanistan, Iraq and Syria, and published those figures in regular, monthly Airpower Summaries, which were readily available to journalists and the public. But in March 2020, the Trump administration abruptly stopped publishing U.S. Airpower Summaries, and the Biden administration has so far not published any either."

The U.S. war in Afghanistan won't end just because Biden and the mainstream news media tell us so. As Guljumma and countless other Afghan people have experienced, troops on the ground aren't the only measure of horrific warfare.

No matter what the White House and the headlines say, U.S. taxpayers won't stop subsidizing the killing in Afghanistan until there is an end to the bombing and "special operations" that remain shrouded in secrecy.