America is not on trial. Derek Chauvin is 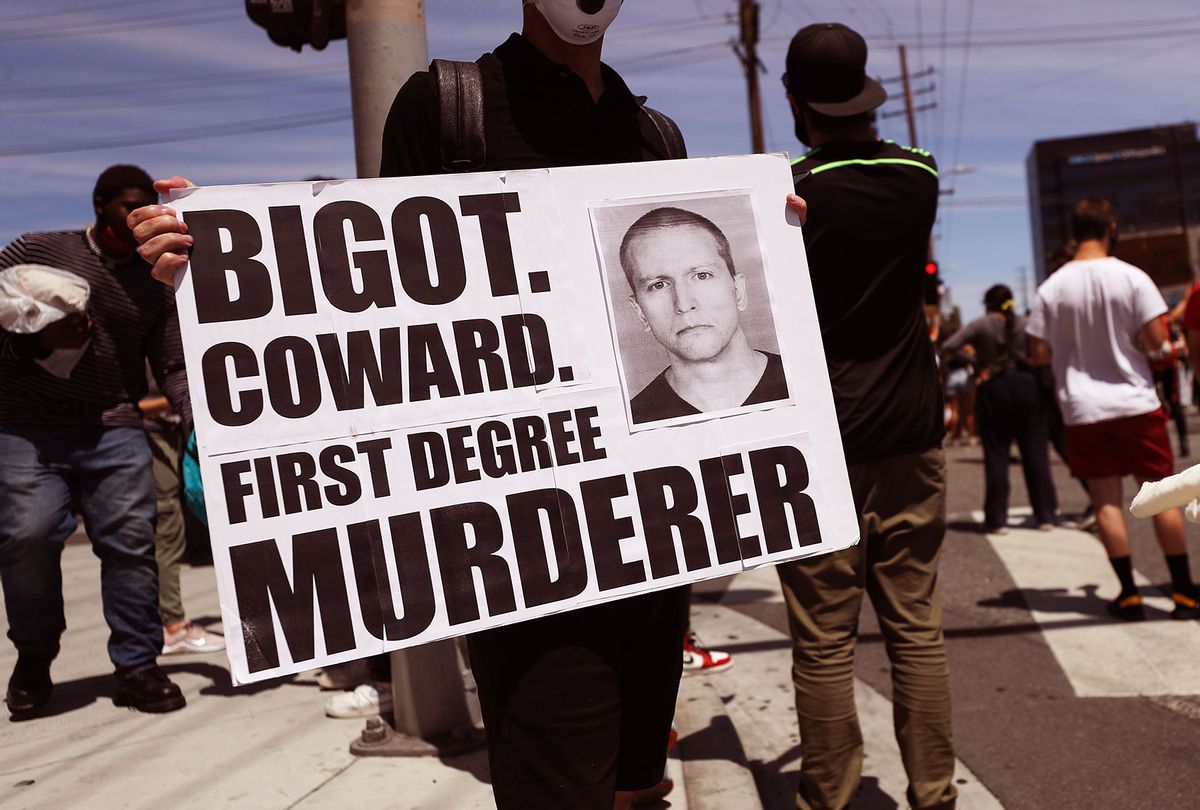 A protester holds a sign with a photo of former Minneapolis police officer Derek Chauvin during demonstrations following the death of George Floyd on May 30, 2020 in Los Angeles, California. Chauvin was taken into custody for Floyd's death. Chauvin has been accused of kneeling on Floyd's neck as he pleaded with him about not being able to breathe. Floyd was pronounced dead a short while later. Chauvin and 3 other officers, who were involved in the arrest, were fired from the police department after a video of the arrest was circulated. (Mario Tama/Getty Images)
--

George Floyd's accused killer, Derek Chauvin, is on trial and I can't turn away.

Since the video showing the kneeling on the neck of a 46-year-old unarmed Black father, who then died, by a police officer with a history of fatal force went viral, so did their names, sparking one of the biggest social justice movements in global history. So yes, Derek Chauvin's trial, which is set to conclude early next week, will be televised.

TV both creates and feeds our obsession with viral murder trials. We can't fault the networks for it, because so many of us refuse to turn away, just as we will stop and watch wild fights that break out in supermarkets, slow down on the beltway to gaze at flipped-over cars, and stand outside of burning buildings that have nothing to do with us. We are hooked on other people's trauma. We are thirsty for it and can't wait to drink as much as possible.

The trial has been playing on every device and TV in my house since it began in late March. As I watch, I wonder how many people I grew up with are cheering for the prosecutor, the one profession (next to cops and meter readers) we normally despise. I grow angry when the defense speaks, when Chauvin's name is mentioned, when Chauvin looks up, when he scribbles into his yellow legal pad. And then that video, over and over again, references to it, clips and screenshots, makes me even more angry. And yet I binge this trauma.

I told myself to look away, because nothing good can come from watching this. I've watched trials on TV before: George Zimmerman, the wannabe cop and armed neighborhood watchman who followed and killed Trayvon Martin, an innocent unarmed 17-year-old child, after real members of law enforcement told him to leave the teenager alone. And of course, despite overwhelming evidence, Zimmerman went free. These trials incite a visceral rage in me. Obviously guilty people get to sit on TV and play innocent while demonizing those they killed — the Mike Browns, the Trayvons, the Freddie Grays, the real victims who never got their day in court because their lives were snatched away. It is heart-shattering. Why should I watch a trial knowing that these people — often cops — too often will go free? It's like begging for punishment. But I guess I crave the pain, because I can't turn away.

I know everybody in America is entitled to a fair trial. But trials for Black people never seem fair. Chauvin is accused of killing an unarmed man on camera in one of the most harsh ways I have ever seen. So civilians like me, many of whom have sat in courtrooms before, will never truly understand why this trial experience seems a bit elaborate. Does Chauvin deserve to be heard? I think we all heard him loud and clear when he slid his hands into his pockets after resting his knee along with all of his body weight on George Floyd's neck as Floyd called out for his late mom, face pressed against the warm concrete. What else can be said?

I try to look away, but that means I also can't watch the news because the trial or commentary about it is on every channel. I check in on my wife who is working from home in the next room, and she's streaming the trial during every break that she gets. All of my friends are posting about the trial on social media and every group chat on my phone. Even when I try I can't escape it. It's a weak excuse, I know, but still, it's just enough to make me give in and watch.

One thing I do appreciate about the Derek Chauvin trial is that people are actually calling it "The Derek Chauvin Trial." This is not "The George Floyd Trial." Floyd did not get a trial because he died before he could have his day in court. Remembering that, repeating that, and reminding people of that is extremely important. Years back, when Michael Brown and Freddie Gray were killed, I remember being frustrated not just at the sight of their killers, but with how the public referenced the trial as if the victims were the subjects facing charges, not the killers. All heard was, "What's up with the Freddie Gray case? Any updates on the Freddie Gray case?" The names of his killers: Caesar R. Goodson Jr., Garrett E. Miller,  Edward M. Nero, William G. Porter, Brian W. Rice and Alicia D. White should have been incorporated into the narrative and actively used because they were the suspects on trial. Defense attorneys in all of those cases wanted to frame the trials around the victims instead, digging through through their pasts in the most racist ways possible, wanting to justify their deaths. They are trying this with Floyd as well.

What I don't appreciate is how some cable news outlets and pundits are pushing this idea that "America is on trial" right now. America is not on trial. Derek Chauvin is on trial. Chauvin's indictment has not changed the standard procedures of police in America. We see this with the new body camera footage released that shows how Officers Joe Gutierrez and Daniel Crocker treated Lt. Caron Nazario in Virginia, pulling him over and pepper spraying him even though he was in uniform and following their orders. (That really doesn't matter in America.) About 10 miles away from where Chauvin is being tried, 26-year police veteran Kim Potter shot and killed Daunte Wright, a 20-year-old unarmed Black man, and the department claims she mistook her gun for her taser, which is the dumbest excuse I have ever heard. It's like these people don't even care to try harder in their own defense. It's like they know they don't have to.

Add those brutalities to the scores of cases that don't go viral, and that's our system. If Derek Chauvin is convicted, it will not erase hundreds of years of enslavement, oppression and racism dumped on Black people of the past, present, and babies who aren't even born yet. Unborn Black children in America will be guaranteed to feel the effects of racism. It is a traditional part of the Black American experience. Would I be happy if Chauvin is convicted? Absolutely. Will I feel like equality will finally be granted to Black people in America as a result? Absolutely not.

A Chauvin conviction would be a good thing for Floyd's family because that is what justice means to them. But it will probably not apply pressure to the many reckless officers policing poor communities of color without care. If convicted, Chauvin will not be the first cop to serve time. Cops know they can go to jail for killing unarmed Black people. Sometimes it does happen. And yet they still do it.

So what could a Chauvin conviction mean to our country as a whole?

I image it could have an Obama effect: The kind of result that will allow people of privilege to assume, falsely, that a particular manifestation of racism has been vanquished. This has happened to me at so many functions, and events I've keynoted, over the past five years. I'll give a talk about racism in America and what it is like and how we survive and sometimes thrive. Then some white dude with glasses and flannel will make his way to the microphone for questions, and he'll scratch his head, thank me for coming out to the event, and say something that boils down to, "We elected a Black president, so racism is over, right?" As if I didn't just spend the previous hour going into detail about how racism remains America's number one cash crop. As if I haven't traveled the world, taught and spoke and vacationed in all kinds of places, and encountered people who don't speak a word of English, but strangely, somehow, everyone knows what the N-word means.

America is not on trial. Derek Chauvin is on trial. We need the larger conversation to be about meaningful police reform, accountability, community investment and police defunding — topics that many people in power run from. It's easy for me to say "defund the police," I suppose. I don't call the cops, even when something bad happens. I don't expect them to care about me, and they have proven it time and time again. My taxes do pay their salaries, but they don't work for me.

But since we can't collectively acknowledge that policing in America is a failed system that doesn't deserve its power over us, then I will leave with one question: If we are in the age of cancel culture, living in the so-called wokest climate of American history, why does it take so much to convict an agent of an institution that executes and arrests a disproportionate number of Black and brown people every year?

Answering it honestly would be a first step in putting America on trial. I don't expect to see that happen any time soon. Meanwhile, I will continue watching to see if Derek Chauvin is convicted. This is what we get for now.