Looking for the meaning of Lil Nas X’s latest video? The detail is in the devil 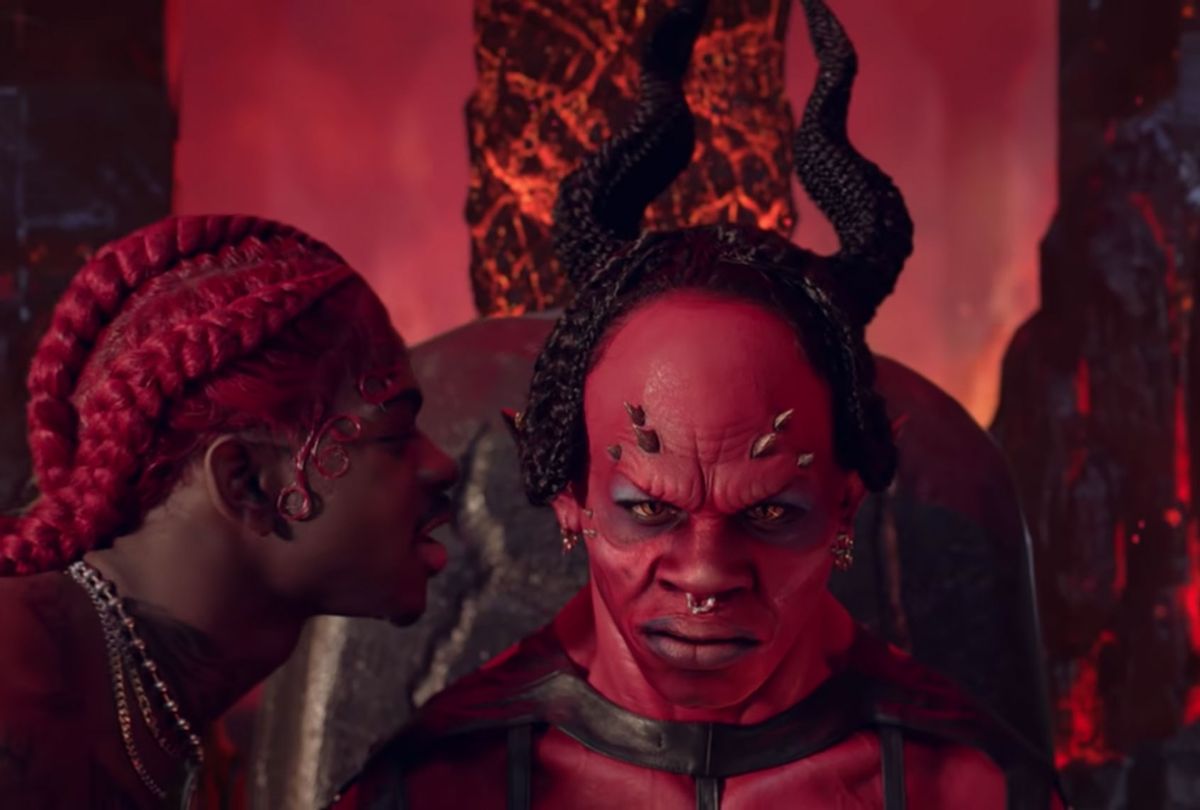 Musician Lil Nas X's video for his new single "Montero (Call Me By Your Name)" is a defiant expression of queer sexuality. Filled with Christian imagery, it offers a complex criticism of religious institutions that some have applauded. For others, however, the video is sacrilegious.

As a heterosexual white man, I must acknowledge significant limitations to what I can understand and say about this work.

But as a scholar who researches Christian thought beliefs regarding the demonic, I am struck by the significance of Lil Nas X's work as an example of the ways that marginalized peoples have resisted demonization.

Despite the temptation to interpret the video as a flashpoint in culture wars between religious conservatives and the LGBTQ community, "Montero" is, I believe, best understood by comparing it with other creative works by demonized peoples that critique, mock and reject societal misconceptions about what is truly evil.

Coming out and breaking through

Montero Lamar Hill, known artistically as Lil Nas X, is no stranger to disrupting restrictive categories. His breakthrough hit "Old Town Road," received as a crossover between country and rap, unleashed the specter of racism within the institutions of country music.

Lil Nas X publicly came out as queer in 2019. The story he tells of his early life as a gay teen is, sadly, all too familiar. As a young Christian boy, he was conflicted over his sexuality and wondered if it meant he was beyond redemption and damned to hell.

Lil Nas X's experience mirrors that of many LGBTQ people who grew up in conservative religious households. It also speaks to Western Christianity's long tradition of demonizing queer, Black, Jewish, Indigenous and other people. In Christian art, literature, and spirituality, beliefs in evil spiritual beings have informed, and been informed by, xenophobia and antipathy toward particular groups.

Blackness and what is considered to be "deviant" sexuality are frequently demonized in Christian history. Demons regularly and intentionally appear in the form of Black bodies throughout Christian traditions, and Black persons are also regularly associated with sinful sexuality, influenced by Greco-Roman beliefs that people with dark skin were "hypersexual."

These associations continue to inform Christian belief and practice today. Some contemporary Christian communities, for example, perceive homosexuality to be demon possession and seek remediation through violent and psychologically terrifying exorcisms.

Dancing with the devil

The song "Montero" comes across, at first, as a straightforward expression of sexual and romantic desire. However, it also includes biblical references in the lyrics – such as the line "If Eve ain't in your garden" – alongside more explicit references to gay sex.

The video evokes an impressive number of religious and classical motifs that intersect with questions of queer identity, marginalization and religion. Throughout the video, Lil Nas X explores what it means to celebrate his identity and desires.

The video takes place in three acts, bookended by a seduction of Lil Nas X in the Garden of Eden and a dance with the devil in the underworld. In the middle section, Lil Nas X is executed – ostensibly as a queer martyr – after which he pole dances to hell. The irony is not lost on viewers. As comments on Twitter and YouTube point out, Lil Nas X defiantly goes exactly where he was always told he would end up. Once in hell, Lil Nas X gives the devil an energetic lap dance. He then swiftly kills Satan and dons his horns.

However, these interpretations, I believe, misread the video. It instead should be understood in the context of marginalized peoples parodying demonizing rhetoric. It also isn't without precedent. Just as the history of Christianity is punctuated with the demonizing of numerous groups, so too is there a tradition of victims creatively rejecting and mocking such demonization.

In Panama, for example, some people engage in annual rituals that turn the tables on the Spanish colonists' use of "evil" to suppress rebellion. According to ethnographer Renée Alexander Craft, European colonists scared enslaved persons into submission by claiming that the devil would harm them if they rebelled.

To this day, many citizens of Panama, who trace their cultural heritage to these enslaved people, critique this language as they memorialize the famous slave rebellion that earned their freedom.

Around the time of Easter, they dramatize the rebellion while wearing costumes as angels and demons. The former represents the slaves and the latter their European masters. This performance mocks the demonizing language and actions of the colonists. Observers and participants in the ritual are provoked by the ritual to reflect upon the true nature of evil.

Grasping by the horns

For some, this might have reflected an irreverent rejection of Christianity itself, in light of its promotion of slavery and failure to promote liberation. But for others, these motifs offer more complex parody and critiques of (white) Christian categories.

According to Adam Gussow, a scholar of Southern studies, a song like Clara Smith's "Done Sold My Soul to the Devil" satirizes the way that a white racist society perceives Black people as demonic, and playfully embraces that identity as an act of defiance. Other songs more explicitly reverse the language by instead identifying white supremacist society with the devil. The blues disrupt categories of good and evil and reveal the victims of demonizing rhetoric.

Lil Nas X's video stands in this long tradition of demonized peoples mocking those who call them demonic. When he apparently becomes the devil in the final shot, looking straight at the camera, he provokes the viewer to confront and question their assumptions about the nature of evil. His portrayal in the video embodies the epitome of evil, ironically, in order to reject that label.