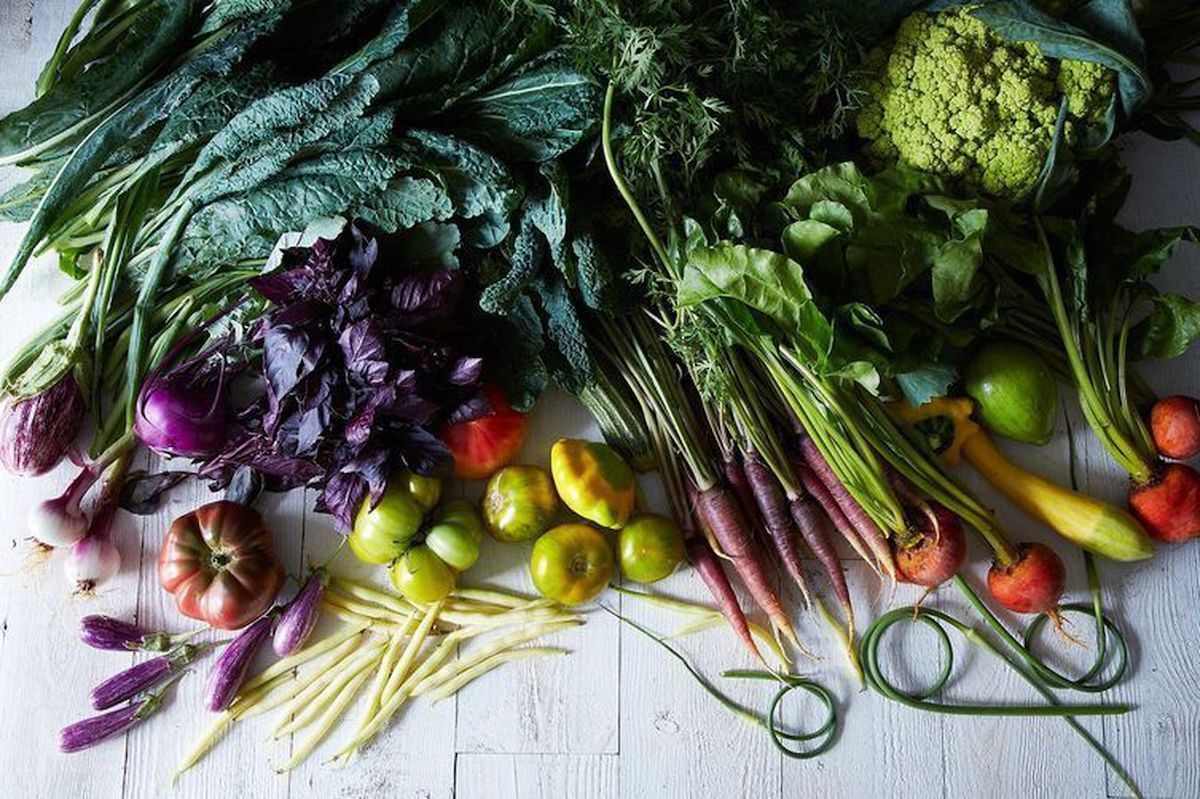 I recently received a bunch of kale as a gift. "A bouquet of greens, for your smoothies," my best friend said, a mischievous smile on her face. As I pulled some of the leaves off their stalks to freeze (because nobody likes kale that's gone yellow from fridge-burn), a memory pulled me back: I was sharing a kitchen with Delle, a chef with whom I had connected while living in the forest a few months prior.

A week after my father was buried in January of last year, I went on a monthlong retreat in the milkwood forest of the South African Fynbos. I'd previously scheduled the trip, but as I prepared to leave, I was grateful for the timing of it all — it offered the space and respite that I needed during a difficult time for my mental health. I was already severely burned-out (after years of training and working as a psychotherapist), and now I was navigating the particularly complicated process of grief.

For a month, I knelt for an hour — every morning and every evening — with no other intention than to simply follow my breath. I crouched daily on my meditation cushion, noticing every sensation, thought, and sound, granting myself permission to let go of any urge to react.

I spent mornings tending to a small vegetable garden, taking walks into the forest, and learning about the practical ins and outs of sustainable living, like the art of mindfulness during mundane tasks, and grouping all my junk for recycling. I had also just committed to a vegetarian diet and was eager to learn how to cook nourishing meals for myself. On this particular morning in my memory, while learning how to make vegan butter and bake gluten-free cakes, a fresh produce delivery arrived. While sorting through, Chef Delle loosely planted a paper towel in her hair, picked up a bunch of spinach, and slowly pranced the length of the kitchen with a beaming smile on her face. "When I get married," she declared, "my bouquet shall be made of greens instead of flowers." Between my giggles, I casually quipped that flowers are bound to die from the moment they are picked anyway.

Organic fresh produce is always more than just food. As living organisms, by their very nature, they continue to give life even when they're ingested and reach the gut. As I spoke with Delle, I considered my grandmother perhaps held this belief, too, as she spoke to her vegetables whenever she shuffled through and tended to her garden—watching her do this is still one of my favorite childhood memories.

That time spent in the Fynbos, learning how to care for and prepare my food, proved to be about so much more than learning to cook meals without meat. I slowly became more mindful of the indigenous foods from my childhood — I had not truly considered their ability to play a pivotal role in aiding my mental health and burnout recovery as an adult. I remembered the wisdom of my grandmother and great-grandmother, who often spoke about indigenous foods as gifts granted by the Earth. A gift that not only nourishes our bodies, but reconnects us to our spirits, too. Because that is where wellness begins, and it is how wellness is sustained.

Nutritional psychiatry is an emerging field that specifically looks into the various ways food affects mood. By drawing on comparative studies of traditional diets such as the Mediterranean diet, and modern Western diets, scientists found that modern Western diets lean toward highly processed foods and sugars, while various traditional diets consist largely of fresh produce, unprocessed grains, and fermented foods that serve as probiotics for gut health.

In my prior role as a psychotherapist, I had often sat across from a clinically depressed patient and outlined the importance of a nourishing diet as part of their treatment plans. We would draw up charts and schedules for medication, movement, and meal prep. Apart from psychotherapy sessions and consultations with their psychiatrists, these were some of the pillars that would support their journeys toward wellness. Still, when it was my own grief that I needed to process, I couldn't take my own advice when it was my mental health that was crumbling. In my desperation to simply get well, I had disregarded the reality that I, too, would have to lean on those same pillars, and take the same journey I'd so often outlined for my former patients.

The first time Delle insisted I bake a gluten-free cake without her input while I was on the retreat, I stood before an array of flours in the pantry and noted the sorghum flour for the first time. I immediately remembered how my grandmother—and later, my mother — fermented sorghum in tiny buckets that they would leave in dark little nooks around their kitchens, which they later cooked into a breakfast porridge. But it had never occurred to me that it was a grain I could use to prepare a dessert. And so right there, while learning to nourish myself in new ways, I began to research and quiz the chefs around me whenever I noted other familiar ingredients. I would call my mother to ask for their names in Sepedi, often confirming that they tasted familiar because we had been consuming them in other ways.

I was starting to feel better; my energy levels were higher, and my sleep was increasingly restful. Regularly harvesting, cooking, and baking with these rediscovered indigenous foods was nourishing more than just my body. I began to light a candle every time I was preparing a meal or dessert alone in the kitchen. I began giving thanks for the Earth's provision, for the wisdom of the women in my lineage, and for the women who had become my teachers. Because the candle of my spirit was beginning to bear its own flame. My mood was lifting, my sense of creativity was returning, and I was finding my way as I leaned deeper into other mental-health-aiding practices. From having a luxuriously slow morning routine of brewing herbal tea, journaling, moving my body, and meditating, to spending ample time in nature, and, as much as I can, structuring my life around the rhythms of my menstrual cycle — and always remaining open to consulting a psychotherapist or psychiatrist should the need arise.

Mental health and well-being isn't limited to food alone. However, rediscovering the indigenous foods that have traveled down generations in my family, and placing intention on my habits and health, was a crucial part of my recovery — and effectively a homecoming to myself.

Here are just some of the traditional foods that I now incorporate into my diet as often as possible — for their health benefits and reminders to remain mindful, but also for the childhood nostalgia:

Sorghum is a particularly versatile gluten-free grain that is native to the southern regions of Africa. Its crops are quite hardy, so it is able to thrive even during droughts and extreme heat. With a nutrient profile that includes high levels of antioxidants, fiber, vitamin B, magnesium, and protein, sorghum is great for energy production and heart, gut, skin, and hair health, among others. Popularly consumed as a fermented breakfast porridge, sorghum can be ground into a flour to make baked goods, boiled or steamed as you would rice or quinoa, popped similarly to popcorn as a snack, or prepared into a sweetener by pressing its stalks for a kind of molasses or its plant juice for a syrup.

Growing up, my mother's pantry was never without a small, tightly-bound bag of dried greens. Often received from other relatives — depending on what was growing in their own gardens — these bags contained dried pumpkin leaves, sweet potato leaves, kale, and others, all of which have their own host of nutritional properties, and can be boiled, steamed, or creamed as one would other variants of spinach, or they can be added to stews and soups. Mostly, my mother keeps dried amaranth leaves. Amaranth plants grow much like weeds in the tropical regions of Africa, and like sorghum, amaranth grains are gluten-free and versatile. They are also high in iron, which aids cellular metabolism, potassium for heart rate and blood pressure, as well as vitamins A, B, C, and K. Amaranth can be consumed as a grain, flour, oil, or even as an herbal flower tea.

The southern African fruit marula is high in amino acids, antioxidants, and fatty acids, which aid in cell repair, breaking down food and preventing skin damage. The marula fruit holds significant socioeconomic benefits for South African women who ferment it to prepare beer (many an uncle's kryptonite at major family gatherings); the tree's leaves, bark, and roots can also be used in food and to create beauty products, all of which offer other sources of income. Furthermore, the marula tree can be sourced for medicinal purposes, as well as ritual cleansing practices in South African Zulu, Venda, and Tsonga cultures.

One could wonder: Was there really even a wedding if the aunties did not argue about whose homemade ginger beer recipe is better? This popular South African beverage is intense: Fiery in flavor, ginger beer is not to be conflated with saccharine ginger ale — it's a nonalcoholic, fermented beverage that is made with fresh ginger and pineapples, while ginger ale is a carbonated beverage that is flavored with ginger. Gingerol, the principal bioactive compound in ginger, boasts anti-inflammatory properties and may lower blood sugar levels and heart disease risk. Ginger beer tastes like summer, and its smell immediately takes me back to being huddled on the floor with my favorite cousins, sharing secrets (which is sometimes the best medicine after a really hard day).

This post contains products independently chosen (and loved) by Food52 editors and writers. Food52 earns an affiliate commission on qualifying purchases of the products we link to.