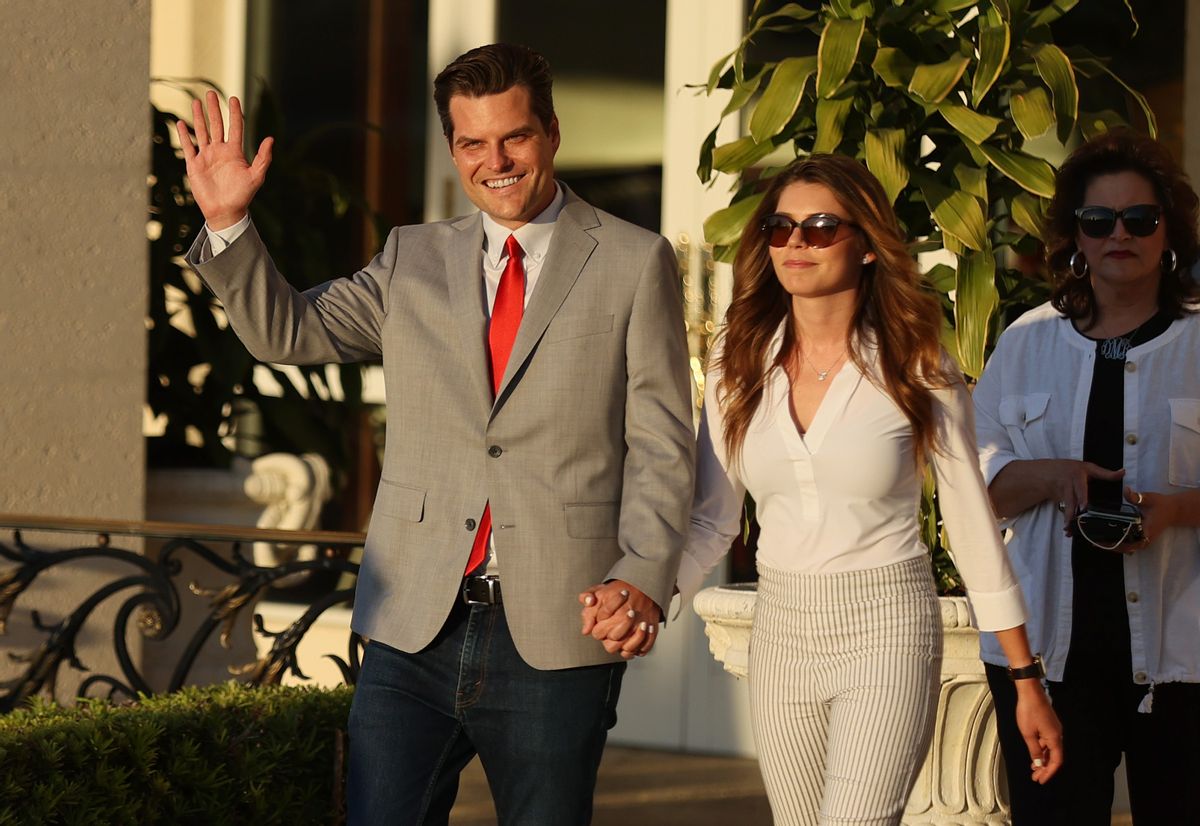 Rep. Matt Gaetz, R-Fla., and his girlfriend, Ginger Luckey, arrive before he speaks during the "Save America Summit" at the Trump National Doral golf resort on April 9, 2021, in Doral, Florida. (Joe Raedle/Getty Images)
--

In a deep dive into the influence the father of Rep. Matt Gaetz, R-Fla., has had on his son's political rise, a Florida political operative claimed that "Papa Gaetz" was using his considerable political influence to tamp down criticism of his embattled son.

According to Politico's Gary Fineout, it is no secret in Florida political circles that state Sen. Don Gaetz — known as "Papa Gaetz" — has used his years lording over and wheeling and dealing in Panhandle politics, as well as his substantial wealth, to guide his son — referred to as "Baby Gaetz" — into the public eye and Congress.

"Matt Gaetz's political trail was not just preceded but heavily influenced by his father, a Republican multi-millionaire businessman who had a reputation for rhetorical flourishes and drag-out political fights. Don Gaetz all but paved his son's way into Florida's political world, and some suggest that his father's stature and influence is even helping his son as he faces a probe into potential sex trafficking," Fineout wrote.

According to a former lawmaker colleague of the elder Gaetz, the father of the Republican House member has always been a force in the community.

"He was a force of nature," explained former state Senate President Joe Negron, with Fineout reporting, "And Don Gaetz found himself in plenty of battles — and still is today. Last year, he went after a former legislator who once fired his son and who was seeking local office. Don Gaetz clashed enough times with former Gov. Rick Scott — now a senator — that the GOP governor lined up opposition to Don Gaetz's bid to become president of the University of West Florida."

According to one Florida political insider, while Don Gaetz has kept mostly in the background — for the time being — as his son is investigated over sex trafficking accusations, he is working behind the scenes to assist his son.

"Don has a lot of power and friends in Florida politics," the political operative said, speaking on condition of anonymity. "There are a lot of people who owe him favors. They are repaying those favors by staying silent about his son."