“I could’ve been a George Floyd yesterday": Protester's beating by Louisville police caught on tape 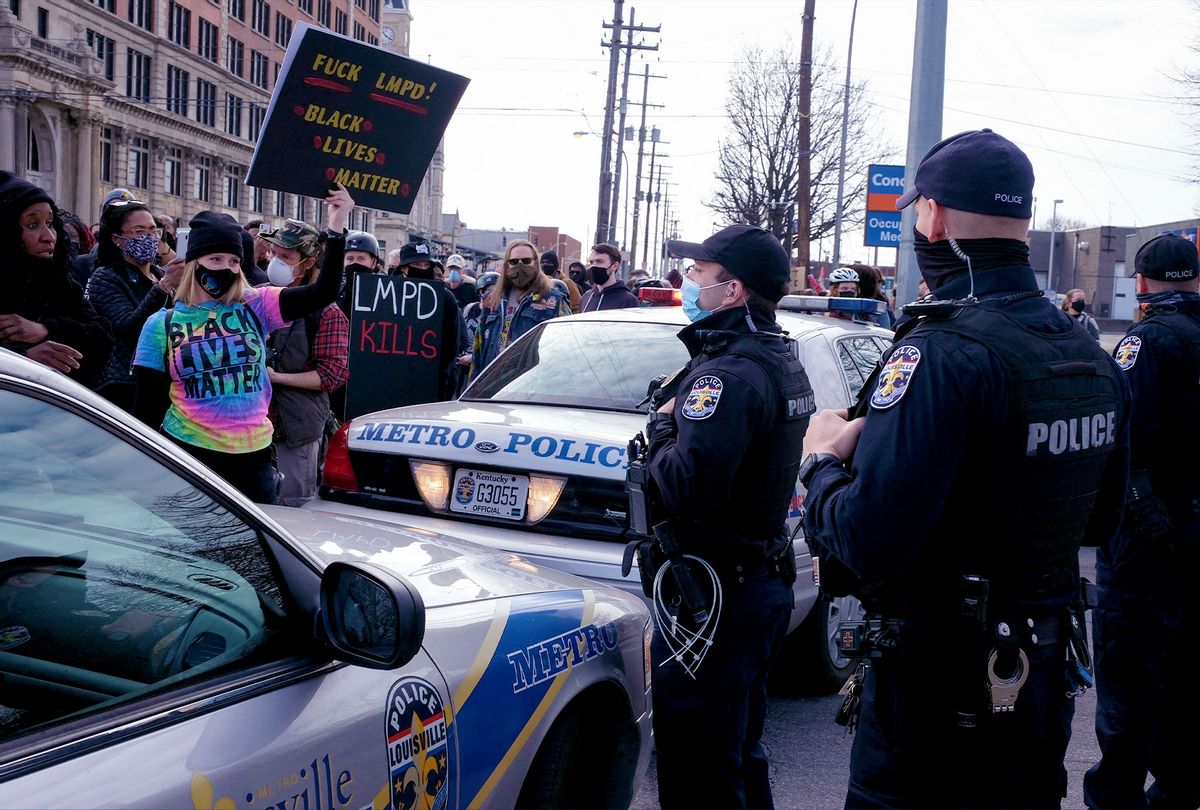 A protestor holds an anti-LMPD sign in front of Louisville Metro Police Department officers during a rally in remembrance of the one year anniversary of the death of Breonna Taylor in Louisville, Kentucky on March 13, 2021. - Twelve months after the killing -- in which police shot Taylor while looking for a former friend of hers -- only one of three police officers has been charged, and only for endangering Taylor's neighbors by firing wildly. (JEFF DEAN/AFP via Getty Images)
--

A Louisville, Kentucky police officer was seen punching a protester in the head during the protester's arrest. The incident is just the latest in a string of videotaped acts of police brutality.

The man captured on video, 29-year-old Denorver Garrett, was protesting on Sunday near Jefferson Square Park, the site of many demonstrations around the death of Breonna Taylor, a 26-year-old Black woman who was fatally shot by police in her home in 2020.

Jamie Hendricks, who filmed the video of Garrett's beating, told the Courier-Journal that Garrett was initially protesting in a crosswalk, holding a signature cross that made him a well-known protester from past demonstrations. According to WLKY, court records indicated that police claim Garrett was posing safety concerns to motorists on the roadway, which prompted several officers to intervene. Garrett's police citation details that he "was causing a disturbance" for about 30 minutes prior to their intervention.

The citation also alleged that when officers intervened, Garrett "was told he was under arrest and to place his hands behind his back." It continues, "He resisted the officer's movements to put his hands together close enough to put handcuffs to the ground where he continued to disobey officers instructions to place his hands behind his back." Hendricks, who witnessed the incident, told the Courier-Journal that she did not see any signs of resistance from Garrett. As the officers apprehend him, Garrett can be heard saying, "I'm not doing nothing."

One officer repeatedly tells Garrett to "stop flexing," and then forces Garrett to the ground with the help of several others before punching him in the head at least three times as onlookers plead for the officers to stop. Garrett's glasses were reportedly broken during the violent struggle, according to CBS.

"It's unreal to me that that just happened right in front of me," Henricks told the Courier-Journal. "He was just making his voice heard, and he has a right to do that. It shouldn't take 10 cops to come over and take care of that."

"Regardless of what he did or didn't do, we have this thing called the presumption of innocence in our constitution," said Garrett's attorney, David Mour. "When they're taking him into custody, he's innocent, and this is the way we treat an innocent Black man."

Garrett, who was charged with a "misdemeanor disorderly conduct and resisting arrest," has been released on his own recognizance.

Louisville Metro Police Chief Erika Shields acknowledged that the video "raises serious questions and is not consistent with LMPD training." The department has not, however, released the names of any of the officers, nor have any of them been publicly put on leave.

Shields said that the department is opening a probe into the incident with the Professional Standards Unit, which conducts internal investigations over police misconduct. In the past, internal reviews of complaints made against police have not been shown to effectively hold police accountable.

Last week, Breonna Taylor's mother, Tamika Palmer, filed an internal affairs complaint against the six Louisville Metro police officers implicated in Taylor's shooting. "We believe a thorough investigation of these allegations will expose the rotten underbelly of a rogue police division and the lengths that investigators went to protect the officers," Palmer's attorney, Sam Aguiar, said in her complaint. "And when it does, LMPD needs to show that it will clean house, get Tamika Palmer the answers she's been owed for a year and honor the oaths sworn to protect our citizens. These officers can't be allowed to lie and say it's alright because they're police."