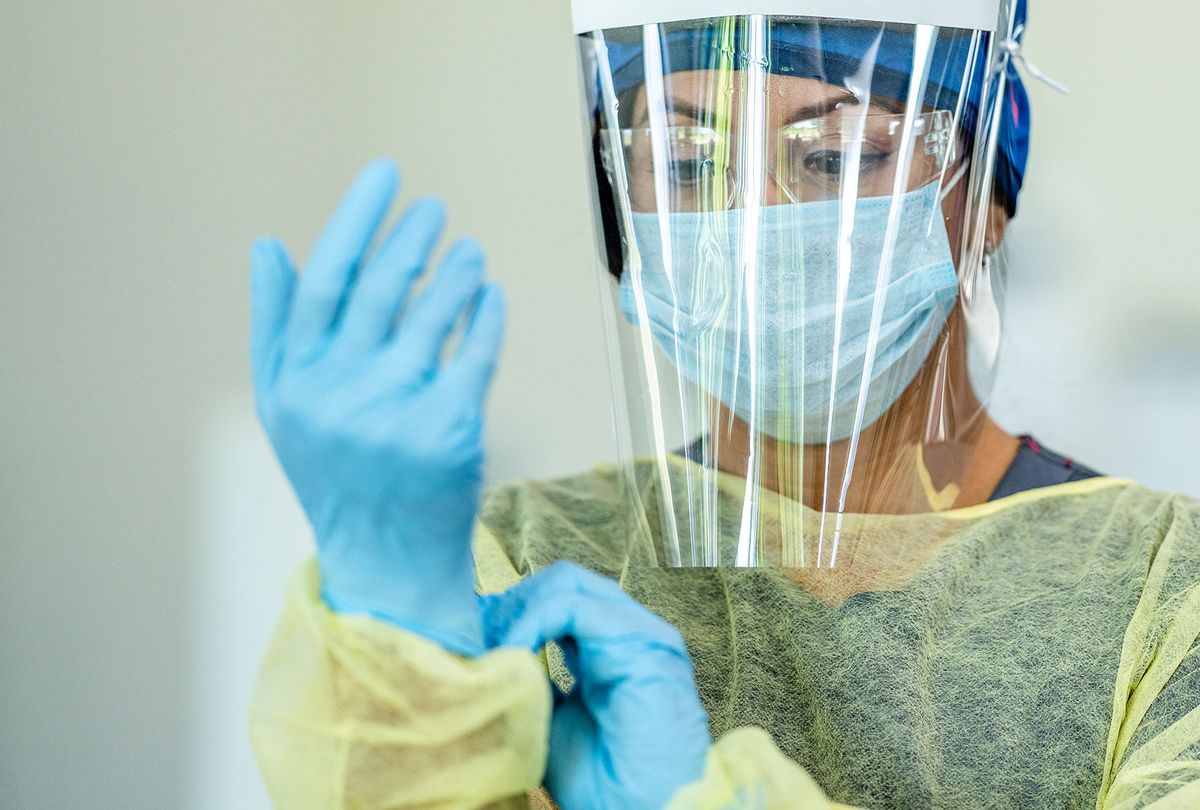 In a year when COVID-19 shattered the pleas of so many who prayed for miracles, a Georgia man with two new lungs is among the fortunate.

Mark Buchanan, of Roopville, received a double-lung transplant in October, nearly three months after covid left him hospitalized and sedated, first on a ventilator and then on the last-resort treatment known as ECMO.

"They said that it had ruined my lungs," said Buchanan, 53, who was a burly power company lineman when he fell ill. "The vent and the covid ruined 'em completely."

At the time, only a handful of U.S. hospitals were willing to take a chance on organ transplants to treat the sickest covid patients. Too little was known about the risks of the virus and lasting damage it might cause, let alone whether such patients could survive the surgery. Buchanan was turned down at Emory University Hospital in Atlanta, according to his wife, Melissa, who said doctors advised her to withdraw treatment and allow him to die peacefully.

"They were telling me to end his life. I told them absolutely not," recalled Melissa Buchanan, 49. "We all started Googling any place that would take someone who needed a lung transplant."

It took calls to several hospitals, plus a favor from a hometown physician, before Buchanan was accepted at the University of Florida Health Shands Hospital, 350 miles away in Gainesville, Florida. He received his new lungs Oct. 28.

Nearly six months later, the transplant landscape has radically changed. Covid-related transplants are surging as hospitals grapple with a growing subset of patients whose organs — most often hearts and lungs — are "basically destroyed by the virus," said Dr. Jonathan Orens, a lung transplant expert at Johns Hopkins University School of Medicine in Baltimore.

"You're seeing it move around the country, and it's moving around pretty quick," said Dr. David Weill, former director of the Stanford University Medical Center's lung and heart-lung transplant program who now works as a consultant. "It's like wildfire, where centers are saying, 'We did our first one, too.'"

The upsurge in transplants has been fueled largely by the broad reach of the virus. As U.S. covid cases top 31 million, with more than 560,000 deaths, thousands of patients who survived particularly serious infections are left with badly damaged organs that pose life-threatening complications.

"I think this is just the beginning," said Dr. Tae Song, surgical director of the lung transplant program at the University of Chicago Medical Center. "I expect this to be a completely new category of transplant patients."

Tens of thousands of patients whose organs were otherwise healthy have developed severe, chronic lung disease after contracting covid. Because it's a novel disease, exactly how many will go on to need lung transplants isn't yet clear, said Weill, who has called for the development of a lung transplant registry to track outcomes.

So far, the rise in covid-related transplants has not dramatically affected the existing waiting lists for organs. Of the more than 107,000 patients on waiting lists, about 3,500 need hearts and more than 1,000 need lungs. Most of the rest are waiting for kidney transplants, which have not been subject to a significant increase because of covid.

Organs for transplant are allocated according to complicated metrics, including how long the patients have been waiting, how ill they are, how likely they are to survive with a transplant and how close they are to donor hospitals. The goal is to treat the most medically urgent cases first. The rules don't necessarily bump covid patients to the front of the line, experts said, but many become sick enough to require immediate care.

That was the case for Al Brown, a 31-year-old car salesman in the Chicago suburb of Riverdale, Illinois, who caught covid in May and was diagnosed with congestive heart failure several weeks later. In September, he woke up with severe chest pains that sent him to the emergency room.

"Shortly after, they told me my heart was working at only, like, 10%," Brown said. "It wasn't pumping blood through my whole body."

Medications didn't fix the problem, so doctors offered him several choices, including a mechanical pump to help his heart temporarily — or a transplant. "They told me, basically, I was young and I had a lot of life left in me," said Brown, the father of two young daughters. "I actually picked the option of a heart transplant."

Brown, who had hit the gym regularly, was an ideal candidate, said Dr. Sean Pinney, co-director of the heart and vascular center at University of Chicago Medicine. "This guy was healthy except for covid, except for heart failure." Brown received his transplant in October and continues to recuperate.

Most covid-related transplants are performed on patients whose lungs have been irreversibly weakened by the disease. Thousands of covid survivors have developed ARDS, or acute respiratory distress syndrome, which allows fluid to leak into the lungs. Others develop pulmonary fibrosis, which occurs when lung tissue becomes scarred.

"What was once a scaffold of soft, living cells turns into a stiff mesh that's not capable of exchanging gases," said Song.

While conditions like pulmonary fibrosis typically develop over months or years, often in response to toxins or medications, covid patients seem to get much sicker, much faster. "Instead of months, it's more on the order of weeks," Song said.

These patients are often placed on mechanical ventilation and then ECMO, or extracorporeal membrane oxygenation, in which a machine takes over the functions of the heart and lungs. Many become stranded on the machines, so sick that their only options are transplantation or death.

Even then, not everyone is eligible for a transplant. In many covid patients, damage isn't limited to a single organ. Others have preexisting conditions such as diabetes or obesity that can complicate recovery from surgery or preclude it entirely. And, often, those who have been sedated for weeks or months aren't likely to survive the trauma of transplant.

Successful transplant candidates are likely patients younger than 65 who are otherwise healthy and whose lungs will not heal on their own, said Dr. Tiago Machuca, chief of thoracic surgery at UF Health Shands Hospital, who helped draft suggested guidance for covid-related lung transplants.

"This is a very different profile of patients," said Machuca. "These patients had normal lung function. They're young, and now they find themselves on mechanical ventilation or ECMO, fighting for their lives."

Mark Buchanan landed in that situation last fall after his entire family caught covid. His children, Jake, 22, and Lauren, 18, had mild cases. His wife, Melissa, was quite ill, though never hospitalized, and quickly had to turn to helping her husband.

"I had to rely solely on God and my family and friends," she said. "It's hard to explain how stressful it was."

Buchanan survived the transplant and then spent three months recovering at the Florida hospital. He lost more than 70 pounds and was weak. "I couldn't brush my teeth or feed myself," he said. "I had to learn to eat, swallow, talk, walk all over again."

Buchanan arrived home in January to a parade of 400 neighbors and friends. He has begun speaking to church groups and others about his fight for a transplant. Many people in his small community remain skeptical about covid. Wearing a mask and keeping his distance, he tries to set them straight.

Buchanan was one of at least 17 patients to receive covid-related lung transplants at Shands in the past year, the most of any hospital in the country. Machuca credits its dedicated lung unit, which had already focused on patients with complex respiratory conditions.

It remains unclear whether widespread vaccination will stem the number of covid patients who require transplants — or whether transplant candidates among survivors will continue to rise. There's no doubt, however, that the pandemic has changed the profile of those considered for lung transplantation, Machuca said.

"Before covid, transplanting patients with acute respiratory failure was a 'no,'" he said. "I think this is expanding the limits of what we felt was possible."